Having already covered both the quarterback and  the  running back positions as part of my big board, lets move on to my favorite fantasy position, the wide receivers. Since I have started playing fantasy, this will be my fifth year, I have always preferred to take wideouts higher than running backs due to the injury rate for backs. It just seems when you take a back really high, there’s almost a 50/50 chance that he will have a season ending injury down the road. Lets work our way up, starting with the honorable mentions to the best fantasy wideout there is. Again this is based on a standard (non-ppr) 12-team league with 2 starting receivers and a chance for a third in the flex position.

Sammy Watkins – Watkins may be lower on this list than expected, but he only ranks 21st when compared to other receivers last year. Tyrod Taylor’s struggles do affect his numbers a little, but I don’t see him as anything more than a low end WR2 until he proves otherwise. Grade – Late 6th round 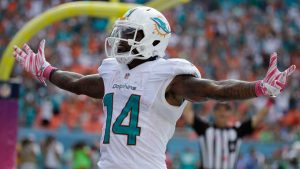 Dolphins wideout Jarvis Landry celebrates in front of the home crowd after scoring a touchdown during the 2015 season.

Larry Fitzgerald – “The Ageless Wonder” won’t be slowed down by age, but by the many mouths to feed, or hands to fill, or whatever you want to call it. The Cardinal’s receiving corps is deep and expect Fitzgerald’s numbers to take a little dip from where you are accustomed to seeing them. Grade – 6th round

Jarvis Landry – Landry had an impressive year in 2015, but his numbers will take a hit because second year pro DeVante Parker is finally fully healthy. Parker showed flashes at the tail end of last year, and he could take some focus off of Landry. Grade – 6th round

Emmanuel Sanders – Much like his counterpart that is a little bit further down, Sanders numbers will suffer a little bit from the drop off in quarterback play. He was a  borderline WR1 last year, but in 2016, he is a good WR2. Grade – Late 5th round

TY Hilton – Andrew Luck is back so Hilton should have a good year in Indianapolis. The thing that hurts him is his lack of scoring unless there is a big play. He is a less than impressive red zone target, that’s why you see him down this far on the list. Grade – 5th round

Doug Baldwin – Not many saw Doug Baldwin exploding like he did in the second half of the 2015 season. His 14 touchdowns tied him for the league lead, and he coupled that with over 1,000 yards. He’s not a flashy pick, but he’ll be solid. Grade – 5th round

Jeremy Maclin – Maclin was ranked 18th overall in the wide receiver rankings from 2015. He had a great year as a Chief (considering they hadn’t thrown a touchdown to a receiver for over a year) registering 87 catches for just under 1,100 yards and 8 scores. Grade – 5th round

Keenan Allen – Allen’s season ended in week 8 last year due to an injured kidney. The Chargers brought in some solid running mates to spread  the ball around, namely Travis Benjamin, so Allen should be a good option as your WR2 rather than a borderline WR1. Grade – Early 5th round 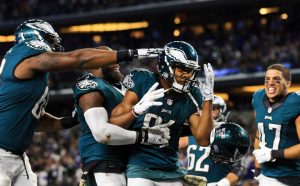 Brandin Cooks – Cooks really improved on his so-so rookie season in 2015, bringing in 84 passes for over 1,100 yards and 9 touchdowns. Expect a similar year for the pass oriented Saints. Grade – Late 4th round

Jordan Matthews – For non-Eagles fans, this may seem a bit high, but expect a building block year from Matthews. Last year his line read 85/997/8. If that improves even a little bit, he’s a really solid WR2. Grade – 4th round

Demaryius Thomas – Analyzing his stats from last year, he should be in the first tier. Two words though; Mark Sanchez. Denver’s QB play will  take a big hit with Sanchez under center. Grade – 4th round

Alshon Jeffrey – Jeffrey has a lot of talent, but he also has a lot of injuries in his past. If healthy, look for him to put up numbers like a WR1. Buyer Beware: 2015 1st round draft Kevin White is returning from injury and will be playing for the first time so this could cut into his numbers a bit. Grade – Early 4th round

Amari Cooper – As far as production goes, Cooper was 20th in the league last year, as a rookie. Derek Carr’s go to option should be able to improve on his solid rookie year and really become a household name in the receiver discussion. I fully expect Cooper to be a consistent threat in Oakland’s passing attack. Grade – 3rd round

Brandon Marshall – If we were analyzing this statisticallybased off of last year, Marshall should be much higher on this list. However, his numbers will be hard to duplicate. Marshall’s line reads like this, 109/1,502/14. As Marshall gets deeper and deeper into his 30’s, his numbers should start to drop. Also remember, last year’s stats came coupled with a career year from Ryan Fitzpatrick, so if the quality of QB play drops, that will have a direct impact on his fantasy value. Grade – 3rd round 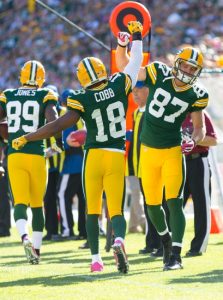 The Packers Randall Cobb and Jordy Nelson celebrate after a touchdown in 2014.

Mike Evans – The 2014 Draft was the year of the receiver, and Evans is no exception. Evans is  the go to target in Tampa Bay, and has held his own for his first two years in the league. Evans went over the 1,200 yard mark but only had 3  touchdowns to go with it. Even if does it, he will be a go to fantasy receiver. Grade – 3rd round

Allen Robinson – I’ve followed Robinson through his college days and have kept an eye on him as he went to work down in Jacksonville. While he had a stupendous year last year putting up 1,400 yards and 14 touchdowns, I expect him a take a bit of a step back just because  those numbers would be extremely hard to duplicate. Even if he  takes a step back, he’s still a viable WR1. Grade – Late 2nd round

Kelvin Benjamin – Much like the next guy on this list, Benjamin was lost before the season ever began, tearing his ACL early on in camp. Its scary to imagine what the Panthers offense would have looked like with Benjamin in it. During his rookie year, lucky number 13 hauled in 73 receptions for over 1,000 yards and had 9 touchdowns. Expect those numbers to increase in his (virtually) second year. Grade – 2nd round

Jordy Nelson – 2015 was a lost year for Nelson as he tore his ACL late in camp. Nelson forms a dangerous tandem with fellow wideout Randall Cobb, and both were supposed to have a solid season. It has always seemed that when both are healthy, Nelson was the go to target, especially in the red zone. Look for a big bounce back year from Nelson. Grade -2nd round

Dez Bryant – The Cowboys were not a 4-12 team last year, they were decimated by injuries, Bryant included. He would be higher on this list if it weren’t for his quarterbacks injury history. If Tony Romo is healthy for 16 games, you’d probably see Bryant in the top 3 receiver discussion. However, so much of his success is dependent on Romo, and I’m not confident he’ll stay healthy. Grade – Early 2nd round

A.J. Green –  A.J. Green is the guy for the Bengals. Marvin Jones and Mohamed Sanu left via free agency, and they were replaced by rookie Tyler Boyd and journeyman Brandon LaFell. Green should have another stellar season as he is smack dab in the middle of his prime. What makes him such a value in fantasy football is his double digit touchdown total from 2015. Grade – Late 1st or early 2nd round

Odell Beckham Jr. –  Without a great running game, the Giants rely heavily on Beckham and their other receivers. Victor Cruz is coming back from injury and rookie Sterling Shepard is a rookie, and its so hard to predict the impact of a rookie reciever. Beckham has a knack for  the end zone, scoring on over 7% of all his catches, and he averaged the 3rd most yards per game. Grade – Mid 1st round 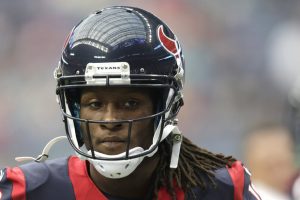 Texans receiver DeAndre Hopkins walks to the sidelines during his rookie year in 2013.

DeAndre Hopkins – Hopkins burst onto the scene last year and third in both receptions and yards, while scoring 11 times. Remember last year though the guys throwing to him were named Ryan Mallett and Brian Hoyer. The QB play in Texas should be better with free agent aquisition Brock Osweiler. With improved QB play, Hopkins could end up having the best fantasy season of any receiver. Grade – Mid 1st round

Julio Jones – Jones’ stat line through  the 2015 season was the best of any receiver, bringing down 136 receptions for 1,871 yards and 8 scores. 93 of his receptions resulted in a 1st down for the Falcons and he had 25 receptions of 20 yards or more. With Roddy White gone, Mohamed Sanu was brought in from Cincinnati, but don’t expect him to take a ton of receptions away from Jones. Grade – Top 5 picks of 1st round

Antonio Brown – When you compare stats from 2015, Brown and Jones were pretty much neck and neck in every category. The one area where Brown had Jones beat was touchdowns, where he hauled in 10 compared to Jones’ 8. Brown comes in as the number one fantasy receiver due to Martavis Bryant’s season long suspension. With Bryant, Brown was targeted a ton. Without Bryant, expect even more of the Steelers passing game to go through Brown even more. Grade – Top 3 picks of 1st round