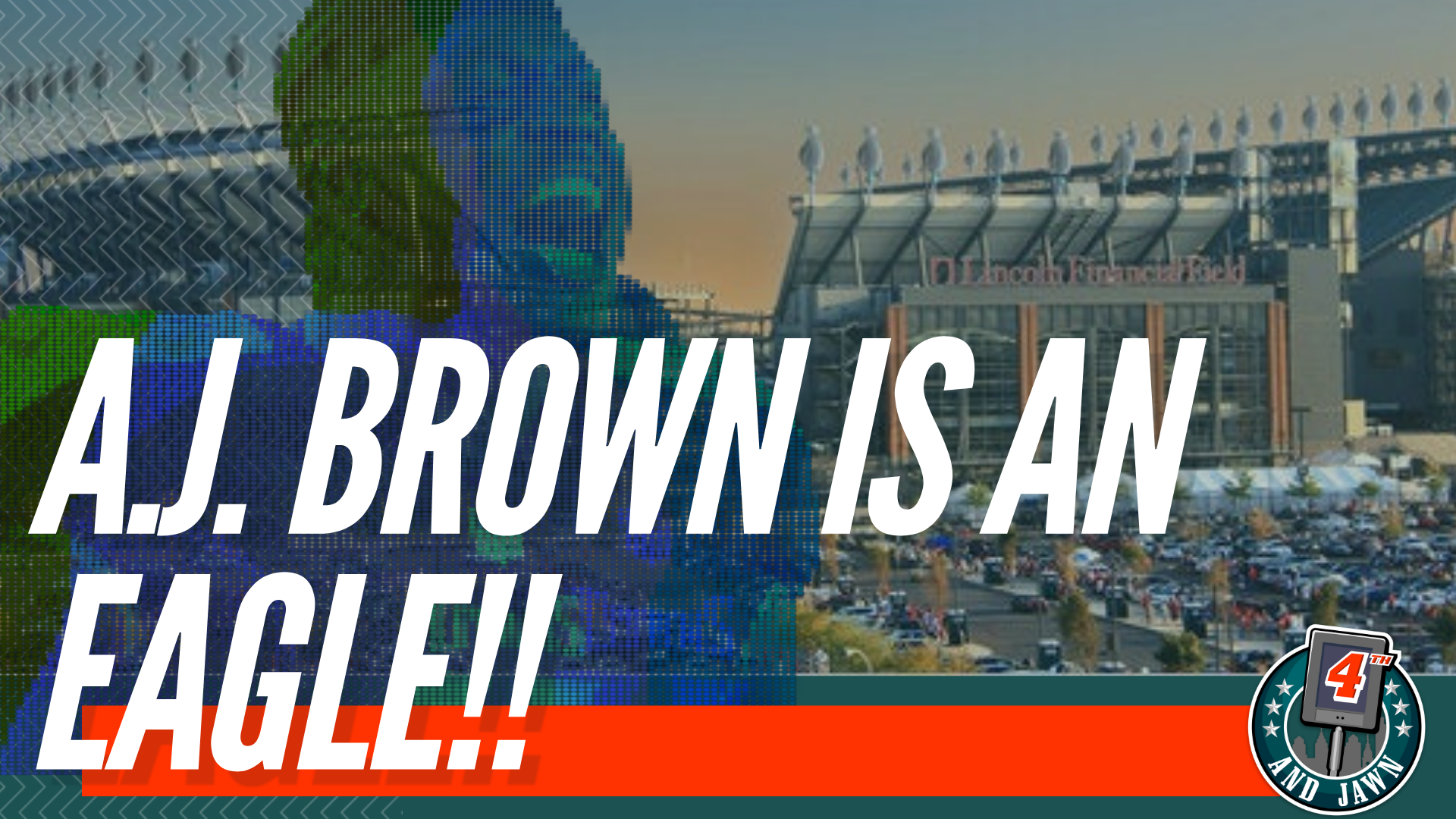 A.J. Brown is an Eagle!! A film deep dive into what he brings to Philadelphia

When Eagles GM Howie Roseman made the move for former Titans WR A.J. Brown, it caught most of us by shock (myself included!). There had been rumblings about the possibility of a move, but to see Howie work his magic and pull it off, it shows that Philly is invested in Jalen Hurts and the Eagles offense in 2022 and beyond. Brown signed a BIG contract to join Philly, and he brings a much needed skillset to the Eagles offense. As long as he remains healthy, he will be worth every penny of his contract as a bonafide alpha receiver that has produced two 1000 yard receiving seasons in a run first offense (sound familiar?).

Brown also takes a ton of pressure off of Eagles WR Devonta Smith, and allows WR Quez Watkins to slide to the WR3 position where he’s probably best suited. But instead of merely talking about what Brown brings to the table, let’s take a look at the film so we can know exactly what we as fans can expect.

A.J. Brown is brimming with strengths, but arguably the best thing he brings to the table is his big play ability/scoring potential. He’s able to score from almost anywhere on the field, and uses his route running, hands, and strength to manufacture big plays consistently. He has a total of 24 receiving touchdowns through his three years in the NFL and more than nine catches of 50+ yards since 2019.

A.J. Brown’s strength is a key reason he’s so successful as a receiver in the NFL and how he’s become an alpha capable of dominating just about any CB1 in the league. He’s a load to bring to the ground, and he seeks out contact like a running back once the ball is in his hands. He’s recorded 23 broken tackles so far in his career, and makes difficult plays look routine.

A.J. Brown is an extremely talented and effective runner with the ball in his hands, and makes big plays out of short passes on a regular basis. He doesn’t have to always catch the ball 30, 40, or 50 yards down field, when he can take a quick slant to the house. Of his 2,995 career receiving yards, 1,140 yards of them came after the catch (38%), allowing Brown to showcase his vision, speed, and power in the open field.

One of the less talked about aspects of Brown’s game is his well developed route tree and route running ability. When people think about Brown, they usually focus on his strength and big plays, but rarely his feet or how well he sells routes to get free from defenders. Coming out of Ole Miss, Brown’s route running was a plus asset, and he’s only gotten better during his time in Tennessee.

A.J. Brown’s physical play style certainly has taken its toll on him through his first three years in the NFL. He’s missed a total of six games so far, and has played through injuries in quite a few others. His injury history definitely played a role in Tennessee’s unwillingness to hand him a large guaranteed contract, as his 2021 campaign was marred by a short stint on the IR (chest) and a hand issue. He had surgery on both knees after his 2020 campaign, and has dealt with hamstring and calf issues as well. Brown’s productivity will be directly tied to how many games he’s available, as the best ability is availability. Coming off a down ’21, Brown has a lot to prove in regards to whether or not he can stay on the field and play a full 17 games.

AJ Brown (@1kalwaysopen_) went on Instagram live earlier and said he had surgery on both knees. As well as he was told he was “done for the year in like Week 2.” He mentioned he wants to be a Titan for life and how Mike Vrabel will probably cuss him out for this. 😂😂😂 pic.twitter.com/ewMjGgQ6SU

He would do walk-thrus in a wheel chair. His knees were so bad – at one point they talked about pulling the plug. But death or surgery was never an option for @1kalwaysopen_

Thru guided mediation & prayer he was able to somehow play on Sundays. One of the toughest men I know https://t.co/W6ZgFiQjsA

Titans’ WR A.J. Brown has a strained hamstring and is expected to be considered week to week, per source.

While Brown is a big play waiting to happen, he has also struggled through spells of drops in his career. It’s to be expected when you’re the primary target in your offense, but there are times when Brown clearly should make a play that he doesn’t. He’s recorded 15 drops across 295 career targets, and had two multi drop games in ’21, including a three drop outing versus Seattle Week 2. As Eagles fans the last thing we’d want to see show up on Sunday’s are drops, as we’ve had numerous players both past and present that struggled in this department.

A.J. Brown is the lead alpha receiver that the Eagles have been searching for since initially acquiring Alshon Jeffery in 2017. Devonta Smith is an incredible young receiver, but Brown brings a tenacity and aggressiveness that Philly has been missing. His strength, route running, and big play ability will also help his good friend QB Jalen Hurts grow in his second full season as a starter. Head Coach Nick Sirriani can become a lot more creative with his scheme and play calling on Sundays, with four receivers now that can play the X, Z, or slot. I was a huge fan of Brown before he became an Eagle, and I’m excited to now see what he does in Philadelphia.

I definitely understand the concerns about his new contract, including the $57 million in guaranteed money which is quite a bit for a player coming off his worst season as a pro. The injury concerns are also legitimate as Brown has missed numerous games and his physical style of play leaves him more open to injury. Add in the drops, and you start to get an idea of why the Titans were hesitant to go above their number when negotiating with Brown. All of those things aside though, there’s no way to look at this trade as anything but a positive for Philadelphia, Jalen Hurts, and A.J. Brown. Howie Roseman swung for the fences, and more than likely he hit a home run with this deal. Armed with more draft picks in 2023, Philadelphia is in a good place moving forward from a roster construction standpoint, and have added a legitimate playmaker on offense that will make all the players around him better.

Despite my overwhelming support of this trade, I did knock it a bit for Brown’s history of lower body injuries and drops. Most likely we all look back at this trade as the move that helped Philly turn the corner offensively, but it’s not like it doesn’t come with out some risk.