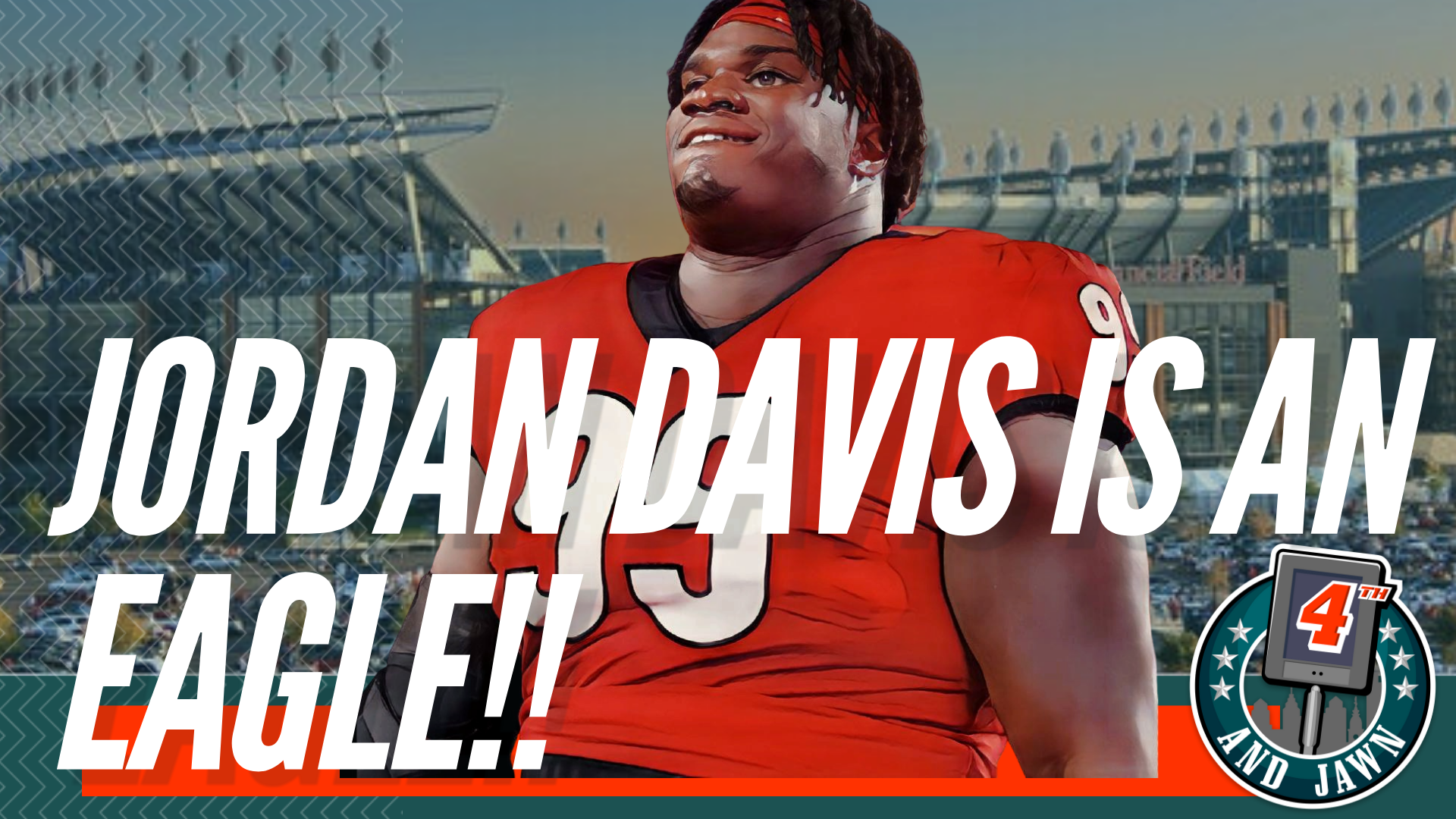 Jordan Davis is an Eagle! An analysis of what he brings to the Eagles

Jordan Davis is a player that many people (including myself) predicted could end up an Eagle on Draft day. He fits a major need on the interior for Philly and gives them a space eating 2 gap defensive lineman that can do a lot of the dirty work to free up the rest of the players around him. Davis was a stud for a STACKED Georgia defense, where he won the 2021 Chuck Bednarik award which is given to the best defensive player in the country. While his stats won’t jump out to you as truly dominant, his ability to do the necessary dirty work to keep linebackers clean is imperative for a defense looking to make drastic improvements this season.

Davis brings A LOT to the table as a run stuffer, and has some potential as a pass rusher as well as long as he can keep his weight in check and maintain his conditioning. He put on a show at the NFL Combine, where he ran a 4.78 40 yard dash at 6’6 341 lbs. Let’s take a look at what he does well, and some areas for improvement for the Philadelphia Eagles newest defensive tackle.

Jordan Davis’ ability to get his hands on the blocker first with such violence, maintain extension with those long arms while reading the blocking and departure angle, then shed him like a stuffed animal before turning on the jets for rear pursuit…it’s just not fair.

I would take Jordan Davis in the top 5 of the 2022 draft if I could. He’s a once-in-decade talent…*maybe* twice. Having a mountain with real ability playing any of the inner techniques successfully is a schematic dream for defenses and a nightmare for offenses.

He’s talented and athletic enough to play and produce in most front schemes, but I think he’ll be most effective playing anything from the 3-Tech inward, Even or Odd, Over or Under, Plus or Minus. He’ll mostly play as a NT/Zero, Shade, 1-Tech, or 2-Tech depending on the call.

When you turn on the tape Jordan Davis’s ability to stop the run really jumps out at you. He was surrounded by a lot of talent at UGA but he was the person that helped the defense run so efficiently. He took on double teams constantly, but was still able to shed blocks and make plays on a consistent basis. Davis will be asked to be a key contributor on early downs for Philadelphia, eating up space and being a clog in the middle of the defense, whether that’s as a 0 technique (nose), 1 technique, or even a 3 technique.

While Jordan Davis wasn’t tasked with being a pass rusher for UGA, he showed some get off and ability to get after QBs during his time there. He wasn’t usually required to play on 3rd downs due to better rushers on the UGA roster, but that doesn’t mean he can’t do it. He will need to improve his technique and conditioning, but his 7 career sacks shows that he isn’t just a 1 trick pony.

With out a doubt Jordan Davis’s best position will be nose tackle for Philadelphia, but he will also be able to produce as a one technique and even eventually as a three technique. That versatility will be key for him as a professional, as he will be asked to take on a more prominent role versus the pass as he develops. If Davis is able to be more that just a nose and run stuffer, the Eagles defense will have almost infinite upside with so many quality pass rushers surrounding him.

Davis has a history of weight control issues and his upside will definitely be tied to how effective he’ll be as an NFL player. Questions about whether he can be a three down contributor will come down to him being able to manage his weight, and maintain his conditioning through four whole quarters. At UGA he was able to get away with being a part time player because the Dawgs defense was stacked, but as the #13 overall pick he will need to prove he was worth the selection. Playing 20 snaps a game probably won’t net the results that Philly is searching for, so for Davis to reach his ceiling as a prospect, Philly will need him to make a serious commitment to his body.

Jordan Davis might be the most overrated defensive lineman in the history of college football and people really think he’s going to do something on Friday vs the best offensive line in the country. Please pass me whatever you’re smoking. #GoBlue pic.twitter.com/7yRND035hv

I absolutely love the Jordan Davis pick! There will always be naysayers but Davis was not going to make it past Baltimore, so Philly needed to make a move if they believed Davis was the answer in the middle of their defense. When they first moved up I thought it was for Kyle Hamilton, but to be honest with a player like Honey Badger still available as a free agent and other safeties available Day 2, this was probably the right selection. Jordan Davis changes the Eagles defense in a multitude of ways, and provides Jonathan Gannon with a key piece in the middle of his front 7.

Davis’s upside will be directly tied to his weight control and conditioning though, and if he’s unable to keep his weight under control that will severely limit what he’ll be able to do long-term in Philly. However, I think (as the Eagles clearly do as well) that he will be able to not only keep his weight in check, but also add more to his game to refine his pass rushing ability. I’d expect for Davis to pick up Hassan Ridgeway’s vacated 373 snaps (33%) at the very least, and provide a long term replacement for Fletcher Cox moving into 2023 and beyond.