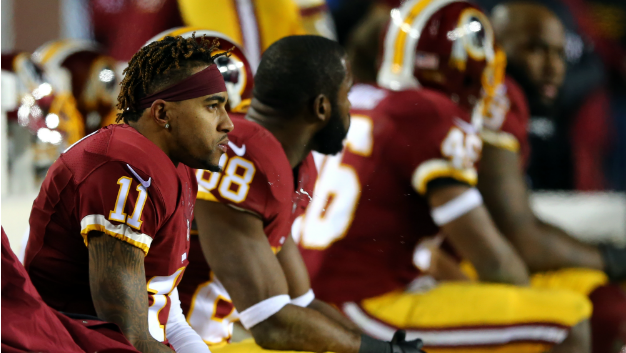 Flashback Friday: The history of DeSean Jackson vs the Eagles

The Eagles drafted DeSean Jackson 49th overall in the 2008 NFL draft, and was a spark plug for this team for the next 6 years. He provided one of the biggest plays in franchise history, returning a punt 65 yards for a touchdown with the clock running out to beat the New York Giants, completing one of the biggest comebacks in NFL history.

When Chip Kelly was hired as the Eagles head coach in 2013, him and Jackson never got along. The feud ultimately ended in Jackson’s release from the team, which resulted in him signing with the division rival Washington Redskins. Since Jackson was cut from the Eagles, he has come back to haunt them every time they have met.

DeSean Jackson has put up stellar numbers against his former team. He has racked in 20 catches for 440 yards and 2 TDs in 5 games, averaging 22 yards a catch. The Eagles have struggled to contain Jackson, as he is one of the best deep threats in the league.

Now, the past is the past and many of the defensive backs are gone from the team Jackson played against, but it is telling that Jackson tends to play his best games against the Eagles. Jackson had an ugly divorce with this team, and it is no secret every time he is on the field against the Eagles he makes it his mission to show how big of a mistake Chip Kelly made.

DeSean Jackson suffered a concussion against the Saints in week 1, but had a huge game before suffering the injury. Jackson torched the Saints for 146 yards and 2 TDs on 5 catches. He was a huge reason why the Buccaneers were able put up 48 points on one of the better secondaries in the league.

It looks like Jackson is going to play against the Eagles, after practicing Thursday and Friday. When a player is practicing on a Thursday, it is a telling sign that player will be ready to go on Sunday. The Eagles will have to slow down Jackson in this game to have success on defense. Jackson stretching the field opens up the whole offense, and if he can get open deep, the Eagles defense will be in tough. Lets hope history does not repeat itself on Sunday.