Winning in the trenches: Offensive Line

As fans, we love the bells and whistles- the skills positions.The flashy plays made by the running backs and wide receivers are always the thing that makes us stand up and cheer. However, the offensive line makes those plays possible.

In free agency, the two players that you think about when you speak of additions to the Eagles roster are Alshon Jeffrey and Torrey Smith… and for good reason. We needed wide receivers.

They are not who this article focus on though.

I know Jeffrey Lurie donated money to the Hillary Clinton campaign but his team is building a damn wall to protect Carson Wentz this offseason.

In free agency the Eagles were able to bring back OG/C Stefen Wisniewski, who was on the 2016 roster and also signed OG Chance Warmack.

The Wisniewski deal made a lot of sense. He had a solid year when he got on the field and he has the versatility to play Guard and Center as a depth guy. Considering the contracts other offensive linemen in the league got, Eagles were able to sure up their offensive line depth and lock down a competent starter to protect Carson Wentz.

Chance Warmack, a former 1st round pick, didn’t pan out with the Tennessee Titans. As a Bama player he was a top target in the 2013 draft. So what changed? We do not know what player we will be getting – a very capable starting Guard? Someone to push Isaac Seumalo in competition for the starting gig? Just a depth guy and nothing more? That is yet to be determined. What we do know is that Warmack will be coached by the guy who made him a dominate college left Guard. Jeff Stoutland, Eagles offensive lineman coach. Warmack’s deal is team-friendly and gives the Eagles a chance to see if he could be the long-term answer.

Chance Warmack says he hopes to recreate the magic that he had at Alabama with OLine coach Jeff Stoutland.#Eagles? pic.twitter.com/jqYQSQchkP

#Eagles have signed 10 undrafted free agents ahead of this weekend’s rookie mini-camp. #FlyEaglesFlypic.twitter.com/NkOGHPA6PY

Other guys to monitor for competition on the O-line this offseason are: Taylor Hart, who played on the defensive line but was flipped to the offensive side of the ball directly after the 2016 season, and Dillon Gordon, who played TE in college but has been developing as an OL at the next level, much like what Jason Peters did.

Overall, it is evident the Eagles wanted to invest in building the trenches and finally have a competent depth. With Lane Johnson and Jason Peters anchoring the tackle positions, there is not much depth at the tackle spots but Eagles have definitely improved the interior line in a big way.

According to Philadelphia Eagles website, the team has 17 potential OL on the current roster: 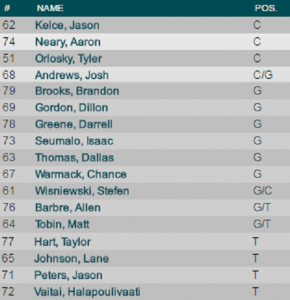 It has been a long time since the Eagles won in the trenches on both sides of the ball. 2017 may be the season that changes.