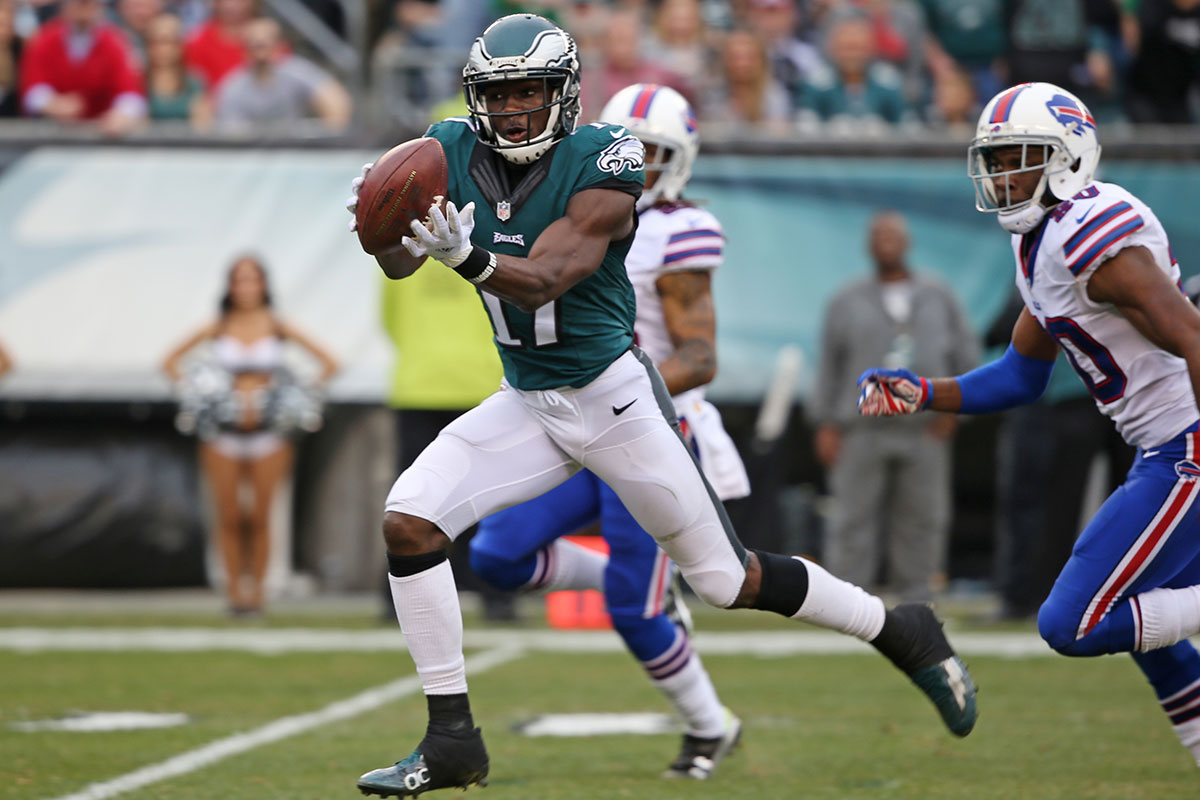 Do the Eagles have enough firepower at receiver?

It is fairly safe to say  that the Eagles have enough to “get by” on defense unless something unforeseen happens over the course of the season, like a rash of injuries. However, perhaps the biggest question surrounding the Birds is “is there enough talent at the skill positions on offense to be able to consistently score points?” Many feel the answer is no, but let’s take a little closer look at the Eagles receivers and see whether they will help the offense fly, or die, in 2016.

Jordan Matthews had a great year last year manning the slot receiver position. I expect him to put up numbers that are improved in 2016, but the worst case scenario for him would be a statistically repeated season this year so let’s just say he goes 85/1,000/8 (catches/yards/touchdowns). If Matthews produces those numbers, one of your 3 spots is in great hands. 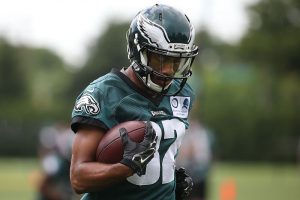 Eagles receiver Rueben Randle runs during drills in offseason OTA’s. The 5th year wideout is in his first year in Philly.

The second open spot should be won by free agent acquisition Rueben Randle, who put up fairly consistent numbers during his time in New York as a Giant, especially if you take away his rookie year (which is considered by most to be a learning year anyway for rookie receivers). Over the last 3 years, Randle is averaging 59.6 catches a year to go along with 782 yards per season and just under 6 touchdowns.

Now is Sam Bradford on Eli Manning’s level of quarterback play? No, so his numbers may dip a little but, but look for Randle to put up a line that goes something like 55/700/5. What would have happened last year if a receiver put up those numbers alongside Matthews, winning record anyone?

The third starting receiver position is where it gets a little tricky. Who wins the job and who ends the year with the job very well could be two different Eagles, but let’s look at who’s fighting for the spot. Second year pro Nelson Agholor is really the key to the whole shebang.  Agholor has been getting praise thrown his way from the coaching staff and his fellow receivers. He’s described as a “quick twitch athlete” who can create separation against press coverage. Will we see that expected  jump in production in 2016, or will it be underwhelming just like his rookie year? It’s safe to expect a year like the one described for Randle, just a little bit less. I believe Doug Pederson will make a concerted effort to get the ball to Nellie in open space and let him make big plays. So what if the Eagles can get a year like this from Agholor, 45/600/4? I think they’d take it.

Newcomer and veteran Chris Givens provides both leadership and speed to a receiving corps that needs a little bit of flash to it. Is Givens an ideal starter? I don’t see him as  that, but I do see him as a viable threat in 4 and 5 wideout sets. Another fringe candidate would be “Chip Kelly guy” Josh Huff. There is no denying that Huff is great with the ball in his hands, but that’s just the trouble. Any beat writer will tell you that Huff has made his fair share of drops so far in camp, and I have to imagine that’s not putting a great picture in the coaches minds. Pederson has said they’d like to get him involved in the screen game and on jet sweeps, much like the Rams deploy Tavon Austin. Again, he will most likely be seen more in 4 and 5 receiver sets, much like Givens.

So if your  three starters are Matthews, Randle and Agholor, and they produce the aforementioned stats, the trios’ total’s come to 185/2,300/17. How would those numbers  stack up against other teams top three receivers? Lets analyze briefly. 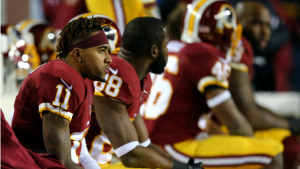 Redskins receivers DeSean Jackson and Pierre Garcon during a game in 2015.

The Cardinals starting three of Larry Fitzgerald, Michael Floyd and John Brown had a line of 226/3,067/22 in 2015, but why don’t we look at a couple of teams that were more in the middle of the pack as far as passing goes. We’ll start with the Giants, and then move onto the Dolphins and Redskins.

Here is what the line looked like for DeSean Jackson, Pierre Garcon, and Jamison Crowder: 161/1,909/12

The quarterbacks for all four teams listed above threw for a good bit over 4,000 yards and these were the numbers for their top three receivers. As you can see, if the Eagles receivers can get to the level where they have been over their careers, minus Agholor who is looking to ramp up his career, it certainly looks like they should have enough weapons to make defenses respect the passing game enough to make the ground attack relevant.

The reasoning for this article is provided by the Law of Averages, but now its up to the Eagles pass catchers to fulfill that law. The group will be one of the more interesting to watch over the course of camp and early on in the season.