Alright everyone, welcome back for week 2 of our gameday preview for the Eagles vs. the Rams. The Birds had a rough week, losing to the unnamed Washington Football Team 27-17, and there is definitely a lot of righteous indignation aimed at how they played, specifically about play-calling issues, scheming Wentz out of the pocket, and of course, the Swiss cheese-esque offensive line that got Carson sacked eight times.  We move on to week 2 though, so let’s dive right into how to beat the Rams this Sunday.

In stark contrast to last week, everyone is no longer healthy.  The Eagles had no less than SEVEN starters injured by the time the game finished last weekend, in comparison to the rest of the league which had no team missing more than three starters. It looks like the injury bug is alive and well for the Eagles, who seemingly made a deal with the devil in 2017 that resulted in a Lombardi trophy, but at the cost of losing at least eight guys to injury per year!

The line is currently a pick em, though it started as Eagles -4, made it’s way to +1 and has started moving back since, with an over/under of 45.5. The Eagles have recently played the Rams very well, and have not lost to them since 2004. We of course remember the 2017 game where Wentz tore his ACL, and in 2018 Nick Foles and Alshon Jeffery led them to victory as well.

The Birds have to be wary of a strong passing attack from the Rams as well as the menacing figure of Aaron Donald vs a hopefully stronger line helmed by a returning Lane Johnson. We obviously don’t need to see things like the below image again either. 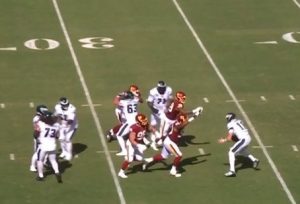 Keys to the Game:

~Stop Aaron Donald: This is clearly far and away the most important thing the Eagles need to do to win this game. Yes it’s true that Donald has no sacks against the Eagles last few times they’ve played. That mostly came from an offensive line that was vastly superior to the current one. No Brandon Brooks, a slower Jason Peters, and a possibly hobbled Lane Johnson doesn’t inspire all the confidence, but if they can keep him at bay, the offense shouldn’t fall apart like it did last week.

~Improve the play-calling from last week: the play-calling from Dougie P last week was so bad that I actually thought he was trying to make things harder for Carson Wentz.  Scheming Wentz out of the pocket, which was a major strength for a guy who actually creates better on the run than he does in the pocket, was nonexistent on Sunday, and that needs to be corrected with the o-line at half strength. Having Miles Sanders back will help a ton, as the running game sucked as well and needs to be much more efficient to let Carson move the offense down the field.

Miles Sanders: Like I just said, having Sanders back is huge for this team. Boston Scott just isn’t a workhorse type back and it showed on Sunday, but Miles is, and he makes this offense move so much more efficiently.  Having him will prevent Wentz from having to throw it 50+ times, which almost always ends in disaster, and hopefully he’ll continue to pick up in pass protection, which also was a major issue last weekend.

Jason Kelce: In most cases, Kelce is going to be the primary line of defense against Aaron Donald, and he has held up remarkably well in the last few meetings. Kelce is of course one of the best centers in the entire league, and he needs to be on his game against one of the most fearsome pass rushers the game has ever seen, otherwise we may see a similar version of what happened last week.

Nickell Robey-Coleman: NRC’s matchup against Rams’ beast slot man Cooper Kupp is going to be a fun matchup to watch.  Kupp has had a very hot start to his NFL career, but he has never played against Robey-Coleman, and it’s very possible that there isn’t a corner that knows him better than NRC does.  Kupp had a league-high 37 third down receptions last year, and NRC will have to play to his usual high standards against his former teammate.

It’s very clear to me that I misjudged how flat the Eagles came out last week, so I want to be more conservative here. I think the Eagles get back on track here, but they need to come out quick and really protect Wentz better this week. This is a winnable game for this team, and they need to avoid falling into a tough 0-2 hole here.  As long as they get the running game going, this should be a much more palatable outcome this week.