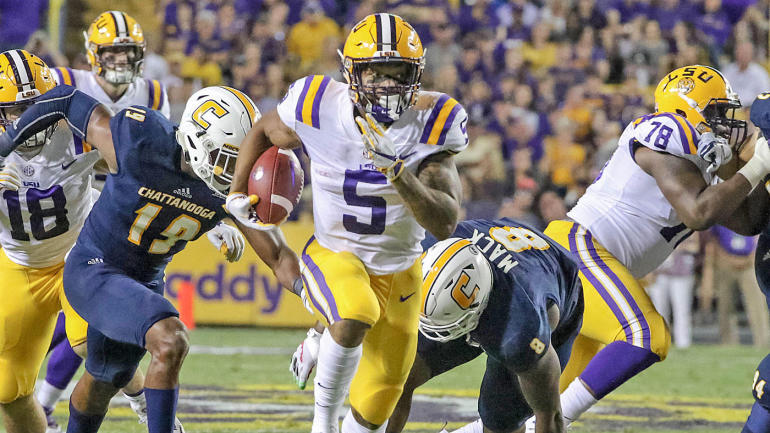 We have just a little over two weeks until the NFL Draft and the Eagles still having everyone guessing. No one knows which direction they will be going with their pick. ESPN’s Mel Kiper Jr. released a third mock draft and in each of the three, he has the Eagles selecting a different player.

In his latest, he has the Eagles selecting LSU running back Derrius Guice.

“Philadelphia’s second-round pick goes to the Browns from the Carson Wentz trade (I think GM Howie Roseman & Co. are just fine with that), while its third-round pick is in the Bills’ hands as a result of the Ronald Darby-Jordan Matthews swap from last year.

Hear me out on a running back with the last pick in the first round: A knee injury caused Jay Ajayi to drop in the 2015 draft, and while he impressed after the midseason trade from Miami, I don’t think we can automatically slot him in as the Eagles’ top back for the next five years. Corey Clement, Wendell Smallwood, and Donnel Pumphrey are also on the roster, but none are as talented as Guice, who I think can be a much better pass-catcher than the LSU offense allowed him to be. Guice would add to an already-loaded offense.”

“I think he’s the best runner in the draft. He’s not the best overall player at the position, but as a runner, it’s hard to find a better one in this class. From his balance, body control, explosiveness, and strength, he can do it all with the ball in his hands. … He finishes his runs violently and repeatedly runs through contract. That’s exactly what you want your top running backs to do.” — NFC personnel director

Imagine adding Guice to the Eagles backfield of Jay Ajayi and Corey Clement and possibly Darren Sproles. The Eagles would take one of the NFL’s best offenses and make it a whole lot better. Although there is no guarantee Ajayi is an Eagles following next season, with Guice, the Eagles have the NFL’s best running back group.