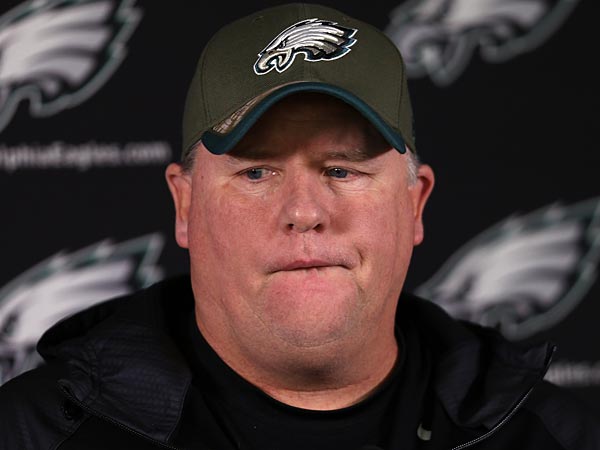 Let me describe somebody to you and tell me if these characteristics remind you of someone pretty prominent recently in Philadelphia Sports.

If you were asking somebody from Miami, Adam Gase fits the mold of this description.

Who else does it sound like though? I’ll give you a hint, go back three years ago to the Philadelphia Eagles.

A certain head coach who pushed out now executive of the year Howie Roseman for power over all player personnel, traded away star talents in Eagles all-time leading rusher LeSean McCoy, and DeSean Jackson.

Someone that had so much faith that his offensive system could dominate in any level of football, it didn’t matter what kind of talent was on the offense. His belief in the scheme over talent was so strong that you never heard him take responsibility for faults in the offense, always blaming lack of production on execution.

He loved “his guys” and wanted to be the face of the franchise. He hated dealing with big personalities.

If you guessed Chip Kelly then you are correct. Your prize is a Super Bowl championship courtesy of the 2017 Philadelphia Eagles.

The path Adam Gase has taken in Miami is so similar to Chip Kelly’s in multiple ways.

After a 10-6 season with a playoff berth in his first year as head coach, Gase couldn’t replicate the same success in 2017.

Ryan Tannehill went down with a leg injury before the season began and Gase thought it would be a good idea to bring in one of “his guys” in Jay Cutler, fresh off announcing his retirement from playing in the NFL and decided to cover the NFL for Fox Sports.

Miami suffered injuries, and suddenly there were “culture problems” that nobody had heard about during their 2016 playoff run.

Culture clearly is a priority to Gase, but if he believed players like Jay Ajayi and Jarvis Landry were headaches, and a lack of an established culture was in Miami, how did they make the playoffs in 2016?

Here is an equation for you, talent=winning= a healthy culture.

Gase cast out Ajayi to the Eagles for apparently taking issue with his workload and being a nuisance in the locker room.

This character defamation of Ajayi seems suspect as he was never a problem in Philadelphia despite being part of a three-man rotation.

Then in the off-season, he traded Jarvis Landry to the Browns, and let Ndamukong Suh and Mke Pouncey go into the open market.

Ajayi and Landry were the two most productive offensive weapons in the Dolphins 2016 playoff season and were seen as “alpha males” in the locker room.

That was a problem apparently and now neither are on the team, making the offense a lot less talented.

Ironically, Gase says he wants more “alpha males” in the locker room that won’t tolerate some of the stuff that went down last year.

If each move gets put into a vacuum, trading Ajayi and Landry made sense individually.

Ajayi has had knee issues throughout his career and will be a free agent in 2019.

Landry has incredible numbers, but he is slot dependent, with limited big play ability. His stats say he is a number one receiver but like Jordan Matthews, he doesn’t impact the game in a big enough way to command $14+ million annually.

It’s just very hard to believe that their personalities and his style of coaching weren’t a primary reason for their departures.

In a press conference, Gase once claimed that there were three hot heads on the team, Ajayi, Landy, and himself.

Only he remains, and the talent on the roster has suffered.

Sounds a lot like Chip Kelly’s reconstruction of the 2015 Eagles roster.

If there is one thing that Gase did which Chip couldn’t do, it’s replacing a talented running back with Gore. Too soon?

His emotional intelligence is off the charts (something Owner Jeffery Lurie pointed to after the season). The culture of the locker room form around the personalities and characteristics of the players in it, rather than trying to get everyone to conform to the pre-determined idea of what the locker room should be like.

Players want to come play for Pederson. Guys like Ajayi who supposedly had issues with Gase can come into Philadelphia and fit in like they have been with the team for years.

No longer do players have to deal with a head coach going behind their back, controlling every aspect of their job like they did with Chip Kelly.

A former Eagles offensive-lineman that played during the Chip Kelly era told me a story about how Chip Kelly lost the locker room back in 2015, being dishonest with players about certain testing that was done.

“So we used to have to pee in a cup every morning to test hydration levels. One other bad thing about Chip, extreme micro-manager. Anyway, he had the sports science guys get up at a team meeting cause people were bitching that every day for 3 years we’d been peeing in cups and we were getting sick of it. They told us the hydration testing sticks they had were these fancy German things, could tell not only the temperature and pH level but also the chemical composition of your pee, if you drank more Gatorade or water, if you had coffee that morning, alcohol, etc. Cant do that to smart guys with money and influence. A bunch of starters tracked the company down, bought their own hydration sticks, and did some research. The sticks only measure temperature and pH, and the pH readings had like a +/- error percentage that made them relatively unreliable. No one trusted him after that.”

Hopefully, for Dolphins fans, Gase doesn’t turn into the same power hungry feen that Chip Kelly did or it might take a miracle roster construction from a Howie Roseman type to get Miami back to prominence.

How far the Eagles have come from this kind of stuff in two years no?