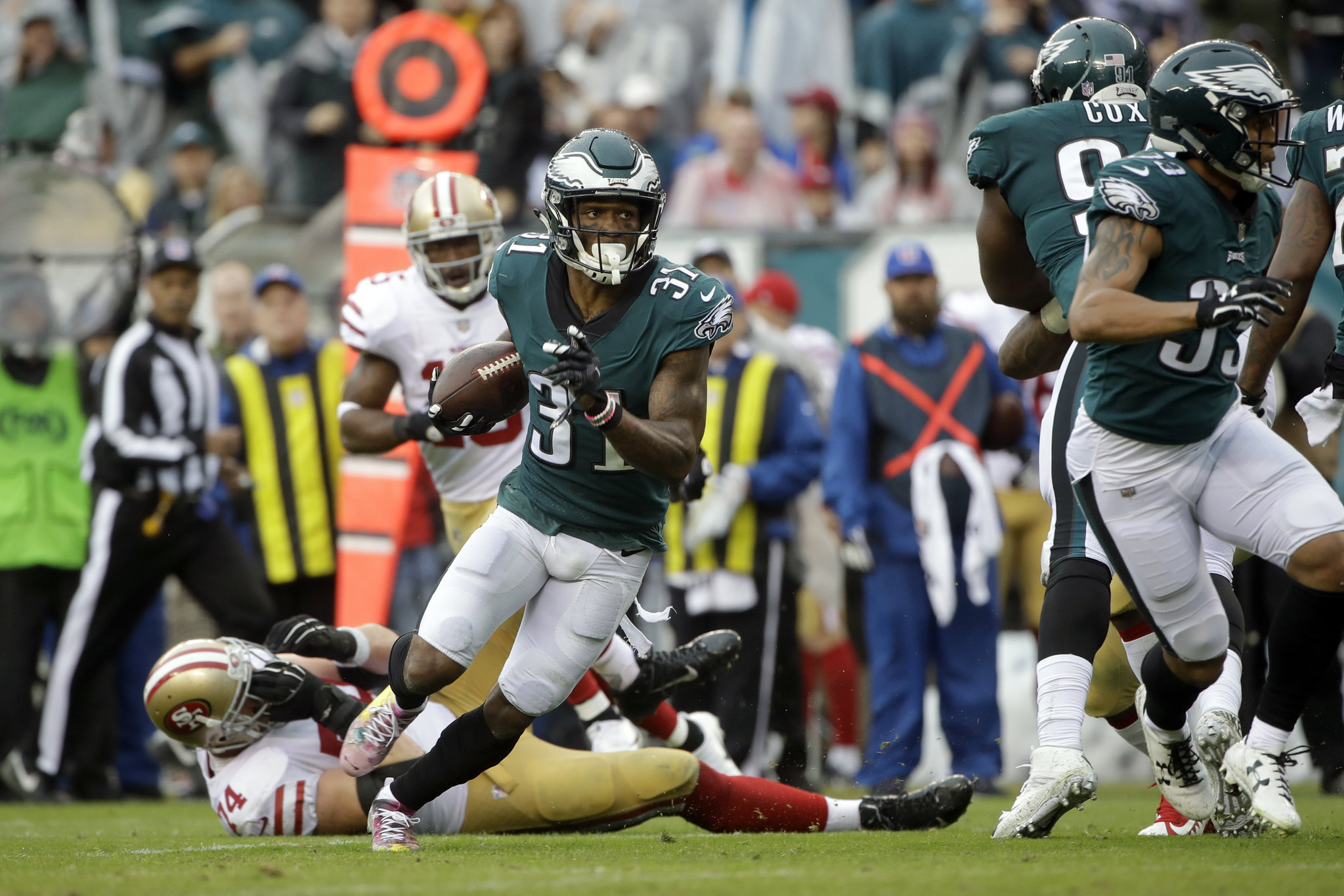 Follow @DiBisportstalk
Is anybody else’s head spinning with the different routes the Eagles can take in the secondary this year?

I am going to take on the challenge of breaking it all down.

God speed. I apologize in advance if your head hurts even more after reading this.

Even after 2017 starting slot cornerback Patrick Robinson agreed to a contract with the New Orleans Saints, the Eagles still have depth and optionality at cornerback.

The Eagles are still five corners deep without Robinson. All of whom are under the age of 25.

It is a great problem to have, but Jim Schwartz and Howie Roseman do have some questions to answer before the season begins when it comes to defensive backs, and how the backfield will shape out.

Who will start on the outside? Who will replace Patrick Robinson in the slot? Can any of these guys move to safety? Could Roseman get a decent draft pick for one?

The starting outside corners for 2018 is a question mark despite both 2017 starters still under contract in Mills and Darby.

Mills is probably the best corner on the team at this very moment.

Yes Sidney Jones has more potential, and Ronald Darby may have better physical attributes, but Mills has severely outplayed his seventh round selection while becoming a leader in the locker room.

His growth in year two had Jim Schwartz and the Eagles raving about the former LSU Tiger all season. And he capped that tremendous season off with an elite playoff run.

While Mills may be the most polished corner on the team currently, he has the most versatility of any, playing safety at LSU, and being projected by many scouts as a slot corner when he was drafted.

That likely means the Eagles will use the Green Goblin to either replace Corey Graham as the third safety (which is a big role considering Graham played 36% of the defensive snaps while Malcolm Jenkins moved around the field), and/or he will replace Patrick Robinson in the slot.

One of two things will likely happen with Ronald Darby. He will either be a starter on the outside, or he will be traded.

Are the Eagles really going to pay Darby a $11-14 million dollar contract annually? Spotrac.com has Darby’s estimated value at $13 million per year.

If Roseman could get a 3rd back which he originally gave away in last year’s trade with Buffalo, or even a 4th, Darby should be moved.

Philadelphia currently only has one pick in the first three rounds so every pick is valuable.

Add that to the eventual Carson Wentz pay-day, and free agents like Jay Ajayi, Nelson Agholor, and Jordan Hicks hitting the open market next year,  and suddenly keeping Darby is a luxury more than a necessity.

This isn’t a stretch either. ESPN’s Chris Mortensen told 97.5 The Fanatic that he wouldn’t be surprised if a defensive back isn’t moved.

Darby showed flashes of his Asante Samuel-like play making ability with big performances against Dallas, Oakland (sealed the game with an interception), and played pretty well against Atlanta and Minnesota in the playoffs last season.

There were however more negatives than positives. In a five week span towards the end of the season, only two cornerbacks allowed more passing yards than Darby, with only one corner allowing more receptions.

Brady had his way with the former Bill in the Super Bowl, and he couldn’t contain Rob Gronkowski in the second half like Jalen Mills did in the first.

The Eagles could try and move Darby into the slot with his rare speed, but it is more likely he gets one of the outside jobs or is traded considering he is the only corner not under contract next season.

2017 third round pick Rasul Douglas also started on the outside last year after Darby went down in the season opener with an ankle injury.

Douglas impressed with his ability to play aggressive man coverage, finishing the season with 2 interceptions and 11 passes defended.

Like Darby, Douglas showed his ball-hawking ability that made him an early pick in 2017, leading the NCAA in interceptions at West Virginia with 8 picks in 2016.

The rookie should have had more interceptions, with a few big opportunities dropped as seen in this highlight reel.

While Darby uses his 4.3 speed to make plays, Douglas relies on his length and size to jump routes and handle receivers at the line of scrimmage.

With Douglas, the Eagles only really have two options. Move him to safety or play him on the outside.

Players with his size and lack of speed tend to struggle in confined spaces like the slot. Smaller, quicker corners like Patrick Robinson, Brandon Boykin, Joselio Hanson have been used by the Eagles in the past at the position.

While he is known for his size and play making ability, Douglas is also a very underrated tackler. If the Eagles wanted to use Jenkins in the backfield more, Douglas could be used at linebacker in dime looks like Jenkins was last year, or you play him deep with Jenkins continuing his movement around the formation.

Sidney Jones is the golden goose of the group. BGN Radio’s John Barchard expressed my feelings about Jones perfectly.

Whatever the #Eagles end up doing at CB, the moment Sidney Jones gets on the field we won't remember anyone's name anymore anyway.

Jones was a second round pick only because of his Achilles injury last February. Without that, the Eagles likely would have had to move into the top 10 to get the Washington corner.

With a full season of rehab, and a game under his belt against Dallas (where he held his own against Dez Bryant), I think the Eagles are ready to give Jones every last shot at being one of the two outside corners next season.

The former Huskie has the speed to play in the slot, perhaps in dime formations we could see Jones and Mills on the inside while Douglas and Darby/Worley line up on the outside.

Daryl Worley is a guy that like Douglas, the Eagles only think about using in two ways. Safety and outside corner.

Our own Mal Davis broke down Worley in the film room and highlighted a struggle in speed and quick change of direction,two of the most important parts in being a slot corner.

Worley thrived in other areas however.

A number of different things could happen in the secondary before the season starts.

Many members of the media have taken to Twitter, hoping to get an idea of how the defensive backfield might look in 2018.

With Patrick Robinson headed for Saints, Jalen Mills expected to be moving inside to slot next season, with Sidney Jones and Ronald Darby outside. Will be interesting to see if Eagles give either newcomer Daryl Worley or Rasul Douglas some spring snaps at safety.

Agree, Domo. I could see Worley or Douglas competing for the dime safety spot that Corey Graham held down last year. https://t.co/5hMgzLV8n4

The Eagles will use lot of formations and throw these guys all over the field during the summer before the depth chart is set.

Right now, this is my guess at the secondary conundrum.

Ronald Darby is traded: The Eagles get a 4th round pick from the Seattle Seahawks.

Sidney Jones and Jalen Mills start on the outside in two receiver sets.

Mills is the slot corner in three receiver sets (most teams have three receivers on the field at least each play) while Daryl Worley plays the outside.

In 4 receiver looks, Douglas and Worley play outside corner, pushing Mills and Jones inside.

Having a depth situation (won’t say problem because it isn’t one) at corner is an amazing luxury.

Especially when taking into account all five are on their rookie contracts (Darby for one more season, Mills and Worley with another two, while Douglas and Jones have three more years left.)

It allows the defense to be creative, to keep Malcolm Jenkins playing safety, or have one of these corners taking his place when he heads to dime linebacker, or shadows receiving running backs and tight ends.

Either way, the Eagles are going to be just fine in the secondary which for the first time in a long time is a reality.