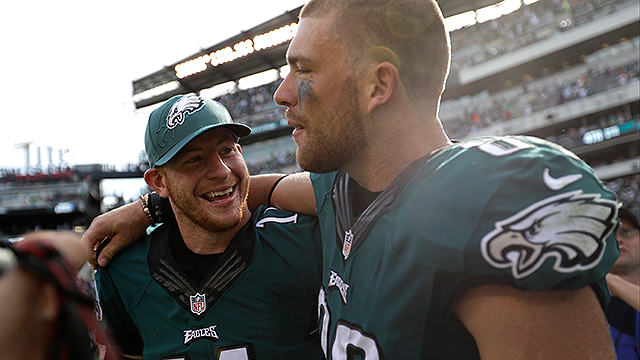 The Eagles’ MVPs halfway through the season.

We are halfway through the Eagles’ season and the birds sit alone with the best record in the NFL at 7-1. I decided to give my take on some of the MVP candidates for the team at this point in the season.

The second-year quarterback from North Dakota has taken huge strides since his rookie season and is in the MVP conversation for the NFL. Carson has been a playmaker since his first snaps in the NFL, but it’s strikingly obvious that the game has slowed down for him this season. The biggest improvement since last year has been the decision making of the quarterback. In his rookie campaign, Wentz finished the year with 16 touchdowns and 14 interceptions. In only eight games this season, Wentz has already thrown for 19 touchdowns and just 5 interceptions. Those 19 touchdowns are tied for most in the league with Houston’s Deshaun Watson.
Carson has been racking up a ton of yards threw the air this season as well, his 2,063 passing yards rank third in the NFL behind just Tom Brady and Alex Smith. One big criticism of Carson Wentz last year was the concern on his deep ball accuracy. He has definitely made a jump in that regard this season as Carson is tied for 2nd in the NFL with 7 passes of over 40 yards. Wentz has been especially impressive on third downs. 80% of Carson’s completions on third down have resulted in a first down. Some of his most memorable plays of the season have come on the down including 8 of his 19 touchdown passes. From week one in D.C when he scrambled around on third and twelve to hit Nelson Agholor for a 58-yard touchdown, to his escape of pass-rushers and unreal throw to Corey Clement in the endzone on third and goal for a touchdown during Monday night football at home vs the Redskins, Wentz has been sensational on third downs. Third downs are crucial in the NFL and because of the magical play of Wentz the Eagles have a 48% conversion percentage, which ranks them 2nd in the NFL only behind the LA Rams. Stats aside, Carson has had some incredible plays this season using his big frame and supreme athleticism. If Carson continues to play at this high level the birds should continue to win, and Wentz will have a legitimate shot at MVP of the league.

The breakout year we have been waiting for has finally come for Zach Ertz. The fifth-year tight end has been a nightmare for linebackers in coverage and seemingly always finds the soft spot against zone coverage. Zach Ertz has been dominating this season when it comes to the receiving game. Ertz leads the team in both receptions (43) and receiving yards (528). That puts him at 2nd in the NFL among tight ends in both of those categories only behind Travis Kelce of the Chiefs. Ertz is however leading the league in touchdown receptions for tight ends with six. Carson Wentz and Zach Ertz have both said they’re very close friends off of the field. That friendship they have formed has translated to great chemistry with each other on the field. Ertz has become Wentz’ security blanket this season and Carson is always aware of where he is on the field. Ertz has been targeted by Wentz 64 times which is the most on the team and when the two hook up good things happen. 29 of Ertz’ 43 catches (67%) have resulted in first downs. The surprising part of the production from this duo is WHEN most of it actually comes. The key play for Ertz and Wentz this season has actually been first down. 18 of Zach Ertz’ 43 catches (42%) and 258 of his 528 yards (49%) have come on the first down. It appears as if the two friends have made it a point to attack defenses early and often which has been a major part of this offense’s success this season.

Jake Elliott has been the definition of finding a diamond in the rough. The hip injury that Eagles kicker Caleb Sturgis suffered in week 1 vs the Redskins turned out to be a blessing in disguise. After the Eagles found out the severity of the Sturgis injury they were forced to find a new kicker and they did. The birds signed Jake Elliott off of the Cincinnati Bengals practice squad and they appear to have made the best decision possible. Elliott is 16 of 19 on field goal attempts this season and the majority of his attempts haven’t been chip shots. Elliott is 13 of 15 from 40+ yards including his 5 for 6 on fields goals over 50 yards. Elliott’s 5 makes of over 50 yards are tops in the league, and for a kid who was on a practice squad less than two months ago that is pretty insane. Kickoffs have also been a strength for Elliott this year. The rookie kicker from the university of Memphis has kicked off 44 times this season with one of those being a successful onsides kick in Kansas City. So really, Elliott has 43 total kick offs and out of those, 30 of them have resulted in touchbacks. So only 13 (30%) of Elliott’s kickoffs have been returned by opposing teams. That 70% touchback rate is a large jump from Caleb Sturgis’ 55% mark last season. The Eagles’ opponents usually starting at their own 25 yard line has been extremely beneficial to the defense and the team’s field position as a whole.

The NFC’s defensive player of the week has been playing at a number 1 cornerback level all season long. Jalen Mills has been an integral part of the Eagles’ defense that is tied for 5th in the NFL with nine interceptions. Mills aka the “Green Goblin” leads the team with 3 interceptions including one that he returned for a touchdown in their 33-10 victory last week vs the 49ers. Not only does Mills lead the team in interceptions but he also leads the team in pass breakups with 10 on the season. It’s not just in the pass coverage however that Mills shows his ability and importance. Jalen is one of the best tackling-cornerbacks in the NFL and never hesitates to crash down on a ball carrier and bring them down. The second-year corner, who was the Eagles’ 7th-round pick in the 2016 draft out of LSU, is only 4 tackles behind Eagles linebacker Nigel Bradham (46) for most on the team. With 42 total, Mills has the second most tackles in the NFL as a cornerback trailing only TJ Carrie (45) of the Oakland Raiders.
It’s rare to find a secondary player who can blanket a top flight wide receiver on one play and then come barreling down into a running back to make a stop in the backfield on the next play and that is exactly what the birds have in Mills. That combination of coverage skills and zero hesitation tackling is what makes Jalen Mills one of the MVPs of this team halfway through the year.

Howie Roseman’s year started with free agency and the NFL draft. Roseman drafted for the future with the Eagles’ first two picks. The team selected defensive end Derek Barnett from Tennessee in the first and University of Washington cornerback Sidney Jones in the second round who many experts had as a high first-round talent, but slid in the draft due to a torn achilles on his pro day. Roseman was also dealing on draft night, getting defensive tackle Timmy Jernigan from the Baltimore Ravens to replace Bennie Logan after losing him in free agency. Howie moved back 25 spots from the 74th to 99th pick in the third round to acquire Jernigan. Timmy Jernigan has been crucial on the birds stout defensive line that is one of the best if not the best d-line in football. Roseman’s free agency moves were very team-friendly “now” deals as well. The highlight of the signings was on day one of NFL free agency, inking wide-receiver Alshon Jeffery to a one-year $9.5 million contract with a lot of incentive-based money in the deal. The birds also signed veteran wide-receiver Torrey Smith to a three-year deal but with really just one year guaranteed on a $4 million base salary. The team signed veteran cornerback Patrick Robinson to a one-year $1 million deal to add depth in their secondary. Roseman also signed two veteran players from the New England Patriots. They added defensive-end Chris Long on a two-year deal worth $4.5 million but with a team option after year-one, and they signed LeGarrette Blount to be their starting down-hill running back on another one-year deal worth just $1.25 million.
Roseman made a big splash on Tuesday as well. The team bolstered their backfield trading one of the their fourth-round picks for Miami Dolphins running back Jay Ajayi who was a Pro bowl selection last year. Overall, in the last year Howie Roseman has done a great job with making moves for both the future and the present of this team in mind. The league-leading 7-1 Eagles look to continue their dominance on Sunday in Philadelphia vs the Broncos before heading into their bye week.