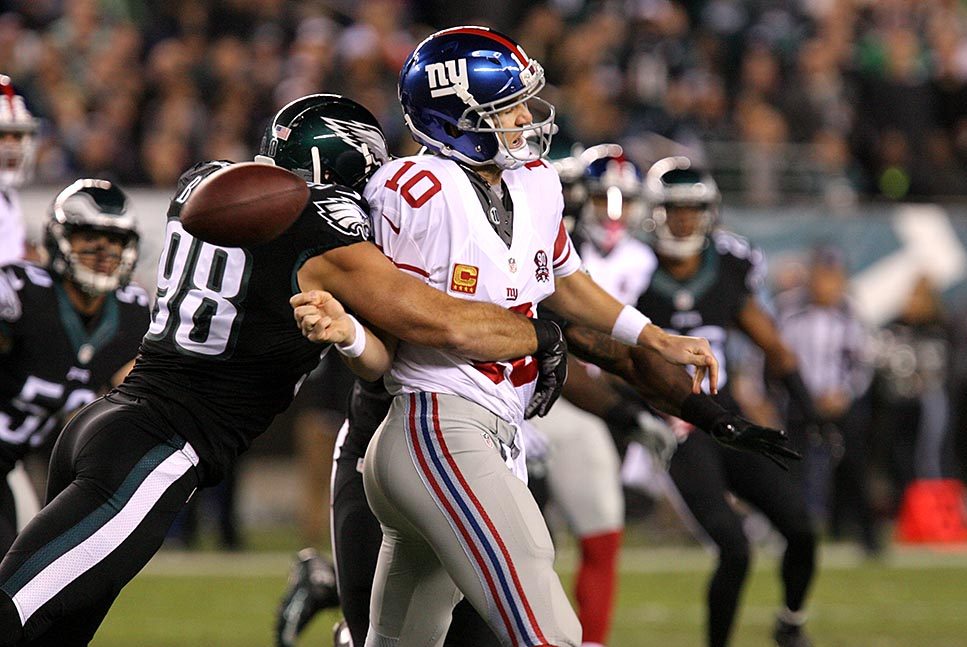 Pass rush, underneath coverage are keys against the Giants

It goes without saying that the game against the New York Giants is of special meaning for the Philadelphia Eagles. A win against the Giants is a lot more than another W in the win column. It’s improving the divisional record, while hurting the opposition, it’s beating a bitter rival and the bragging rights that come with it. But this year, it’s also a matter of survival.

If they want to stay in the hunt for NFC East’s title, the Eagles can’t afford a loss to the Giants. It will bring them to 4-4 overall and 0-3 inside the division and assuming the Dallas Cowboys win in Cleveland against the Browns (which is highly probable), the Birds will be three games from the top of the division with eight games left to play.

Philadelphia has lost just once in MetLife Stadium (in 2012), but I don’t find this very encouraging. The Eagles have dropped three straight away from home, while the Giants have won two of their three games at home.

The Eagles’ offense has struggled recently and all of us want to see them perform better in New York than they did in Dallas a week ago, but the road to victory goes through defense. The offense has consistenty scored more than 21 points this season, failing to reach this mark just once. The team has won every time they put more than 23 points on the board. We all knew the offense would be a work in progress in 2016, but they have managed to post solid numbers so far.

The defense, on the other hand, was supposed to be the strength of the Eagles. They have had their ups and downs, but overall they have been good and against the Giants they need to step up and be dominant.

The Giants’ running game has been no threat so far.  This has forced them to pass the ball quite a lot — they average 38 to 39 passes a game, which is pretty high, especially for a team with a winning record. While Eli Manning is a guy who can push the ball downfield, he operates behind a not-fast, not-agile offensive line and he is not very mobile. That’s why the Giants’ passing play is based on quick passes. This approach minimizes or even negates the opposition’s pass rush and brings the ball to the hands of their receivers between two and three seconds after the snap. That way, the wide receivers don’t have to worry much about types of coverage — they mainly focus on winning inside so they can have a clear path to the incoming pass, catch it and then try to gain yards after the catch.

In most games, Manning mainly  throws the ball short left or short right. He rarely goes to the middle. I watched again 4 of his games and less than 26% of his passes went over the middle. That’s probably because dig and crossing routes take a while to develop and when throwing a slant, he likes to pass the ball as soon as the receiver has left the defender half a step behind.

To be fair, Manning does not do that blindly. He simply takes what the defense gives as soon as it gives it, because he knows that if he waits for a better opportunity to arise, he might not be able to make that pass, either because he would be on the turf or because the pressure might not allow him to throw a good ball. This strategy has not been very fruitful in terms of moving the chains and scoring, but has kept Manning clean. He has been sacked 10 times in seven games.

Which brings us to why the Eagles need to do a very good job with underneath coverage and at rushing the Giants’ quarterback. They need to stay close to Odell Beckham Jr, Sterling Shepard and Victor Cruz and not give them big cushions. At the same time, they front seven must get to Manning. They need to make him uncomfortable in the pocket, force him to move, disrupt the timing of an offense that is tuned to operate with quick passes.

If  the underneath coverage is weak, a good pass rush won’t be enough for Philly. The Giants will find the way to gain consistently 2-5 yards and even break some long ones by avoiding some tackles. The same can be said if the coverage holds and the pass rush does not make it home. Manning will have time to scan the field again and his wide receivers are fast guys who can create separation at any point of  a play, even by abandoning a route and improvising. It will take a strong, synchronized effort from Jim Schwartz’s unit to halt the Giants and give the offense more time with the ball.