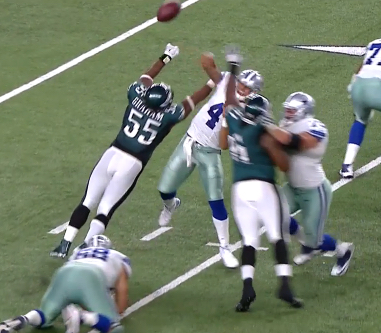 On Sunday Eagles defensive end Brandon Graham had arguably his best game of what is turning out to be an All-Pro season. What made his game even more impressive is the fact that it came against arguably the best offensive line in the league. Here we’ll breakdown some of the plays that Graham made on Sunday.

Here the D-line closes any gaps Cowboys running back Ezekiel Elliot may have, but one of Elliot’s best talents is cutting back and finding a hole. Brandon Graham’s pursuit allows him to clean up the play and limit Zeke to a gain of a yard.

Above, with a four man pressure, Graham is able to spin inside of Cowboys right tackle Doug Free, avoiding Elliot who is helping in pass protection and pressure QB Dak Prescott into getting rid of the ball before he is ready. What makes this play so impressive is that Dallas left six in protection against the Eagles pass rush, but it did not help at all against Graham who quickly beat Free on the play.

Here, the Cowboys run a play that has been a staple with Prescott. A play-action naked bootleg with Witten running underneath. Graham recognizes that Prescott has the ball and chases him down. Credit to Jordan Hicks as well for not losing Witten in coverage and allowing Graham to chase Prescott down to force either one of two outcomes, a sack or incompletion. The latter was the ultimate outcome.

On this play Graham notices something pre-snap and moves in closer towards Fletcher Cox. As soon as the ball is snapped Graham immediately shoots through the B gap and drops Alfred Morris for a loss after the sliding offensive line can’t open any lanes for their runner. While the defensive line allowed Graham to chase down Morris, his recognition was incredible and he may have noticed something on tape. Despite tight end Jason Witten moving across the formation Graham shot right towards the opposite side of the field without hesitation.

Jim Schwartz brings a blitz here with Jordan Hicks and Malcolm Jenkins. Free takes on Hicks, which gives Graham and Jenkins a free run on Prescott off the edge. This coupled with a mishandled snap forces Dak to get rid of the ball on a route that seemed to have caused confusion between Dez Bryant and Prescott.

Graham put a nice spin move on Doug Free that forces Dak outside of the pocket to his right, away from where all but one of his receivers are. With nowhere to go Graham continues his pursuit along with Fletcher Cox which almost leads to an interception had Terrance Williams not bailed Prescott out. The Cowboys settle for a field goal as a result.

Here Graham beats Free inside which forces the right guard, Zack Martin, to pick him up, freeing Fletcher Cox to pressure Prescott outside of the pocket and force an incompletion to Williams. As was the trend all night, Graham could not be stopped when rushing through the B gap. Another positive to Graham rushing that gap, he didn’t lose contain in the scheme that allowed Dak to roll out and beat the Eagles with his legs.

On this play Prescott wants to go to his left after motioning Elliot out that way but there is nothing there. When he comes back to his right Graham has beaten Free forcing Prescott to checkdown while backpedaling because of the pressure.

On this last play Graham displays a great use of his hands and destroys Free off of the edge and gets to Prescott just a second shy of forcing a fumble. Free barely gets even touches Graham as he applies pressure to help ultimately force overtime.

Graham’s game was awesome live, but going back and watching him wreak havoc on Doug Free shows just how elite he was. According to Pro Football Focus he had the most QB pressures of any edge defender this season. If you want to have a showing like that, it never hurts to do it against arguably the best line in the league. Here’s to you Brandon Graham, making us forget about Earl Thomas week after week.