Dallas Cowboys have the worst fans in sports

The Dallas Cowboy fanbase is the absolute scum of the earth. I know there are some cowboy fans out there (I think) that are somewhat reasonable and know what exactly common sense is. But 99% of them are in fact the worst people on this planet. So, with that being said, here’s why they’re the worst fanbase in American history. I’m going to try my best and not swear in this article.

When you’re a Dallas Cowboy fans, you gotta have this really low life personality. Basically what I’m saying is they think they’re gods gift to the earth and you’re a nobody. They believe since they have five rings that they’re a higher up person in the world and the Eagle fanbase doesn’t mean anything because they have 0 rings. Doesn’t matter that the Cowboys have been a .500 ball club over the past 20 years and the Eagles have had more success than them in the present. The Cowboys have 5 rings so that means they’re better than you, according to them of course.

I honestly believe Charles Tapper is better than Fletcher Cox

Trash talk:
All Dallas Cowboy fans love to talk trash. It’s a rivalry what do you expect? But with people who have low level IQ’s and think they’re gods gift to the earth, it’s a lot more irritating. The Eagles could trade for A.J. Green and give up a 7th round pick and the Cowboys would still trash on A.J. Green because he’s not better than Dez, or he’s a bust he’s not actually that good. That’s what they do. I saw some tweet from a cowboy fan way back in April during the draft, and they actually thought Charles Tapper, a 4th round pick in the 2016 draft, was going to be a better player than Fletcher Cox. I mean it’s ridiculous. Then they got to hype up they’re own players like Dak, Zeke, the and the O-line. I’m not going to discredit what the offensive has done this season, but calling Dak Prescott the greatest QB of all time and Wentz an overrated bum has got to be the dumbest thing I’ve ever heard in my life.They’re all talk during the offseason and heading up into pre game, but when they lose, it gets even better.

Since the Cowboys are the greatest team to ever be assembled, according to Cowboy fans, it’s only right to make up a bunch of excuses for when they lose. If they so happen to lose this week, what’s the excuse going to be this week? “Zeke and the O-line are rusty from the bye week?” But I thought this was the greatest offensive line in league history and Ezekiel Elliot was the greatest running back to ever set foot on this planet? They’re not suppose to be rusty heading out of the bye week if they’re the greatest. “If Romo was in, we could of easily won.” I’m sorry, I was told that Dak Prescott was the greatest quarterback of all time and you no longer needed Tony Romo. “The refs were so one sided, we got completely screwed.” Sure you did. And once they run out of excuses, they go to their favorite saying of all time. “We’ll it doesn’t matter that we lost, we still have 5 rings and you guys have 0 so really who cares.” Alright 15 year old Cowboy fan settle down, I know your mad but you don’t have to bring up championships you never saw. They also love to discredit Eagle wins for some reason as well. An example of this would be “oh, calm down Eagle fans, it’s just the Vikings. Sam Bradford is an overrated bum and they’re an overrated team in general so it’s not a real win.” Or “oh calm down Eagle fans, it’s just the steelers, Big Ben is on the decline plus they didn’t have Le’veon Bell and he would of toasted your defense.” I loved the “it’s just the Browns” excuse as well even though 99% of them thought we were going to lose to the Browns. 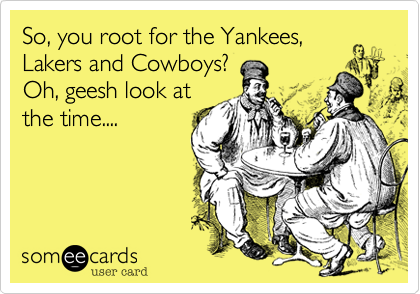 Cowboy fans also tend to be a bigger bandwagon fanbase in the world as well. It’s always funny to read cowboy fans bio on Twitter, Facebook, or Instagram and it says “cowboy, yankees, lakers fan”. Like I mentioned before, when you’re a cowboy you gotta feel like your gods gift to the earth, so what do you do? You cheer for other franchises in other sports that have a lot of success as well. That’s because they’re Cowboy fans, they can’t cheer for the Mavs or the Rangers because they don’t have nearly as many rings as the Lakers or Yankees. They might not be big fans of the Yankees and Lakers at the moment because they aren’t doing too hot at the moment. But believe me when the Yankees and Lakers start playing, which they will soon, they’ll be back on the bandwagon cheering for these teams.

The Dallas Cowboys have the worst fans on this planet. They’re low life scumbags that have nothing else going in their life but downing the Eagles. I’m sure some cowboy fans are reading this and they think I’m completely wrong and that I’m just some typical philly fan that knows nothing about sports. Go ahead cowboy fans, explain to me why you guys aren’t the scummiest, worst low life fanbase in America. Here’s my Twitter handle, @Niick_Holas, let’s talk.