If you caught the first episode of the 4th and Jawn Podcast, you heard Erock, Gayle and the crew go over their personal NFC Power Rankings. Opinion’s were varied, but there wasn’t a single take that I agree’d 100% with. As you can imagine, that is the motivation behind this article. Let’s take a look at which team has the most going for them heading into September.

The worst team in the division, is the Cowboys. The experts may be heavily favoring the ‘Boys to be the ones to give the Redskin’s a run for their money, but the team is really flawed. Tony Romo, when healthy, is a top 10 quarterback. The hard part is keeping him healthy. Dallas may have the most weapons on the offensive side of the ball in the division, from Dez Bryant to Ezekiel Elliott to their whole line, and make no mistake, they could be potent. 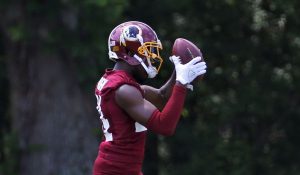 Josh Norman make’s a catch during a drill in Training Camp.

The questions really come when you get to the other side of the ball. Who in the pass rush scare’s you? DeMarcus Lawrence, Randy Gregory and Rolando McClain all have hefty suspensions for PED’s. Sean Lee is just as fragile as Tony Romo. The secondary is decent, but is nothing to get excited about. So again, it all boils down to Tony Romo. If he’s healthy, they are certainly the best offense in the division. But if he misses any extended time, the offense will become stagnant and the defense will be forced to be on the field a ton, and that is really bad news for Dallas.

The Redskins come in at 3rd in my divisional ranking. However, it is pretty much a proverbial tie between them and the Eagles. Both teams have aspects that may be better than the other, but also have some deficiencies where the other excels. The Redskins, no doubt, have more firepower at wide receiver and arguably a better quarterback situation (this year). I’d give the edge to the Eagles in the running backs and offensive line (that’s pretty close).

The defense for the Eagles has more talent and more depth along the line. At linebacker, it’s a tie. Mychal Kendricks, Jordan Hicks and Nigel Bradham are all quality starters for the Eagles, but the ‘Skins have Pro Bowler Ryan Kerrigan to go along with Preston Smith and Will Compton (“meh”). On the back end, the Eagles have the better situation at safety with Rodney McLeod Jr and Malcolm Jenkins, but Washington has newcomer Josh Norman, rookie Kendall Fuller and others.

Lastly, in what may surprise some, I have the Giants as the best team within the division. Here’s why: Eli Manning beat’s out Romo for best QB in the division (because he is basically always available), Odell Beckham Jr is right there in terms of wide receiver rankings in the NFL, and they have a quality, and underrated, stable of backs. On the line, Ereck Flowers should be better in his second year to go along with third year pro Weston Richburg and Justin Pugh. While their offense may not be quite as dangerous as the ‘Boys, its not too far behind.

The defense received a ton of new talent via free agency and the draft. Defensive end Olivier Vernon was brought in from Miami to pair with former Jets stalwart Damon Harrison. The cash flow didn’t end there when big money free agent corner Janoris Jenkins came in from St. Louis. Those three guys join quality starters Jason Pierre-Paul, Dominique Rodgers-Cromartie and Landon Collins. Barring some “Dream Team” type of collapse, the defense should be much improved to go along with a stable, and sometimes dynamic, offensive attack.

The separation from top to bottom really is probably the closest out of any division in the entire league. You could literally make a valid argument for all four teams and why they have a chance to make it to the post-season. Does this article have any real merit? Not really, I could look like a complete idiot by week 4. But I just thought that the crew’s takes were interesting and thought that I would offer mine.