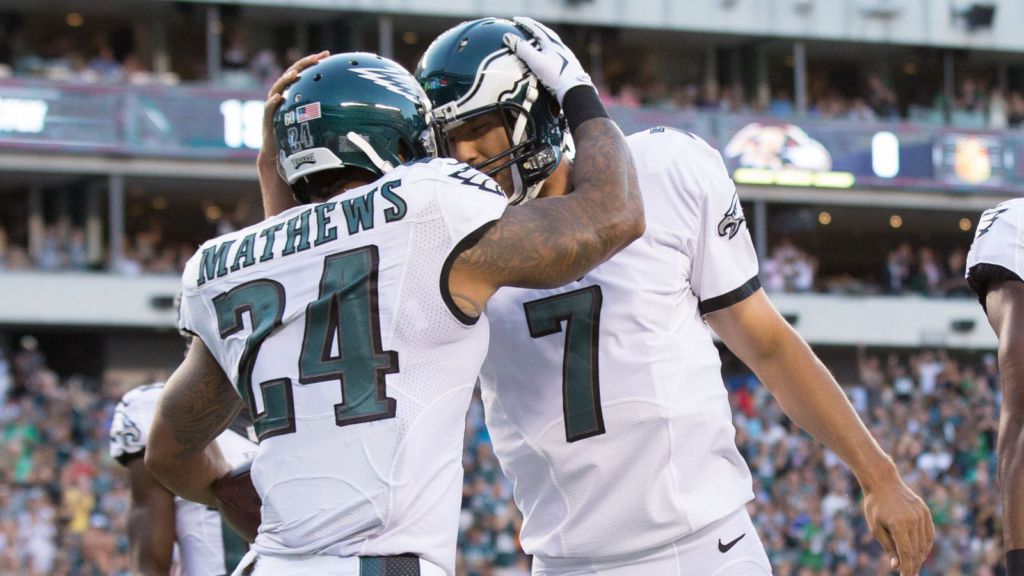 Every year around the football world, certain players start to blossom. As the October leaves change color and begin to die, a guy under the radar, or a former high draft pick, could be making a name for himself. It’s one of the things that is so captivating at the start of the regular season, the unknowns that will unfold right in front of your eyes.

Many believe this will be a building year for the Eagles, and notice I didn’t say “re-building.” Contending for a division title or even a wild card spot will be quite the challenge, especially when you look at their schedule over weeks 7-12, where they’ll face these  teams, in order: Vikings, Cowboys, Giants, Falcons, Seahawks, Packers, Bengals. Unless they put together an extraordinary beginning and end to their season, I just don’t see this team as a playoff team. That’s not to say however that the 2016 season won’t be a launching pad for a couple of guys. On offense, here is a breakout player for each level.

On the offensive line, my breakout candidate is Brandon Brooks. If you’ve ready my earlier content, I predicted Brooks to be making his first trip to the Pro Bowl in January, 2017. Why, you might ask? There are a couple reasons, and the first being that Brooks upgraded his surrounding cast tremendously when he signed on the dotted line back in March. Jason Kelce and Jason Peters are former Pro Bowlers, Lane Johnson will take that step this year, and Allen Barbre is solid at left guard. 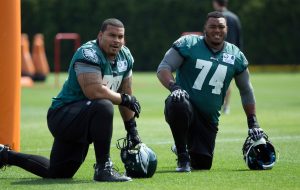 The second reason I expect him to make the leap is due to the new run heavy philosophy that new coach Doug Pederson runs. If  the Eagles can once again become a dominant running team, people will notice the play along the line. The third and final reason that I fully expect Brooks to break out, he’s just now entering his prime years, and thankfully, they will all be spent in Philly. Brooks is described as a mauler of a guard, standing at 6’5″ and weighing in around 330 pounds. While he’s bigger than most guards, he absolutely dominates the point of attack on running downs while more than holding his own in passing situations. The right side of the Eagles offensive line will be in the Pro Bowl, book it.

For the next group, let’s combine both the tight ends and wide receivers. You may know this guy as  “the guy who is supposed to break out every year but is just average.” While that could be a couple guys in this group, ahem Josh Huff, if you guessed tight end Zach Ertz, you are correct. Ertz came into the league under Kelly and has been pretty much your average tight end. However, armed with a hefty extension and a more reliable system, Ertz should vault into the top 10 among his peers at his position.

Last year in Kansas City, tight end Travis Kelce dominated defenses, hauling in 72 receptions for just under 900 yards (875) and 5 touchdowns. That was enough to earn him his first Pro Bowl nod. Ertz meanwhile had 75 receptions, 853 yards and just 2 touchdowns. If Ertz can put up those numbers in a year where he split a lot of time due to the no huddle offense and Brent Celek, imagine what he can do in a system that is friendly to his position. Can those numbers go up? Absolutely. I suspect that Pederson will run quite a bit of two tight end sets and use play action off of that formation, resulting in more opportunities for both tight ends. Here is what Ertz had to say about the two tight end sets.

“Yeah I think the way that I’ve improved my run blocking in particular, it presents a lot of opportunities to have a lot of mismatches in that regard. I think Brent and I kind of pride ourselves in being the strength of this football team, and I think that’s the way we go out and approach practice every day.”

Combine more playing time and a system better suited for him, Ertz should have a split of around 80/950/6 (receptions/yards/touchdowns). 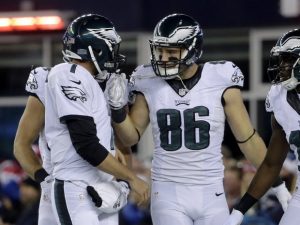 Tight end Zach Ertz (86) celebrates with quarterback Sam Bradford after the two connected for a touchdown against the New England Patriots in 2015.

At running back, you could make an argument that Wendell Smallwood is the future at the position, or the future of the position could still be playing college ball somewhere. I disagree. While many are high on Smallwood, he may not be too involved in his first year as a pro. Ryan Mathews, in limited duty last year, was able to put up fabulous numbers. While it does seem like he could get hurt playing paper football, I have a feeling the slower pace on offense will be a big benefit. Last year, over 106 carries, Mathews averaged an astounding 5.1 yards per carry.

What some don’t realize, he only averaged 8.1 carries per game (played 13 games). While Darren Sproles will be in on obvious passing situations, Mathews should tote the ball on average between 15-20 times per game. While it would be hard to average 5.1 yards per carry, somewhere in the 4.2 to 4.5 range is reachable. Take this scenario, say Mathews averages 4.3 ypc and has 17 carries per game but misses 2 games. That puts him over over 1,000 yards at 1,023.4 yards. Those are pretty respectable numbers even with some time missed. For some reason, I have a hunch about Mathews and the year he is going to have this year.

At Quarterback, who will break out? I have no earthly idea myself. Sam Bradford could very well take a big step up as the new system fits his strengths in that it allows him to read defenses and make changes so that the offense is in the best play possible. The Eagles don’t really play too many teams that have lock down coverage. The Vikings, Seahawks and Bengals should be the toughest secondaries they face. On the flip side, they should be able to put up big numbers against the likes of the Browns,  Steelers, Falcons,  Cowboys (X2) and Bears.

Also, expect Bradford to ride the pine for the last month plus if they come out of week 12 under .500 and barely hanging onto playoff hopes. Will Bradford go for 4,000 yards and 25 touchdowns? Not unless he plays a full season, and even  then he may not, and Carson Wentz can’t really break out if he only plays 4 games. This year at the quarterback position really is a lame duck campaign.

So to recap, expect Brooks to solidify the interior of the line, Ertz to make a solid tandem with fourth year receiver Jordan Matthews, and Ryan Mathews to lead the backfield back into a formidable force. Let me know what you think via Twitter where you can find me @4thJawnHabecker.