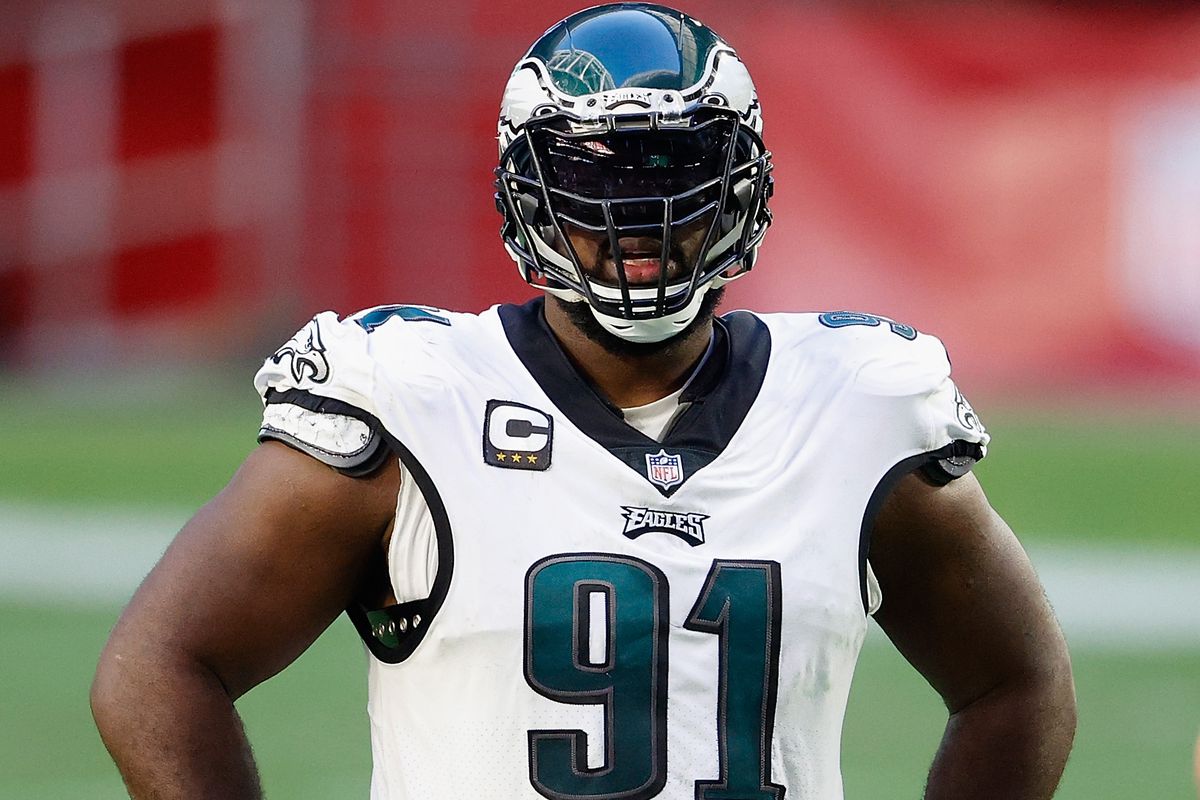 Fletcher Cox has been released, where do the Eagles go from here?

This day has been a long time coming, when you look at the contract, and the decrease in production, I can’t say that Philadelphia and Fletcher Cox parting ways was a complete surprise. Cox getting released was a bit surprising, but the writing was on the wall for a change at the defensive tackle position. All respect due to Fletch, he is one of the best defensive players to every don the Kelly green. But as we’re constantly reminded, football is a business at the end of the day and no player is exempt from being cut or traded. Even with the news that there’s a good chance that Fletch is back on a one year deal, Philly needs to think about their future at defensive tackle.

Whether Fletch returns or not, Philadelphia is in pretty good shape as far as their two deep goes at defensive tackle. Javon “Grave Digger” Hargrave had an outstanding 2021 season where he was able to make up for a lackluster 2020 campaign by racking up 8 sacks and the 3rd highest pass rush win rate out of all interior defensive linemen. Hargrave still has work to do against the run however, but he has proven to be a reliable three technique and someone worth the money he’s been paid thus far. Rookie Milton Williams was a bit of a surprise third round pick, but he was able to show flashes of being a good long term piece for Philadelphia. He was a part time player behind Cox and Hargrave, and showed well as a pass rusher but also had his struggles against the running game. He will continue to develop and grow as an all-around player and will only be 23 years old when the season starts. Behind Hargrave and Williams there isn’t much left, as Marlon Tuipulotu, Renell Wren, and Marvin Wilson are all unknowns that haven’t shown they are ready to be full time or even part time contributors in the NFL.

Free agency doesn’t hold a ton of options for Philadelphia, especially if Cox comes back for one more year. Most of the options are older players that are either looking for a bounce back deal or their last deal before they ride off into retirement.

Akiem Hicks– An older option at defensive tackle that would probably be looking for a one or two year deal and would be a good fall back option if Philly can’t find a way to bring Fletcher Cox back. Hicks will be 33 in November and his last truly productive season was in 2018. But the Eagles could do worse for a mentor for Milton Williams, and signing Hicks most likely wouldn’t break the bank.

Sheldon Richardson– Another defensive tackle option that’s on the latter end of his career (turns 32 in November), and is probably only looking for a 1 year deal. Richardson is someone who could take up the snaps vacated by Cox (again if he doesn’t return), and offers some positional versatility as he’s played defensive end, oversized outside linebacker, and defensive tackle in his career. He’s racked up 15.5 sacks over the past 5 seasons, and has scored relatively well against the run and pass according to PFF.

Eddie Goldman– Goldman is one of the younger options (28 years old) on the market and was recently released by the Chicago Bears. Goldman is more of a 0-technique than he is a one gap attacker but he would definitely be a significant upgrade versus the run. Goldman sat out 2020 due to Covid, and had his worst season as a pro in 2021. He is probably looking for a multiple year deal, but he’s two years removed from real productivity and may need to settle for a one year prove it deal before trying his luck again as a free agent in 2023.

The NFL draft is probably the best place for Philly to find players and this a good year to be in the hunt for a defensive tackle, because this class is deep with talent. The prospects also performed well athletically (I’ve listed their 40 times to highlight that) at the NFL Combine and each has unique attributes they bring to the table.

I don’t see a scenario where Philly doesn’t use a Day 1 pick on a DT being that it is a clear need and also a great opportunity to focus on an important position for the future.

Jordan Davis is the top defensive tackle on the board for me and a player that the Eagles should be all in on if he’s still available. He had 2 gap responsibilities at Georgia and isn’t necessarily a seamless fit for Philly but he has abilities at his size that are HIGHLY coveted. He shows skills to stop the run at an extremely high level and is arguably the top “space eater” in the draft. Davis would pair really well with Milton Williams long term in the middle of Philly’s defense and if he can keep his weight under control he has Pro Bowl (if not higher) potential.

While Davis is the popular name being attached to the Eagles, Devonte Wyatt is no slouch and is REALLY close to being as good as his counterpart at UGA. Wyatt and Davis combined to be monsters in the middle of the UGA defensive line and made life hell for opposing offenses. Wyatt is probably a bit more your prototypical 3 technique size wise and offers a get off at the line of scrimmage few other defensive tackles offer. He uses his hands well and can stop the run and push the pocket. Definitely has Pro Bowl potential, and if he develops his pass rush tool box maybe even maxes out as an All-Pro.

If somehow Philly manages to leave the first round of the NFL Draft with out a legitimate tackle prospect, there are still some good options on the second day.

Travis Jones has moved himself up draft boards after a great week of practice at the Senior Bowl, and a 2021 season that saw him record 7.5 TFLs and 4.5 sacks. He isn’t going to be a big sack guy in the NFL, but he has shown the ability to win one-on-one matchups with power rush moves. He will however be a really solid run stopper/space eater who can win as a one technique or as a 0 (nose). He missed the 2020 season due to Connecticut canceling their season, but leaves college with three pretty solid years of overall production (19 total TFLs and 8.5 total sacks). He has the makings of a 10 year pro, especially with his ability to stop the run.

Perrion Winfrey is another player that made himself some money at the Senior Bowl, showing off his ability to power rush and also good hand placement and quickness to win his matchups. Winfrey only played for two seasons at Oklahoma, and had a great 2021 season where he collected 11 TLFs and 5.5 sacks. When you watch his film, he plays with a mean streak and aggression that you want from an interior lineman, and he looks to dominate his opponent with every rep. He’s a bit stiff in his hips and bend, and is also one of the smaller iDL (weight wise) prospects available at this point. Winfrey to me is a solid prospect that could be a key cog in the rotation for Philly for a long time.

While Travis Jones and Perrion Winfrey are moving their way up draft boards, it would appear DeMarvin Leal is on a downward slide. Despite playing 5 technique at Texas A&M, he probably isn’t a DE in the NFL, and is a bit undersized to play defensive tackle. His ‘tweener status was already hurting his draft stock, and then he ran a 5.0 40 yard dash weighing significantly less than some of his other iDL counterparts. But don’t let the size or athletic number fool you, Leal is a football player and someone I believe will have a long career in the NFL if drafted into the right system. In 2021 he managed to rack up 12.5 TFLs, 8.5 sacks and was a constant disruption for opposing offenses. I believe that he would be a solid Day 2 pick for Philly and would eventually turn into a really good 3 technique down the road.

A few names to keep in mind for Day 3 are Haskell Garrett from Ohio State, Kalia Davis from UCF, and John Ridgeway from Arkansas. Garrett and Davis are more traditional 3 technique type players that offer some value as rotational linemen, Ridgeway is more of a 0 technique run stopper that may never evolve beyond a two down player. I doubt that Philly waits until Day 3 to address the position, so all three of these players are more likely to be potentially selected to add depth to an important position. But all three players have tools that if properly coached up could lead to production at the NFL level.

Fletcher Cox’s release ultimately highlighted a positional need that already existed, but has now been exacerbated by possibly losing the best player they had at the position. Whether Cox resigns to a one year deal or not, now is the time to address defensive tackle, most likely via a high draft pick. Thankfully there are a number of talented defensive tackle prospects available Day 1 and 2 of the NFL Draft, and even some decent depth options on Day 3. It’s now on Eagles GM Howie Roseman and his team to put together a plan to make sure the Eagles remain as competitive as possible along the defensive trenches.