As another Jadeveon Clowney to Philadelphia rumor dropped, let’s actually talk about the move.

Per ESPN’s John Clayton, Clowney is open to coming to a win now team and the Eagles are one of those teams he’s interested in coming to. He also said that he’s looking at a one year deal around the $9-10 million mark. Which, let’s be honest, for Clowney is not too bad at all.

Getting Clowney for one year on an already playoff ready team is a big addition. Having another big presence on the defensive line is massive as the Eagles love to rotate their defensive linemen. But, football is a business so let’s take a look at that part of this move first.

Below is a look at the Eagles current and future cap situations for the next few seasons. 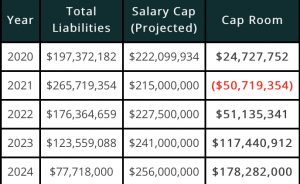 The Eagles already have Brandon Graham, Derek Barnett, Josh Sweat, Genard Avery, Shareef Miller, Joe Ostman and Daeshon Hall at the position. Plus, it’s expected that Malik Jackson will take some reps at defensive end as well. There’s no doubt adding Clowney to that rotation makes it much better, however, it’s not really a big pressing issue.

For a team that likes to develop and promote from within, you’d definitely think the Eagles would love to see a big jump in production from Barnett and even Sweat. And, Avery is a very intriguing player. Being added via a trade deadline move last season, he’s only gotten bigger and faster since then. He’s going to become a much bigger member on the defense.

To be completely honest, as much as Clowney would benefit the Eagles defense, the move doesn’t make sense for him. I cannot imagine him coming to the Eagles and leaving the next season, unless he really thinks he can be productive and they win the Super Bowl. It’s very unlikely he’d be with the Eagles for more than one season. If he wants to come for just one season, let’s roll!