Free Agent Watch: Why Jets WR Robby Anderson is a good option for the Eagles

The first stepping stone this offseason for the Philadelphia Eagles in terms of adding talent to their roster in free agency. We’re two months away from this, and already, names are being thrown around. One player, in particular, is a very intriguing name and that’s wide receiver, Robby Anderson.

The New York Jets and Anderson will most likely not have a reunion this offseason, he’s going to leave. With that being said, a team in need of Anderson’s talent is the Eagles. He brings both sides and of course game-changing speed when he’s on the field.

This past season, Anderson was able to stretch the field for the Jets, averaging 15 yards a reception. In total, he secured 52 receptions for 779 yards and five touchdowns. The Jets had quarterback trouble all season, Anderson caught fire at the end of the season when Sam Darnold was finally back in the lineup.

When he’s on the field, the speed is most definitely a factor. And, you can say he’s full potential has never been reached.

At the age of 26, Anderson still has a lot to grow. The unfortunate part is he’s going to command around $10 million a season. However, you have to see the side of his potential. In a productive offense with an offensive mind like Doug Pederson, there’s no doubt they’ll find ways to get him involved and he’ll thrive.

Below is a bunch of analytics we’ll breakdown. 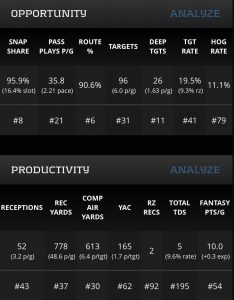 The one key statistic above is the deep targets. He ranked 11th in the league last season, seeing 26 deep targets. In a season where he saw 96 targets, meaning 27% of his targets were deep passes. Like forth noted, Anderson had to deal with losing Darnold for a good chunk of time as well, let alone his own time missed.

With the Eagles likely to lose Nelson Agholor, and possibly Alshon Jeffery, Anderson makes perfect sense. Firstly, adding speed to their offense is critical and we know that. Secondly, Anderson is more versatile than just a deep threat, the statistics above show that. Agholor was being paid $9.5 million last season and Anderson offers much more to the offense than him.

Now, you don’t want to bury your team and give him a massive contract, so if his market takes a big turn, the Eagles might want to avoid it. However, for a deal in the region of four years, $40 million, the Eagles should be all over that.

Going by the scenario that the Eagles let Agholor walk and find a way to cut Jeffery lose, Anderson becomes an immediate starter outside with DeSean Jackson. Jackson will likely be back as he was a big-time contributor in his one game with Carson Wentz. The two showed great chemistry.

Now, we saw Greg Ward and JJ Archega-Whiteside develop and contribute at the end of the season. They’re slot wide receiver candidates for next season. However evening with all of that, the Eagles could still look to add a wide receiver early in this NFL Draft. You can never have too much talent and too much speed, as we’ve seen the Kansas City Chiefs thrive with unlimited weapons.

When speaking about Anderson, don’t go by statistics, they do not tell the whole story. He’s a barn burner and has the ability to take the top off of any defense. However, his ability to play inside and make plays is underestimated as well. His full potential has yet to be unleashed and with the Eagles, it could be.