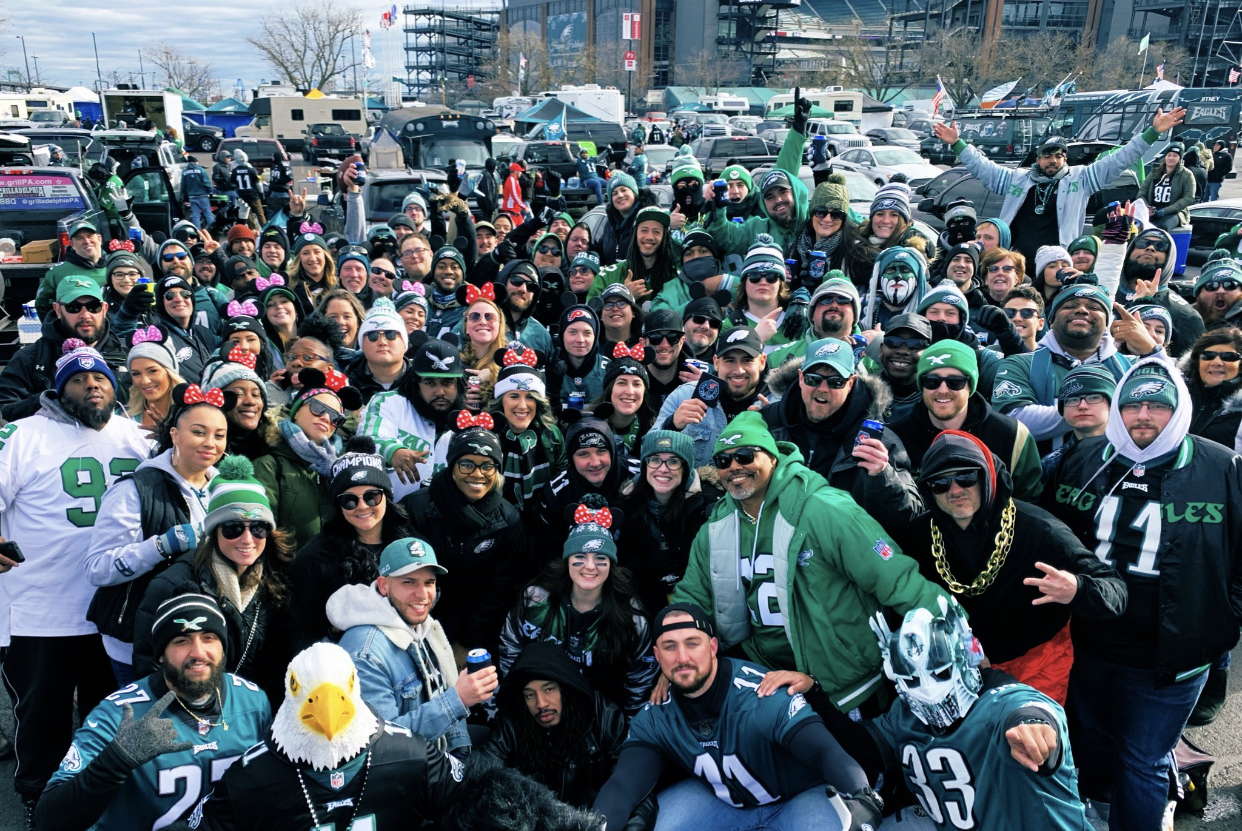 One Heart, One City, One Team

It saddens me to say that the 2019 Philadelphia Eagles season has officially come to a close. The reason I am sad is not for the fact that the season is over, it is because this of special this season was and always will be to me. This was not only my first season with 4th and Jawn, but it is also my first season as a sports journalist period.

Like all of us, I grew up into a family that bleeds green. That means more to me than just rooting on the Eagles. I am adopted and I learned quickly that it meant nothing to my immediate or extended family. As long as I had the last name, wore my midnight green, and was a gentleman, I am family and I am blood. That means a lot to me. That’s my mentality with everyone I meet. No matter how you look, what your job is, or how much money you have, it makes no difference. If you are a genuine person and you show respect to me, I will do the same.

My entire childhood, I was obsessed with sports but football was always special to me. I would draw plays and try to make my own teams from different players around the league based on their stories and who I thought would like each other. For hours I would go on Rivals.com and YouTube and watch hours and hours of games. At family parties, I would walk around showing highlights of Pat White, Sean Taylor, and other college stars to my uncles. They probably did and still do think I am annoying but they absolutely know that I am passionate about it.

I played sports my entire childhood and that lead me to walking on to the track and field team at West Chester University. I had aspirations of being a teacher and leaving my mark with the track team. From 8 am-11 pm I would either be at practice, in a class room, or studying. It ran me down. I kept up with my social life because my friends mean the world to me. While I was in college, 6 of my close friends passed away from cancer, suicide, and drug overdoses which added to more weight to the anchor pulling me under water.

My mental health took a bad turn when I started getting migraines and would blackout from anxiety. I went to the hospital with my parents and just wrote it off as stress. Negative thoughts are always creeping in but I have taught myself to keep them out. I have a lot of family members and friends that lean on me and a lot of them fighting their own battles so I keep pushing for them.

The 2017 Eagles season was special to me. All offseason I told people that we would win the Super Bowl and most of them told me I was crazy. The magical run took a nose dive after Carson went down and my heart sunk. People sometimes ask me, “Why do you like Wentz so much? What makes him so special?” To be honest, what doesn’t make him special.

Carson Wentz was a 5’8″ high school freshman at Century High School in Bismarck, North Dakota. He is now a fourth-year NFL quarterback who is a 6’5″ Super Bowl Champion. But more importantly, he is the best person this sports city has seen and for some reason, he is also the most hated. Since the first day that Carson Wentz has set foot in Philadelphia, was has there been? Hope. Not only hope, but we have also  been winning.

This guy is handing out free food to the needy and homeless every day, while  building schools and fresh water sources in third world countries. He is breaking NFL records with players most NFL analysts don’t even know and yet people still hate on him every day. But it is ok, he is built to last. If bashing him and just focusing on just him is your obsession or what makes you smile, then, by all means, continue to live your ignorant and miserable life but keep you crappy opinions and takes to yourself.

As we all know, we secured the number one seed after “soft” Carson Wentz stayed in the game against the Rams on a torn ACL, while facing Aaron Donald and Ndamukong Suh and he throws the go-ahead TD on one leg. The rest is history and the Eagles go on to win the Super Bowl. This was a special month in my life. One of my close friends passed away before the game and that game wasn’t just for us, it was for everyone we lost along the way. The same held true with the actual team who lost their teammates along the way. That is why I get so annoyed when New England fans say “1 ring.” Congratulations, your video crew, “tuck rule” officials, football deflating team has won more rings than us but I guarantee you that our 1 ring will always mean more to us than any of yours.

Riding the Super Bowl high, I decided to give up teaching and pursue a dream. I bet on myself and did odd jobs in construction, driver helper for UPS, and cut lawns to make ends meet. My family and I were homeless after a real estate deal turned South. I slept on a mattress on my uncles floor and would stare at the ceiling every night and tell myself that this is the lowest point I will ever be at. This is not the end, but the beginning. On the ceiling, I pictured all of the things I would experience and all of the things I would accomplish and that made me hungry.

I began writing short draft profiles and takes on anything I had thoughts on. People agreed, people disagreed– that’s life. One day a writing group reached out to me and I jumped at the opportunity. Insanely enough, it took off immediately. I won an award for an article after my peers voted on it. It just made me more hungry. I can’t thank that group enough for giving me a shot but it just wasn’t a fit. Destiny came in handy to fix that.

10/10 experience hanging out with @KyleBrandt and @willcolon66 along with @eagles fans @TheMightyEROCK and @EagleSessions from the @4thandJawn tailgate. Kyle deserves all of th accolades he receives in the future and will always be Philly royalty! pic.twitter.com/X23U9Ci1fx

I won a contest to meet Kyle in NY and it just felt right ya know? While there, I was hoping to run into some Eagles fan and of course I get to me Eagles fan legends ERock, Gayle, and Evan. We chatted it up, enjoyed the day, and all parted ways. Months later Gayle and I got into contact after he realized I was a writer now. He took a shot and allowed me to jump on board, which was a dream come true people.

Within a month. I’m sitting behind a microphone talking to an audience of thousands of people giving them my opinions on the NFL Draft. A week later, I am walking through the game day tunnel with my dad at the Eagles draft party.  By the end of the month, I raised over $1000 for the Eagles Autism Challenge and I am walking a 5k next to Brent Celek and getting pictures with Corey Clement and Lane Johnson. A few days later, Carson Wentz is standing in the dugout of Citizens Bank Park and signing my jersey. Those are the things I dreamed of  while I laid on that mattress that were all happening and I still knew so much more was ahead.

Listen, we all went into the 2019 season excited and ready for another special season. Did it go our way? Hell no. But as Eagles fans, when does it? But hear me out, this was a special season and don’t let anyone tell you otherwise. We saw a team face adversity every single week and they pushed through all of it and willed themselves to a division title . The Eagles fought until the last snap, with nearly 40% of their week one roster on the shelf. It was frustrating, it was chaotic, but so is life. That is why we love and relate to this team so much. They aren’t fake. Quite honestly, they are the furthest thing from that. We can hope and pray for the best, but sometimes life just leaves you flat on your butt and you can either get up or let it keep you down. We saw a small group of veterans put the team on the back and inspire these young guys along the way.

Anyone who has been following this team knows that they are going to come back hungrier and healthier in 2020. Carson Wentz is breaking records without a healthy group of receivers or line. It’s time for you to be all in or all out on Carson because enough is enough. The only reason we are optimistic going into every year is because Wentz is our quarterback.  He gives us a chance to win every game. If you don’t believe that, then winning 4 straight must-win NFC East games without 8 offensive starters or rotational guys means nothing to you.

Now to focus on the positive. A huge shout out to the team in Gayle, E, Evan, Trox, JT, Prime, Kelly, Ryan, Brenden, Brendan, Mark, Jimmy, Zander, and literally everyone who makes 4th and Jawn special. It is unreal that anyone could hate on this group. They invited me in with open arms and have been genuine from the start. No matter where I go in the future, I will always remember the memories and the people that have come into my life because of this group. I cannot wait to get back to work with this group and getting you all ready for the 2020 NFL Draft. Thank you everyone for following along with my content, it truly means the world and I’ll always do my best to make sure you know you are appreciated. See you all soon people and be on the lookout for draft content soon!