The Eagles win, the Philadelphia Eagles win. They went to Washington DC and although they made it harder than it had to be, they defeated the Redskins 37-27 to move to 7-7 on the season.

Quarterback Carson Wentz did it again. He took the team down the field as scored the game’s winning touchdown with under 30 seconds left in the game. On his touchdown, he threw a beautiful pass to the back of the end zone to newcomer and journeyman Greg Ward Jr.

On the day Wentz threw for 266 yards and three touchdowns. Connecting with Ward Jr, tight end Zach Ertz on a three yard touchdown and running back Miles Sanders on a beautiful pass off of a scramble drill.

Here’s the statistics from the offense. 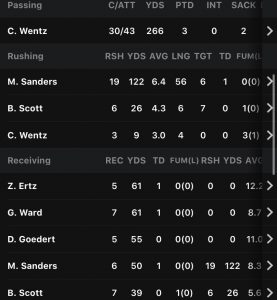 It’s important to note how big of a game rookie running back Sanders had. He totaled 172 yards on the day, 122 of that on the ground. Today, he also became the Eagles all time rookie leading rusher and broke the rookie record for total yards on the season surpassing wide receiver DeSean Jackson who had 1,011 his rookie season.

Although today’s game wasn’t very pretty, the Eagles got the job done. There’s a feeling

around this team where it seems as if they will always come back. They never give up and that’s a special trait to have.

Defensively, it wasn’t the Eagles best outing, giving up 362 yards. They held up at the end of the game holding them to two field goals which proved to be important.

The Eagles ended the game with a 47 yard fumble recovery touchdown, the perfect icing on the cake.

It’s a big win for the Eagles because they’ve proven now they can take a few hits and keep going. When counted out, the Eagles love to prove everyone wrong.

Now, the Eagles are on a two game winning streak and sit at 7-7 in the division. There’s a possibility by the end of today the Eagles sit atop the NFC East. Regardless, next weeks battle versus the Dallas Cowboys will likely determine who wins the division.