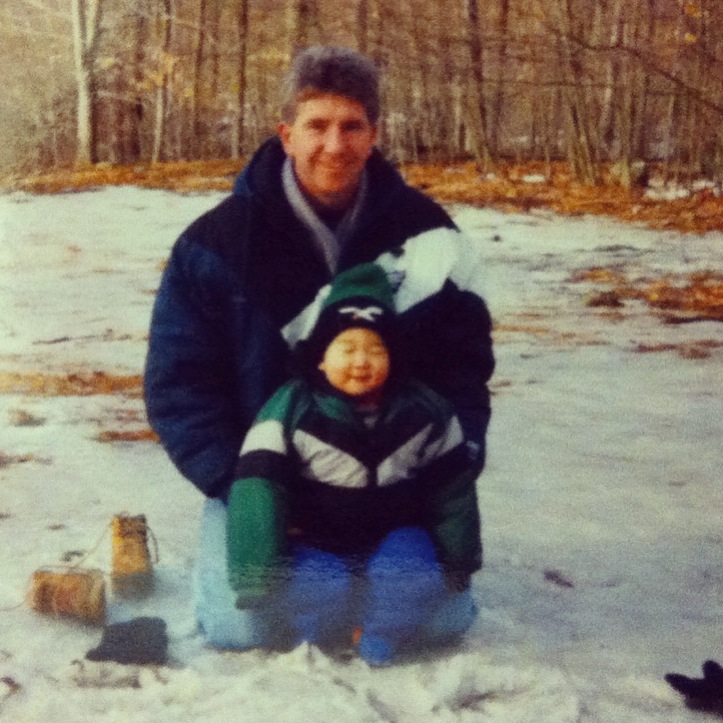 We All Bleed Green

In January 1996, the entire east coast was hit by one of the fiercest snow storms in history. A category 5 blizzard made landfall January 6th and last 4 days. The entire coast was left paralyzed. However, one family made it their mission to fulfill a dream. Although the weather was a major deterrent, the young couple and their son were set on traveling from the suburbs of Philadelphia to JFK Airport in New York City in the wake of this massive blizzard. Although it was two weeks removed from the storm, driving conditions were still poor and many hoped they delayed their trip. None of this mattered so these warnings fell to deaf ears. With their midnight green scarfs and gloves on, they commenced on their journey.

After hours of travel, they finally arrived at the airport. Their young son paced the airport in anticipation. The couple put in a bid for a key free agent and they were now bringing in a new member to Eagles nation. As the passengers made their way off the plane, the family kept a sharp lookout for their new addition to the team. Then a woman with a baby in her arms entered the room and they knew their world was about to change. The newest member of the team had just arrived. Me, Christopher John Patrick Mallee.

For those who do not personally know me, I was adopted as an infant. My parents had also adopted my brother Tim four years prior. My mother and father always wanted children and more importantly, they wanted children so they could teach them how to fly with the rest of the fan base. If you closed your eyes and did not know how I looked and I talked and described myself, you would think you were talking to a young Irish kid from outside of Philly. Well, you wouldn’t be right and you wouldn’t be wrong either.

I am the perfect example of, “don’t judge a book by it’s cover.” My dad’s side of the family is as Irish as could be. My Pop Pop’s cousin was the police chief of Dublin, Ireland! When people meet me, they always wonder why I do not have an Asian accent or why I do not match stereotypes. I just say, “my parents raised me to be a scholar, a gentleman, and an Eagles fan.” So when I meet people, I greet and try them all of the same, because I know how it feels to be judged for looking/acting differently than expected. However, I learned in life that when no matter who you are or where you are, if you are wearing midnight green and run into a fellow fan, you have already been accepted.

If you are wondering how this relates to the Eagles, here it comes people. The fan base of the Philadelphia Eagles and the organization as a whole is microcosm of all of the great things in the world. Eagles Nation comes from all walks of life. We are all from different places, look different, sound different, and see different, but most importantly, we all Bleed Green. The 2017-18 Super Bowl team won because we were more than a football team, we were a family. A group of extraordinary yet different men, faced countless struggles but they faced them together and head on and came out on top. We as an entire fan base and team personify the power of strength in numbers. When you are an individual fixed on changing something, you will be but a whisper. When you are an individual who inspires a collective group of people with a common goal, you can change the world.

The Eagles organization is not just a football team, they are everything good in this world. Every day, they work to inspire others and work to make not only their team but this world a better place. Howie and Doug bring in guys like Chris Long who provides fresh water and books for those in need. They bring in guys like Carson Wentz who builds sports complexes and schools in third-world countries. We have an owner who has raised millions of dollars to help individuals with autism and the families those individuals live with. So when I hear people talk negatively about my team, I take it to heart.

When someone tells me that I am a good person, I say, “I’m an Eagles fan. That’s how I was raised.” Real Eagles fan’s know hurt. We know patience. Most of all, we know love. We love this city and we love this team. We get mad because we care. We care because this means something to us. We don’t go to games to take selfies and post a pic with our cheese steaks. We go to games because a W means we can enjoy the rest of the week before having an anxiety attack next Sunday.

That is why I love this team. On any given Eagles Sunday, you could be a janitor or you could be the president of a fortune 500 company, it does not matter. You both bleed green. What is on the outside does not matter. Your wallet could be empty or it could be full, as long as your heart is full of love for the birds, you can stand shoulder to shoulder with me and cheer on our boys. My entire family, whether it is my mother’s or father’s side looks at me and see’s family. The Eagles, whether it is on offense or defense looks side to side and see’s family. Whether you are in the Linc, a bar, or your buddy’s basement, you see brother’s and sister’s in green. This is what it means to be an Eagles fan. This is what it means to be the best fan base in the world. Thank you for coming to my TedTalk. As Always, Fly Eagles Fly!