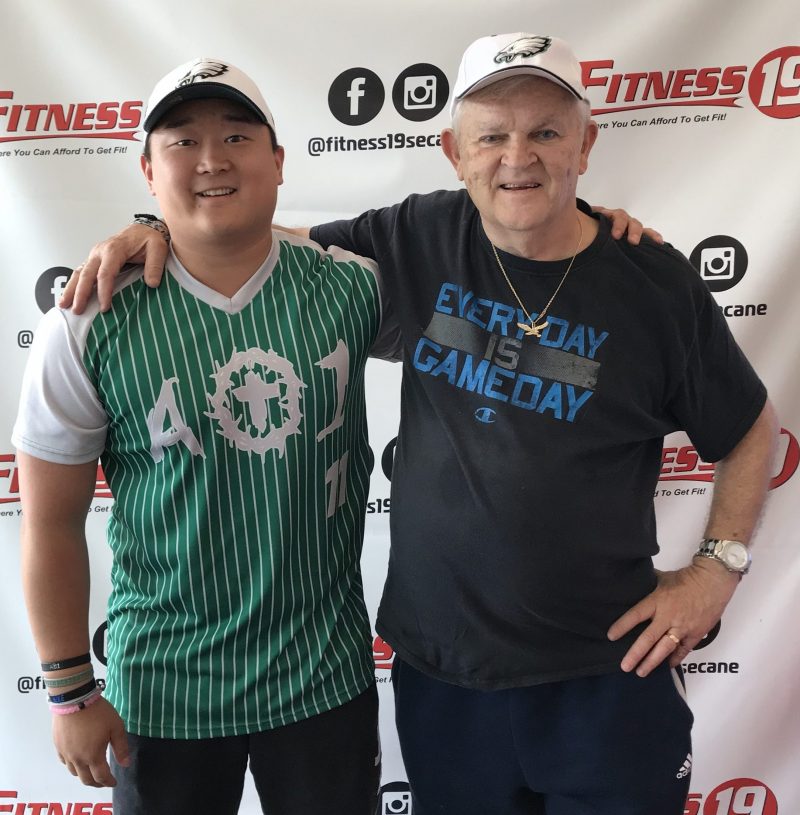 In the city of Philadelphia, there are a few notable people with the name William. William Penn, Will Smith, and William “Bill” Bergey. But on game day at the Linc, there is one William who steals the spotlight from the rest. That is Bill Dewees, the 12th man in section 119/120. In regards to popularity, even the Chickie’s and Pete’s in section 119 takes a backseat to Bill. Bill has been an usher at Lincoln Financial Field for 8 years. More importantly, Bill was a season ticket holder for 43 years.

The 1960 Philadelphia Eagles season was their 28th in the NFL. To end the season, the Eagles’ defeated  the Green Bay Packers in the NFL championship game to win their third league title. The city of Philadelphia was buzzing and so were the box offices as fans were flocking to secure season tickets. Gene Sullivan, Bill’s brother in law was the man who made Bill into a true die hard Eagles fan. Gene and Bill were sick of missing out of the action live and in 1961, they finally secured season tickets.

For years to come, Bill and Gene attended every game possible no matter if the team was winning or losing. Through rain, shine, or snow, the dynamic duo would be in their seats. They just loved their team. Bill showed me his right forearm where he had an Eagles helmet, the letters C and B, and the number 60 tattooed. Chuck Bednarik was the heart and soul of the Eagles for over a decade.

“He was the best player to ever do it in Philadelphia. Every play he was going 100% and we loved him for it.” said Bill as he pointed right at his forearm.

Unfortunately, not all great things last forever. Gene passed away and Bill was lost without his brother in green. After 43 years of attending games at Franklin Field, the Vet, and the Linc, Bill decided to give up his seats in 2004. His love for his team was still there, but without Gene, the games were not the same. Years went by and just like the Eagles, Bill just felt stuck. Just a constant feeling of being so close to feel something you always wanted or want to get back but it is just out of reach.

After the 2009 season, enough was enough. After a talk with his loving wife, Bill was ready to make a change. After some doing, Bill was now an official usher for the 2010 Eagles season. Management assigned Bill to section 119/120 which was around the 40 yard line on the away side. Even though he was looking at the opposing team, he felt right at home. From day one, the stadium goers loved Bill. He was always quick to greet everyone with a hello and a smile. He was always on time and excited for each game. Season ticket holders in his section became like family. That feeling that Bill had been missing after he lost Gene was finally back.

In 2017, Bill watched in awe as the Eagles fought injuries, doubt, and a grueling schedule. Even when Carson went down and many people’s hopes of a first Super Bowl were lost as well, Bill kept the faith. The team was destined for greatness. Bill cheered from the tunnel as the Eagles defeated the Atlanta Falcons and Minnesota Vikings to secure the NFC Championship title. On February 4, 2018, Bill, his family and friends gathered to watch the Birds take on the New England Patriots, the team who had defeated us in our last Super Bowl appearance in 2004. This time, we would not be denied. Nick Foles and company dropped 41 points on the dynasty Pats and secured Philadelphia its first championship since 1960. As Bill celebrated in joy, he was suddenly overcome by immense sadness as he thought of his old pal Gene. The man who had taught him how to be a die hard Eagles fan. The man who sat side by side with him through every high and low. Bill just wished that Gene could have been alive to witness something that they dreamed and hoped for. However, Bill knew that Gene was there in spirit and was cheering loud as ever as Nick Foles hoisted the Lombardi Trophy for all of the world to see.

The Super Bowl season was over and it was back to business in 2018. As the Eagles geared up for another season, Bill was ready for to enter his eighth year at the Linc. However, sudden news cut his season short. After a visit to the doctors, Bill’s worse fear was confirmed. As the Eagles season was starting, so was Bill’s fight against pancreatic cancer. Although he was discouraged at first, the fighting spirit of a true Eagles fan came alive. Bill signed on for 44 weeks of chemotherapy and the battle began.

Just like the Eagles season, there were more downs than ups, but both Bill and the Birds kept the faith. In week 13, Bill and his daughter attended a game verse the Washington Redskins in his section. Regulars in his section broke down in tears and were just thankful that he was ok. They did not know why their beloved usher was missing all year and were keeping the faith that he was in good health. Dozens flocked over to Bill to greet him for nearly half of the game making it almost impossible for him to watch the game.

“I love the people. They are why I do this. I couldn’t even watch one darn play without someone running up to me.” said Bill.

Bill was just happy to be back in the Linc and amongst the people. The true colors of Philadelphia came out that night as regular attendees and strangers alike praised Bill for making it out to the game while he was battling cancer. Even if it was just for one night, all was right in the City of Brotherly Love.

As Nick Foles sparked some life into the Eagles, Bill found some more magic of his own. After the conclusion of his treatment, Bill’s tests came back clean and he was in full remission. Although Bill still will be receiving shots of lupron as treatment, he was back and ready to enjoy the rest of the season cancer free.

Now that he is healthy, Bill has his heart set at making a comeback of his own in 2019. In hopes of returning to his post at section 119/120, Bill attends his home gym Fitness 19 in Secane, PA and gets his daily workout in. While there he chats up fellow Eagles fans and discovered that one of the staff members and himself have a special bond.

One day, Bill was doing his regular bike work out. He peered over to his right and saw a staff member wearing green shoes, an Eagles t-shirt, and an Eagles hat. Odds are they might get along. But something else was familiar. As Bill and this fellow Eagles fan bonded over sports talk, the young man’s eyes lit up.

“Hey Bill, you wouldn’t happen to work down at the Eagles games would you?” said the employee.

Like a strike of lightning hit Bill, he focused in on the young man’s face and then realized where he knew him from.

I just nodded in agreement and extended my hand to greet the man who had greeted me at section 119 for so many years. My dad worked at the Vet for years and even had season tickets for over twenty years before giving them up to watch my brother and I’s sporting events Sunday’s… No, I still have not forgiven him yet but yes, I appreciate his sacrifice. My brother is one of eight children and our entire family is gigantic. We are the proud owners of a dozen or so season tickets. My Uncle Johnny, Uncle Charlie, and Uncle Doc all have seats in section 119. So for years, I have been lucky enough to find myself at the 40 yard line watching our birds play.

Every game, I would always stop to talk to Bill and see how he was doing. So, it was weird to me last year when I noticed that Bill was not there. I was ecstatic to find out that Bill was doing well and that I would always have some to talk sports with at work. After weeks of sharing stories, I knew that I had to share his story with you all. After talking to Bill yesterday letting him know that I was writing an article about him, Bill looked me in my eyes as he pointed right at me and said,

“I wake every day, thankful that I am here. I just try to be a decent guy and do right by others. Life is going to kick you around more often than not. Just gotta put on a brave face and keep your faith. Just like being an Eagles fan, you have to fight through the tough times and celebrate the victories. Keep being you Chris, and always believe in our team”

I hope that Bill finds his way back to section 119/120 for the 2019 season. If you happen to pass by that section, stop by and tell him Chris sent you. As always, Fly Eagles Fly! Don’t worry people, we are less than 100 out from Eagles football and some more of this energy…

Almost 9 months ago at the Linc

The energy Eagles had pregame, you just knew they were going to the Super Bowl