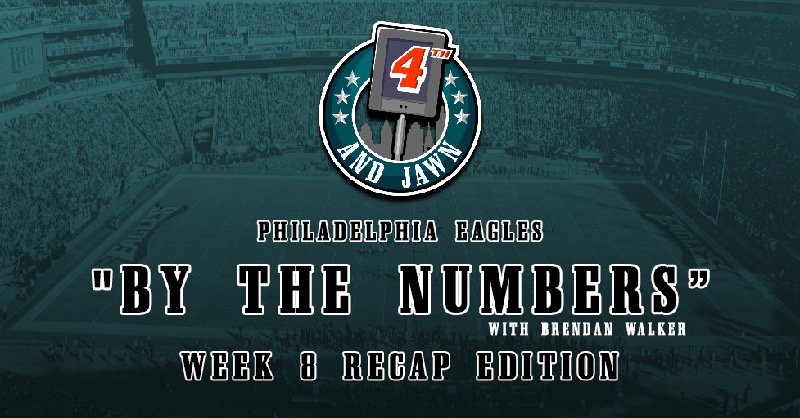 In this weekly edition of “By The Numbers” we will analyze the statistical leaders of the Philadelphia Eagles in comparison to each of their NFC East rivals after Week 8 play.

Before we compare the top Eagles performers to their rivals, here are the leaders amongst the Eagles own teammates in Week 8:

The Eagles brought their best across the pond as they faced a struggling Jaguars team. Carson Wentz spread the ball around and the defense did not break in the second half as they have shown they are susceptible to in the past.

Eagles players compared to their NFC Rivals (through Weeks 1-8):

Just about half of the 2018 NFL season is officially in the books. Right now, the NFC East’s statistics sample size tells a lot about how each team is fairing this season without even looking at the current standings.

The Eagles have been lacking in the turnover count this season. They are 24th in interceptions and 25th in forced fumbles. However, the team is getting opposing offenses off the field as they are a top-10 team in both sacks and passes defended—8th in sacks with 22 & 5th in passes defended with 49. The Eagles offense has also stepped up recently. The team leads the entire NFL in time of possession with 33:46 per game. A lot left to do for the defending world champs, but they’re starting to find a groove quickly.

Washington has been no slouch either. Currently at first place in the NFC East at 5-2, the Redskins defense has been what has allowed them to win this season. They are 4th in total defense and 4th in forced fumbles and while their total interceptions number is not stellar, D.J. Swearinger is playing lights out this season.

It seems like every week I’m saying the same thing about the Giants. They have a lacking pass rush, Eli Manning needs to retire, and the stars they have on the team are just being wasted away by the coaching that is there. Odell-Beckham Jr., Saquon Barkley and Landon Collins are all top-5 players at their respective positions, but being 1-7 has plagued this team into having an unconfident mindset.

The Cowboys were on a bye so their positions have dipped, but in Week 9, the Eagles and Giants are off. A lot of fluctuation happening in the NFC East.

Next week’s “By The Numbers” edition will include an analysis of Week 9’s performances along with a totaled analysis from all completed weeks.