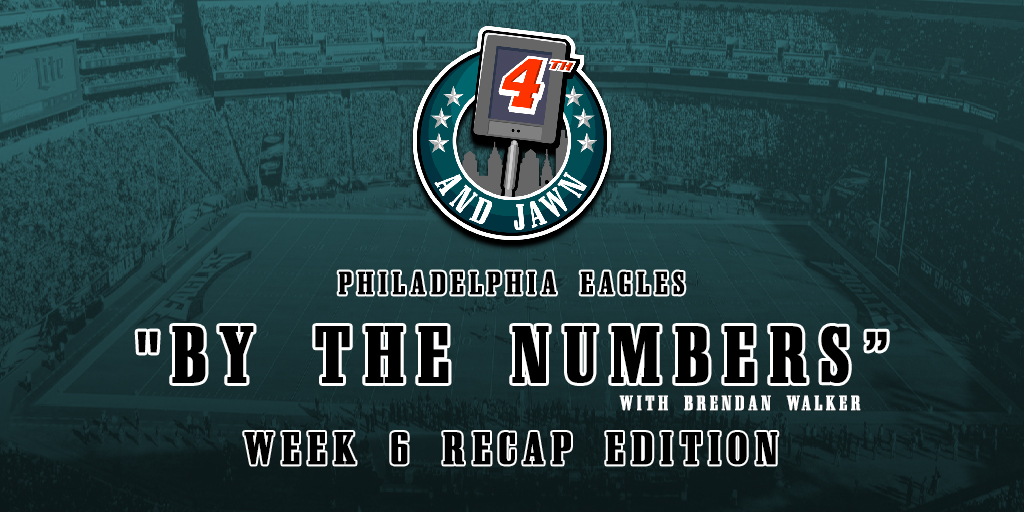 In this weekly edition of “By The Numbers” we will analyze the statistical leaders of the Philadelphia Eagles in comparison to each of their NFC East rivals after Week 6 play.

Before we compare the top Eagles performers to their rivals, here are the leaders amongst the Eagles own teammates in Week 6:

In a much needed bounce back game, the Eagles handled their business in a divisional matchup against the New York Giants. After a defeating loss against the Minnesota Vikings, the Eagles offense got its gears moving which eased the pressure off of the defense. The Giants offensive line was no match for the Eagles defensive line as they totaled four sacks and 13 QB hits.

Eagles players compared to their NFC Rivals (through Weeks 1-6):

It would seem as though Week 6 was a great week for the NFC East, except for the Giants. The only two major statistical changes to happen across six weeks are that Carson Wentz has passed up Dak Prescott for 3rd in the NFC East in two less games and Cowboys rookie Leighton Vander-Esch has emerged as the new leading tackler among all defensive players in the division.

The Eagles handled the Giants on Thursday Night Football. The offensive line gave Carson Wentz the time he needed to rack up three touchdown passes. The defense applied pressure all night on Eli Manning. The one positive Giants have after that game was that they do indeed have a stud in Saquon Barkley. He may not have been the wisest draft selection, but the talent is well worth the pick.

The Redskins were able to pull out a close victory over the Carolina Panthers, who just so happen to be the Eagles next opponents. The game had a very mediocre feel to it between two very mediocre teams at this point in the season.  Adrian Peterson has slowed down a bit which explains why they are 25th in the NFL in total offense (344 ypg).

I would say the Cowboys got lucky, but they weren’t. They played a great game against the Jacksonville Jaguars who had no answer on defense for Ezekiel Elliott and Dak Prescott. There will always be those games where you never quite understand how the score ended up where it is. Cole Beasley stepped it up big time establishing himself in this game as their true No. 1 receiver.

The division seems neck and neck with the Redskins, Cowboys and Eagles while the Giants look to be in a restart mode despite having one of the most talented running backs in the league.

Next week’s “By The Numbers” edition will include an analysis of Week 7’s performances along with a totaled analysis from all completed weeks.