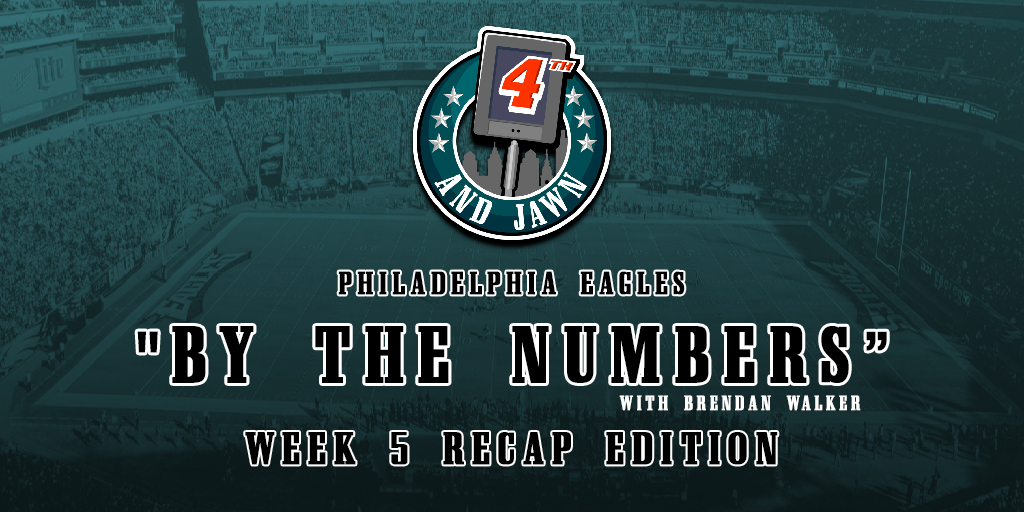 In this weekly edition of “By The Numbers” we will analyze the statistical leaders of the Philadelphia Eagles in comparison to each of their NFC East rivals after Week 5 play.

Before we compare the top Eagles performers to their rivals, here are the leaders amongst the Eagles own teammates in Week 5:

The Eagles were put in their place as the Minnesota Vikings won their mini Super Bowl at NovaCare Complex. The game was evenly matched but the Eagles beat themselves up with multiple mistakes. Defensive woes continue for the birds but nothing is being changed

The entirety of the NFC East was bad in Week 5. Every team in the division lost this past weekend which makes the “NFC Least” title is making its way back.

The Eagles haven’t learned on defense. The Titans in Week 4 were one thing, but going against two of the most solid route runners in the game in Adam Thielen and Stefon Diggs, the secondary was crumbled and burnt all game long. Carson Wentz and the offense have their own issues to sort out, but it isn’t nearly as big of a problem as the defense. Jim Schwartz needs to change something and soon.

The Cowboys played a consistent came versus the Texans but ultimately DeAndre Hopkins and his plethora of spin moves in overtime resulted in Dallas losing. It’s not shocking that the running game is doing much better than their passing game, but in this Texas battle The Texans just had a little more talent.

I’m not sure what to make of the Giants so far. Or am I? Eli Manning still leads the division in passing, Odell Beckham is still the lead receiver and Barkley now tops the touchdown leading spot. For an offense that is so productive, their defense is the side that is holding them back. The lack of a pass rush shows in the numbers. They only have six total sacks on the season while the Redskins, Eagles and Cowboys have 9, 12, and 15, respectively.

A brutal loss for the Redskins as the whole league was watching the Saints to see if Drew Brees would make history (and he did). It’s tough going against a high powered offense like New Orleans when you can’t match it yourself. Alex Smith looked terrible and Adrian Peterson was hushed out of the non-existent running game. The only thing that helped the Redskins this week was that everyone else in the division lost as they still remain on top.

A division who’s leading team is only at .500 says a lot about the season. A lot of tough schedules means that divisional games are much more important.

Next week’s “By The Numbers” edition will include an analysis of Week 6’s performances along with a totaled analysis from all completed weeks.