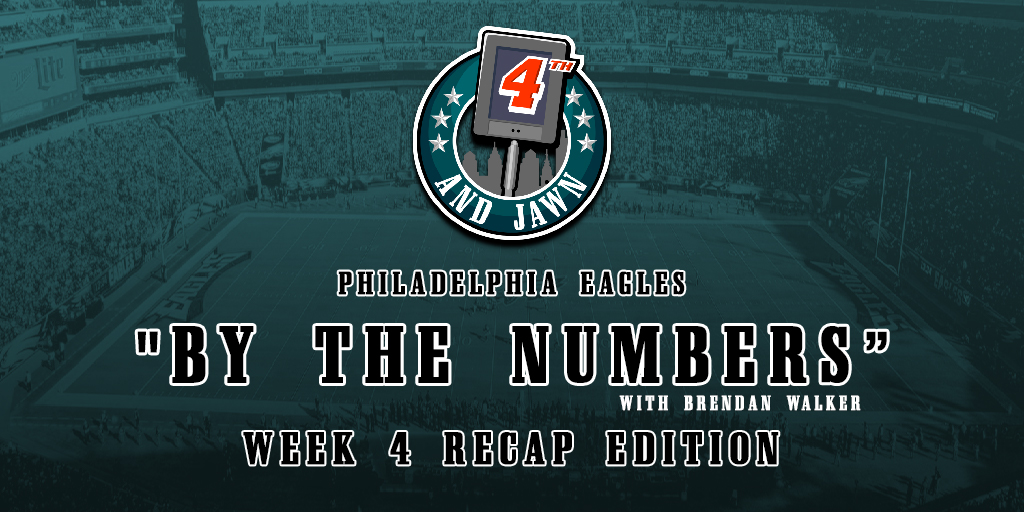 In this weekly edition of “By The Numbers” we will analyze the statistical leaders of the Philadelphia Eagles in comparison to each of their NFC East rivals after Week 4 play.

Before we compare the top Eagles performers to their rivals, here are the leaders amongst the Eagles own teammates in Week 4:

A road game versus a tough Tennessee Titans defense proved to be quite the competition for the Philadelphia Eagles. Carson Wentz did not receive much protection even though he performed very well on Sunday. Man-to-man coverage was non-existent and the secondary looked completely dead all game. Big plays were a killer, but what pains this team the most is that they had multiple chances on 4th down to stop the Titans in overtime and could not capitalize.

The Washington Redskins were on an early bye in Week 4 so the statistics this week are what they are. Despite their non-performance, D.J. Swearing still leads the NFC East in interceptions.

The Eagles blew a 17-3 lead and the game was ugly, simple as that. The secondary got tired late in the game and Mariota diced them in overtime. Lots of things for the Eagles to improve upon after starting 2-2 following a Super Bowl win.

The Cowboys played a very contested game with the Lions, but despite Dak Prescott actually playing decent, Ezekiel Elliott stole the show. He is still proving to be Dallas’ best weapon and only weapon for that matter. Over 150 rushing yards and being the team’s leading receiver will get it done every time.

Eli Manning has over 1,000 passing yards in the first quarter of NFL play this season. Odell Beckham is leading the NFC East in both receptions and yards. Landon Collins is playing well. So whats the problem? Has it been their schedule? There’s a real issue in New York after beefing up their offense in the draft. Or maybe it was that yacht photo. Not quite sure.

Without even playing, the Redskins remain at the top of the NFC East at 2-1, the Eagles are tied for 2nd at 2-2 with the Cowboys, and the Giants sit at the bottom with a 1-3 record.

A quarter of the season has come and gone and if someone said the Redskins would be at the top after four weeks I would have said they were crazy. The record shows that they are the best team in the NFC East right now, but October football is even crazier than September.

Next week’s “By The Numbers” edition will include an analysis of Week 5’s performances along with a totaled analysis from all completed weeks.