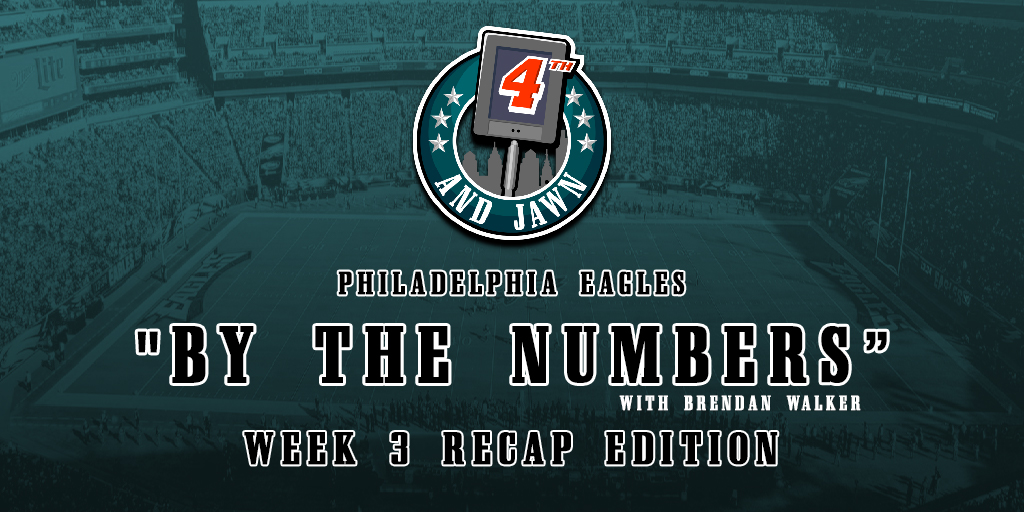 In this weekly edition of “By The Numbers” we will analyze the statistical leaders of the Philadelphia Eagles in comparison to each of their NFC East rivals after Week 3 play.

Before we compare the top Eagles performers to their rivals, here are the leaders amongst the Eagles own teammates in Week 3:

In a much tougher exhibition than expected, the return of Carson Wentz was the highlight of the day. The Eagles struggled offensively after the first drive and without much wide receiver help, Wentz had to rely on his tight ends most of the time. Andrew Luck appeared to be in the form he’s always been in as he and his wide receiver corps attacked the defense through the air. The Eagles rush defense held the Colts to less than 100 rushing yards, but the final score showed that the Eagles still have issues at turning the ball over.

Through three weeks, the expectations that were set for each NFC East team definitely do not matchup with how the teams are seen at the moment. The Redskins have handled their own, taking down the Green Bay Packers as one of their wins, the Giants and Cowboys were though to be improved in some analysts’ eyes yet they have been disappointing to watch, and the world champion Eagles have looked less than impressive despite Carson Wentz’s return to action.

Wentz is back and with that the offense should get back on track to how they faired last year, however Alshon Jeffery’s presence is still being felt. Thankfully the team has two stellar pass-catching tight ends in Zach Ertz and Dallas Goedert to carry the load (the latter finally had his breakout game).

Against a team that is deemed as lackluster, the Cowboys looked awful. Earl Thomas basically dominated the entire Cowboys offense then later asked if they needed him. Some sort of weird love hate relationship going on there. All in all, the Cowboys defense has grown a bit, but with Dak playing the way he is, the team will be mediocre at best all season.

The Giants almost lost to the Houston Texans after Deshaun Watson’s comeback efforts. If you look at the stats, Eli Manning hasn’t been completely terrible completing 73.6% of his passes, it’s just that the offense is so bland and very predictable. Also, the Giants defense isn’t quite the elite form that people thought it would be. Having a losing record can be frustrating when you have a star running back and receiver without and offensive line to block.

Jordan Reed hasn’t gotten injured yet, so Redskins fans can rejoice at that. He has become the No. 1 option for Alex Smith in the passing game and Adrian Peterson still looks great. What comes across as shocking is that their defense can crumble against Andrew Luck but dominate against Aaron Rodgers. The Redskins-Green Bay matchup is always a coin toss but I’m not sure why.

The Eagles and Redskins top the NFC East at 2-1 while the Giants and Cowboys both tie for bottom spot at 1-2.

After three weeks, the NFC East has been unpredictable yet predictable, if that makes sense. We know that certain teams have issues at quarterback, and others have problems with receiver depth. Each team’s defense can also be hot one week and totally be ice cold the next week.

The Redskins are the only team with an early bye in Week 4, so now this series will become a little skewed week by week. It will still be a contest between each NFC East team to see how team’s are putting up stats on the board each week, but it will be noted if a team is not playing.

Next week’s “By The Numbers” edition will include an analysis of Week 4’s performances along with a totaled analysis from all completed weeks.