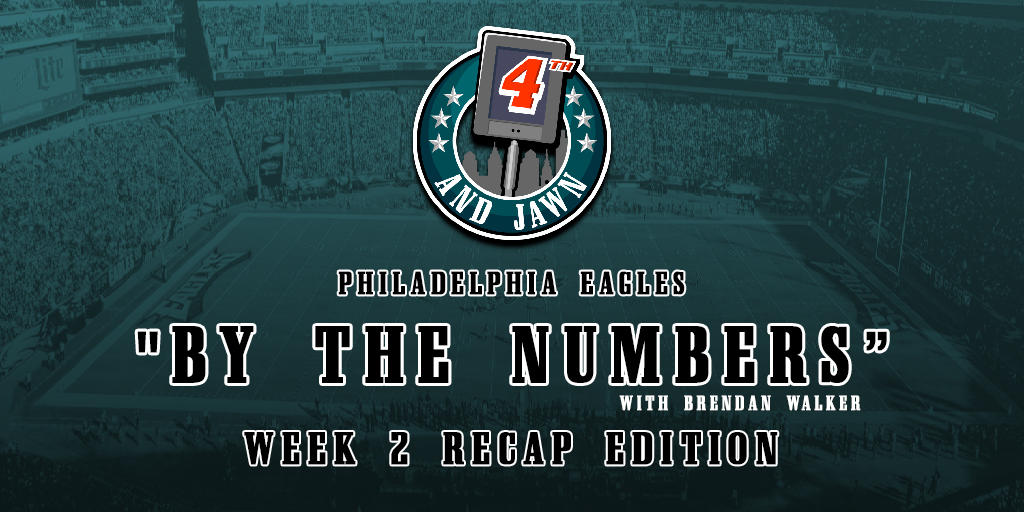 In this weekly edition of “By The Numbers” we will analyze the statistical leaders of the Philadelphia Eagles in comparison to each of their NFC East rivals after Week 2 play.

Before we compare the top Eagles performers to their rivals, here are the leaders amongst the Eagles own teammates in Week 2:

The Eagles played catch-up after trailing 27-7 in the third quarter so the running game was abandoned and the game was forced into Nick Foles’ hands. He recorded almost twice the passing yards as he had in Week 1, but could not matchup against what the Buccaneers were putting up throughout the game. The Eagles defense got tired and were burned frequently while going against a receiving corps containing Mike Evans, DeSean Jackson and O.J. Howard.

Eagles players compared to their NFC Rivals (through Weeks 1 & 2):

Going into Week 2, some things are pretty clear. The Dallas Cowboys do not have a passing game, the New York Giants focus only on getting the ball to their stars, the Washington Redskins ONLY use Chris Thompson in the passing game, and the Eagles need the running game to stay healthy for stabilization.

Fletcher Cox has said he wants to be the defensive MVP this year and with 2.5 sacks already, he’s clearly on pace to do so. He is a disruptive force up front.

In seven out of the past nine games, Dak Prescott has thrown for less than 200 yards, making it hard for any sort of passing game to come about. The Cowboys want to make Ezekiel Elliott a workhorse, but with offensive line issues, it will be hard to protect their franchise QB.

Speaking of offensive line issues, the Giants have crumbled so far despite an overall good draft they had earlier in the year. Eli Manning is not looking any younger and Saquon Barkley has become so heavily relied on that opposing teams know that they will either feed him or give it to Odell Beckham Jr.

Chris Thompson seems to be the only offensive weapon in Washington D.C. (he leads the team in receptions and receiving yards). Alex Smith took a step back versus the Indianapolis Colts. The only positive is that Adrian Peterson is showing flashes of his earlier self as he is the teams lead scorer with three touchdowns (tied for first in the NFC East with Eagles Jay Ajayi).

The Eagles, Cowboys and Giants are all 1-1 while the Giants sit at the bottom at 0-2.

After two weeks, the NFC East has been what has been expected: competitive. The first NFC East rivalry matchup between the Cowboys and Giants showed that things aren’t always what they seem, despite what the media has said about both team’s growth. The Redskins defense is relying on getting takeaways in order to stay in games. Carson Wentz returns to the team today and will start on Sunday versus the Colts. While it is an upgrade at QB, wide receiver issues will need to be resolved, and quickly.

Next Week’s “By The Numbers” edition will include an analysis of Week 3’s performances along with a totaled analysis from all completed weeks.