There was a lot of speculation surrounding Dallas Goedert and the Philadelphia Eagles during the pre-draft process, with many speculating that Goedert could be in play with the Eagles first round pick. The Eagles were clearly interested in the big tight end prospect from South Dakota St, justifiably so considering how good of a prospect Goedert really is.

Selected #49 overall in the 2018 NFL Draft, Goedert brings with him a ton of experience and potential as a key weapon in the Eagles offense moving forward. In his four years at South Dakota Sate, Goedert racked up 198 receptions, 2,988 receiving yards, and 21 career TDs, serving as the focal point of the offense in his final two years on campus.  Now let’s take a look at Goedert’s strenghts and weaknesses, and how he fits into the Eagles offense.

Goedert is a really capable receiver at the TE position, and can be moved all around the formation in order to maximize mismatches against smaller/less talented opponents. Goedert does a great job of catching with his hands, rarely letting the ball get into his body.

This highlight reel one handed TD catch has made the rounds on the internet, and for good reason! Goedert’s hands and overall athletic ability are on display here, showcasing exactly what he potentially brings to the Eagles.

Goedert consistently made difficult catches look routine at South Dakota State, this time making an over the shoulder “Willie Mays” catch for a long reception. These types of plays are supremely difficult, and the fact that Goedert makes the catch and gets both feet in bounds is incredible.

Goedert makes a tough falling down reception for the first down on the opponents side of the field. He shows great concentration on the play holding on to the ball after hitting the ground.

Here Goedert makes a difficult catch on the screen pass for a very short gain. Goedert’s receiving ability will potentially earn him playing time early on for the Eagles, as Peterson and the offensive staff look to create mismatches in the passing game.

Goedert recorded 21 career touch down catches at SDST and did so in a variety of ways, as he was leaned on heavily to score points for the Jackrabbits. This is certainly an area that the Eagles can use some help as the Eagles lose the  6 TDs former tight ends Trey Burton and Brent Celek contributed collectively in 2017.

Goedert again makes a tough over the shoulder reception, this time for a TD over the jumping defender. His size, strength, and length make him so hard to stop when he’s able to get his hands on the ball in the end zone.

Goedert makes an amazing TD catch readjusting his body to make the play and doesn’t let the ground dislodge it. He’s able to find the end zone from almost anywhere on the field, giving him sneaky double digit scoring potential as a full-time contributor down the road.

Goedert shows off great hands and footwork on this TD catch, getting behind the defense for another big time play.

SDST implemented Goedert in as many ways as possible to increase his scoring opportunities, and here Goedert fights off the defender to make a bobbling TD catch against North Dakota St. Goedert is a mismatch waiting to happen, and will be another tool to add to the RZ package of Alshon/Ertz/Sproles.

Even though Goedert often gets compared to Zach Ertz, one area where they’re drastically different is in their RAC ability. He fights off would-be tacklers with solid stiff arms and jukes to keep fighting forward to move the chains or score TDs.

Goedert takes the shovel pass and leaps over the defender for the first down. Goedert is nimble with the ball in his hands considering how big of a person he actually is.

Goedert works his way across the formation and makes the catch and runs for a nice first down. Though he isn’t a long strider, he has deceptive speed for his size.

Goedert expertly navigates the small gap between the two defenders in order for the nice catch and run for a big gain. Unfortunately the play was negated because Goedert fumbled trying to do too much.

Even though he’s unable to make the defender miss in space, Goedert uses his strength and length to fight over the tackler for a 1st down. Goedert will make defenses pay if they leave him alone in space, or if they expect a solo defensive back or safety can consistently bring Goedert down.

It’s clear that Goedert is all of his 6’5 256 lb frame, as he constantly bullies smaller defenders both as a receiver and as a blocker.

Goedert puts his full physicality on display on this play making the catch and dragging two defenders into the end zone for a TD. At 6’5 256 Goedert far too large for most safeties or slot corners, and is even tough for most LBs to cover.

Again Goedert makes a tough catch and again he’s dragging would be tacklers for extra yards. While some of this should be attributed to the level of competition, his ability to make tough catches and fight for extra yards is real.

Goedert uses his size and strength to break two tackles and dives for a big first down. He is determined when near the first down sticks or goal line, using his long outstretched arms to make plays.

Goedert walks up to the defender on this running play and straight yokes him up! He uses he clear size advantage to dominate the opposing player, moving him completely out of the play. Goedert’s size is potentially a huge reason the Eagles were intersted in drafting him in the first place. It’s not difficult to envision how he creates mismatches for your offense, and red zone scoring opportunities.

Goedert was used in multiple ways during his time at SDST, and made defenses pay no matter where he lined up. He should continue to be a toolsy player for the Eagles, and provides the offensive staff a versatile chess piece to deploy on game day.

Goedert takes the orbit screen and takes a moment to look downfield for any open receivers. When he doesn’t find any he takes off with the ball breaking several tackles for a short gain.

South Dakota St ran many types of screens to get the ball in their best play makers hands, and on this play he shows off his RAC ability as he maneuvers downfield for a big play.

This play was extremely creative AND dangerous as Goedert takes the hand-off from the RB coming back weak side, and then pitches to the QB from the 2 yard line.

On this play Goedert takes the shovel pass from the QB for a short gain. SDST ran this play a lot during the 2017 season looking to get Goedert the ball in space with blockers in front of him. This is a play that the KC Chiefs use often for TE Travis Kelce, and could be something the Eagles use to get Goedert involved early in the season.

Goedert is a work in progress from a blocking standpoint, much like Ertz was coming out of Stanford. Goedert is probably a little further on though as a blocker, and as he works on his technique with TE coach Justin Peele, he should improve drastically.

Here Goedert gets beat inside by the defensive end and the end almost makes the tackle for a loss in the backfield. Goedert has to do a better job of squaring the defender off and using his long arms to prevent getting beat like this in the future.

Goedert engages the defender this time and due to poor technique and footwork is easily tosses aside and thrown on the ground.

Goedert dances in space here but didn’t make contact with a defender and eventually uses lackluster effort to engage the opposing player. While blocking is definitely a growth area for the big TE, he does show on tape that he’s capable of winning his share of match-ups as a blocker. He will have to work hard at this aspect of his game, but he has the size, strength, and length to make for an above-average blocker.

Considering the number of career receptions that Goedert pulled in at SDST (198) it’s tough to knock him for a drop here or there. The issue with the drops witnessed on tape is that they’re more concentration issues than due to overall volume.

Goedert drops a pass over the middle of the field that he usually makes routinely. It could’ve been footsteps as the defender closed in, or him looking to make a bigger play after the catch, but either way this was a tough drop and a huge missed play.

This is another catch that Goedert makes constantly, and this is an easy catch that he drops because he takes his eyes off the ball. Goedert needs to watch the ball all the way into his hands before looking up field for bigger plays.

Here’s another drop in the flat, though Goedert does have to make a pretty tough adjustment to reel in the pass. Still, he gets both hands on the pass, and it’s a pass that he’s more than capable of catching. Goedert will need to minimize his concentration issues and make the most of every opportunity he gets in the NFL.

Dallas Goedert is a really impressive prospect that offers a lot for the Eagles in terms of size, scheme flexibility, and scoring potential. Paired with Zach Ertz, Goedert will help to form an impressive 12 formation and can be used as a chess piece in the red zone to maximize touch down opportunities for the Eagles offense. He’s also a really solid insurance plan for Zach Ertz, who has missed at least 2 games in the past 2 seasons, and has been slowed in several others due to injury. Long term Goedert could be Ertz’s replacement, as the Eagles incumbent starter has a rising cap number that the Eagles can get out of in 2019 (if they so choose). 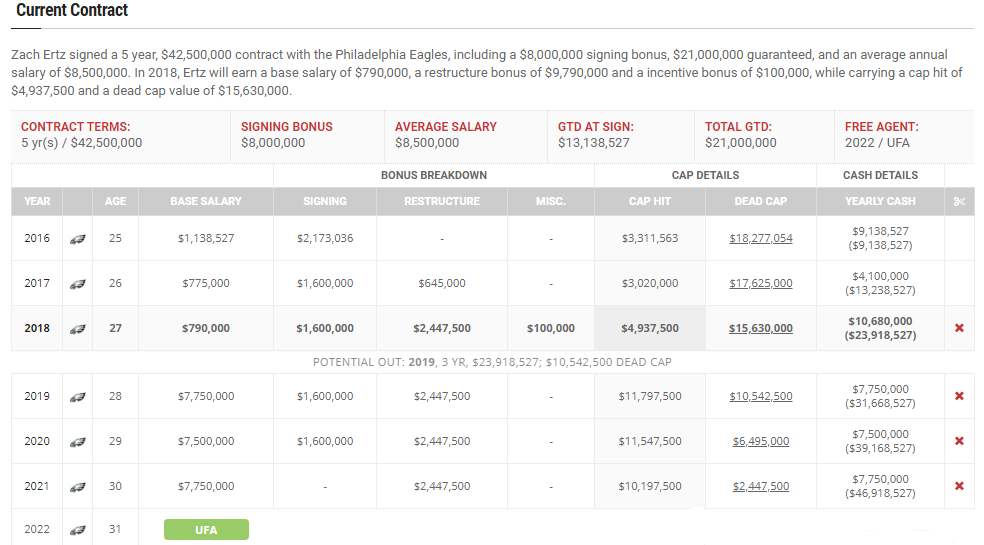