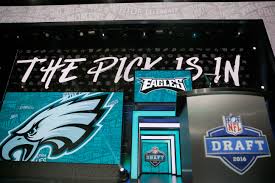 Eagles draft: Options for the Eagles on day two

After trading out of the first round, the Eagles are set to make a pick today on day two. With a lot of players still left on the board, the Eagles have a couple of options.

To recap, the Eagles gave up the 32nd pick and pick 132 to the Ravens for pick 52, 125 and a 2nd round pick next season. Although today’s second round pick is a little later than they would have wanted, they will still have a couple of great options on the board.

Now, when the Eagles are on the clock, where will they go?

Running back is a position the Eagles have seemed heavily invested in during the draft process. It is possible the Eagles will look to add USC RB Ronald Jones, LSU RB Derrius Guice or Georgia RB Nick Chubb. To me, that does not seem like the pick the Eagles will go for. Although you can say it would be a big boost for the offense, it does not have Howie Roseman and Joe Douglas written on it. After all, it is a deeper running back.

In my opinion, the Eagles will look to bring on the best defensive player on their board that’s left. Whether it is a safety, cornerback, defensive linemen or linebacker. The Eagles defensive line could use a younger player, as well as the safeties and cornerback and linebacker, are always worth bolstering. Names to look for are Justin Reid, Ronnie Harrison, Kemoko Turay, Malik Jefferson, Donte Jackson, Anthony Averett and Isaiah Oliver. Those are the players I can see the Eagles taking with the pick.

Another situation worth addressing is the possibility of the Eagles trading again for more picks. Every year it is rumored the Eagles are trading Mychal Kendricks, he could possibly be moved for a pick or package to move up in the second round. Something tells me Howie is going to work some magic tonight.