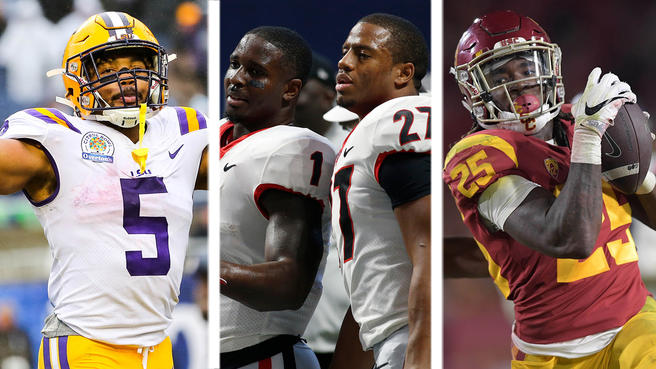 Are the Eagles playing it by the book at RB in the draft?

The NFL draft. The time of year that were so starved for football that we begin frothing at the mouth over 40-yard dash times and verticals.

Last night, many of us found ourselves sitting on the edge of our seats awaiting the last pick of the 1st round. After watching the rest of the NFL pick, we simply wanted two things: 1. Eagles draft Guice/Michel and 2. To hear “With the 32nd pick in the 2018 NFL draft, the WORLD CHAMPION Philadelphia Eagles select…” echo throughout Jerry’s World. We got neither. However, we should’ve figured this one out. The Eagles subscribe to the thought process that a decent running back can be found on the 2nd and 3rd days of the draft.

When was the last time the Eagles used their first pick to draft a running back, you ask? 1992, a man by the name of Siran Stacy was selected 48th overall, still not even in the first round! If you wanted to know the last time the Eagles selected a RB in the 1st, you’d have to go all the way back to Keith Byars in 1986 with the 10th overall selection. These decisions are not made by coincidence. There is a strategy to drafting other positions before running back and that is simply that a running back has the shortest life span in the league. You could be using your first pick on someone who possibly won’t be around or a shell of their former selves by the time they’re ready to sign their second contract.

So do not fret Eagles nation, we are playing this one by the book. The trade has allowed us to slide back 20 spots while moving up in the 4th and acquiring a 2nd rounder next season. Not only that, our history of drafting running backs on day 2 is a promising sight. In 2009, we drafted Shady McCoy at 53rd overall, one spot past the pick we have today. And we waited all the way until the 91st overall to draft Brian Westbrook. That’s the 2nd and 3rd round value Howie Hero will be seeking.