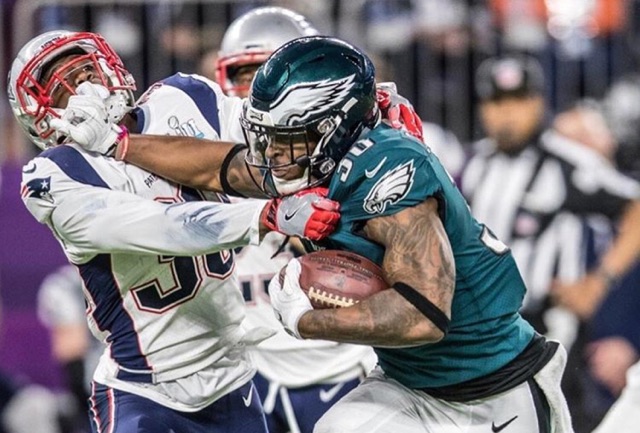 Corey Clement could have a breakout year in 2018

Although it seems like the NFL season just ended, we are already a couple weeks away from the NFL Draft. We inch closer and closer to the start of the new season with each day. Every year for every team there is a player who breaks through the wall. A player who takes a leap from the previous year and shines like a diamond in the next. The diamond for the Philadelphia Eagles in 2018 will be Corey Clement. Yes, you heard right. The undrafted Running Back out of Wisconsin that had a break out game, from a receiving standpoint, in Super Bowl LII against Bill Belichick and the New England Patriots. That guy.

The Eagles went into last season with a fully stacked, talented, Running Back core. There was never a number one starter as Running Back coach Duce Staley adjusted to the game plan and rotated players frequently. With the season ending injury to Darren Sproles, it allowed Corey Clement to enter the game day rotation. After the Eagles made a trade to acquire Dolphins Running Back Jay Ajayi, it was clear that Clement would be the third option on the depth chart. Clement flew under the radar last season as he didn’t put up huge stats but he did find the end zone six times during the regular season and caught a touchdown pass in the Super Bowl. His final numbers for 2017, including the playoffs, were 80 rushes for 354 yards with an average of five yards per carry and four touchdowns. Clement recorded 20 catches for 262 yards and three touchdowns.

With the NFL Draft a little over two weeks away, the Philadelphia Eagles currently have four Running Backs on their roster. Those backs are Jay Ajayi, Corey Clement, Donnel Pumphrey and Wendell Smallwood. The team lost LeGarrette Blount in free agency to the Detroit Lions with no intentions to resign him anyway. There is a lot of talk about the Eagles being highly interested in LSU Running Back Derrius Guice come draft time. It seems to be a unpopular opinion but I believe the Eagles shouldn’t target Guice with the talent we already have in Ajayi and Clement. They have the ability to either resign Darren Sproles or draft a Running Back in a later round.

When assessing Clement, this kid has everything that it takes to be a huge weapon for Carson Wentz and this Eagles offense. He has already shown that he can be a huge advantage in the passing game as he caught for 100 yards and a touchdown against the Patriots in the Super Bowl. He will only get better in the running game with the more attempts he gets. Agility is something that Clement has and uses to his advantage. The biggest question and opportunity for Clement is his patience. As a runner, having that ability is huge when it comes to waiting for your line to develop holes for you to hit. But despite that knock, his size, athletic ability and threat in the passing game could cause huge problems
for opposing defenses.

It’s no secret that over the past few years, the NFL has become a passing league. Not saying that the running game isn’t important because it is very much so, but in most cases teams tend to throw more than they do run. With Ajayi proving that he can carry the running game and do it at a high level , I expect Corey Clement to have a break out year with Doug Pederson calling the plays. It’s insane to think of the jump Pederson has made in play calling from year one to year two but the evidence of improvement is there. With great play calling, that nasty offensive line and a healthy Carson Wentz, Corey Clement could be that diamond in the rough that will light defenses up for years to come.