Player breakdown: How Fletcher Cox influenced the game vs. Falcons

One player who stepped up when the Eagles needed them to the most was the highest paid player on the field, Fletcher Cox. Like he did all season, Cox showed his worth and elevated the Eagles defense to a whole new level. On the day, Cox had seven combined tackles and one sack. He was a force to be reckoned with in both run and pass defense. When a  play had to be made, Cox made it. It did not matter if he was double teamed, tripled teamed and even quadruple teamed, Fletcher Cox beat the offensive line and made the necessary play.

Take a look at this first play.

I want to first note the gap discipline by the Eagles defensive line and linebackers, they are all in the necessary spots. This play is frozen here because look at Cox, he is double teamed. But, the Eagles do a nice job with blitzing linebacker Mychal Kendricks which diverts one of the linemen blocking Cox and basically forces Falcons running back Devonta Freeman to run right into Cox. It is really good discipline and scheming by the Eagles, but the finish to this play was an important part and Cox ended up stopping Freeman behind the line of scrimmage, big play!

Cox is just going to stand his linemen up and really dictate where this run is going to go. By doing so, he took away the cut to the outside and again Freeman is forced to run in the space he thinks he is given. The end result is yet again a loss of yards as Freeman ran right into Cox’s arms.

This play shows his ability to rush the passer. 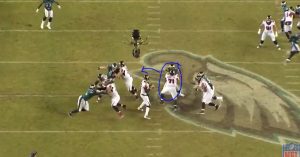 Yet again, it is a 1 v. 1 look. Cox stood up the linemen and continued to manhandle him like he did all game. Cox single handily broke down the pocket and forced quarterback Matt Ryan to step up. When Ryan took a few steps up in the pocket, Cox reached out and brought him down. Again, leaving Cox 1 v. 1 was not a smart idea and after this play, the Falcons learned not to do that anymore.

Last but not least, this play shows the sheer desire and will Cox has. (Special).

This play is a screen pass to a wide receiver. Cox, a defensive tackle quickly notices and starts race towards the runner, Taylor Gabriel. Mind you, Gabriel is not a slow guy. Cox is hot in pursuit and ends up being one of the defenders to tackle Gabriel outside of the numbers. This play illustrates the desire, will and pursuit a defensive tackle like Cox has if you did not think he was a special play, this play shows you why he is.

Fletcher Cox was a big bright spot for the Eagles in their win over the Falcons. He was a man on a mission and played one of the best games of his career. Cox is one of the complete defensive tackles in the league and one who is a mismatch for an offensive lineman every time he steps on the field. Going up versus the Minnesota Vikings, if the Eagles get another performance like this one from Cox, the Vikings are going to have a very tough time offensively.