Week 3 the Eagles played an exciting nail biter, with kicker Jake Elliott knocking through the game winning kick with no time left on the clock. While Philly got off to a solid start, there were definitely areas to continue to work on. The defense didn’t give up a ton of big plays, but the Giants were able to produce a few TD’s through the air. Offensively, the Eagles were able to put together a solid day running the ball, but QB Carson Wentz continues to struggle with his deep passes.

Now let’s take a look at the individual players that played well (3 UP) and the players that struggled (3 DOWN):

DT Tim Jernigan makes the 3 UP list for the second week in a row, and this week he was a disruptive force going against the Giants offensive line.

Jernigan uses his quick first step to blow past the RG and RT in order to make the tackle for loss on this run play. Jernigan is a strong and physical player that stepped up big in DT Fletcher Cox‘s absence.

Jernigan uses his power to push the center into Eli Manning‘s face, making it harder for Manning to step into his throw.

Here Jernigan wins quickly with a swim move and is able to pressure Eli Manning into an inaccurate pass that’s broken up by CB Patrick Robinson. It’ll be imperative for Jernigan to consistently show his ability to pressure the QB and disrupt the running game while Fletcher Cox is out. Versus the Chargers, Jernigan will be relied on to slow down Rams RB Melvin Gordon, who is capable of putting up big yards on the ground.

Philly was finally able to get the run game going, as Blount and RB Wendell Smallwood combined for 138 rushing yards on 24 total carries. Blount accounted for 67 of the total 138 on 12 carries, and also scored a key TD.

Blount finishes off the Eagles drive with a short TD, using his power to keep his legs going through contact. This is something that Blount did all afternoon.

Blount shows off his impressive strength on this run, breaking multiple tackles after he gets through the initial hole. This is the type of back that the Eagles thought they were getting when they initially signed Blount.

Blount breaks off a short gain here, in which he has to break tackles in the backfield in order to avoid a short loss.

Blount shows off his great agility, along with his strength on this run. This is what the Eagles expect from Blount as their lead rusher, and his running ability will now take on additional importance with RB Darren Sproles done for the season. Whether Blount is able to consistently be the player we saw on Sunday will determine just how far this Eagles offense can go.

It’s only right that Jake “The GOAT” Elliott makes this list, as his kick was incredible on so many levels. He pulled in “Pepsi NFL Rookie of the Week” honors, as well as “Castrol EDGE Clutch Performer of Week 3″ for his performance last Sunday.

Let us not forget that Elliott actually missed a 52 yard field goal wide left in the 3rd quarter. Elliott has missed 2 of his 6 total field goal attempts so far this season.

Elliott’s miss definitely can’t overshadow this 61 yard kick that he nails to win the game. This is a gutsy kick on all fronts, and is a kick that was far from a sure make. Respect to Elliott for believing in his ability, and advocating for his chance to win the game for his team. Elliott will continue to be leaned on for the remainder of the season, and this long kick is certainly encouraging. 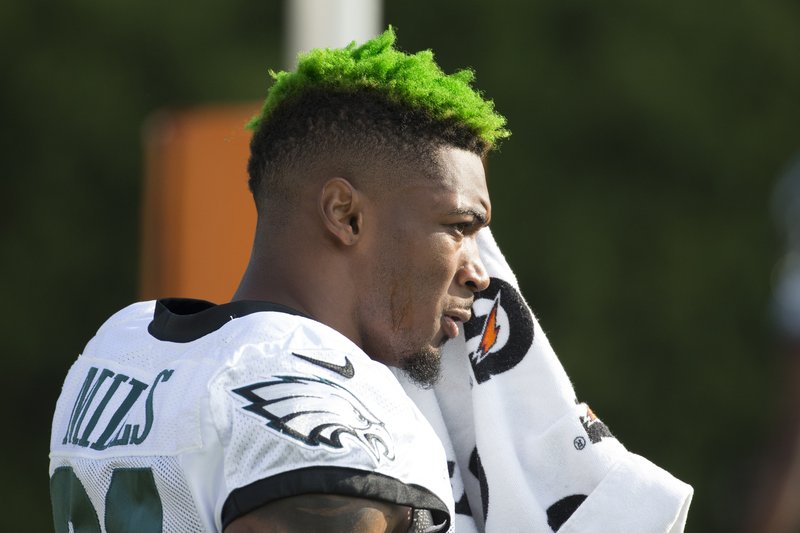 It’s going to be very difficult for Jalen Mills to avoid coming up on the losing end of the majority of his one on one match ups each week. Squaring off against the best WR on each opposing team is no small feat, but it’s Mills’s weekly reality.

Mills gets beat for a red zone TD by Giants WR Odell Beckham Jr, on a play where Beckham Jr makes an incredible catch.  On tape you see where Mills’s lack of technique costs him opportunities to make plays on the ball.

Mills gives up another TD to Beckham Jr, and on this play Mills bites hard on the double move. His eyes are locked into the backfield watching Eli Manning, making Mills susceptible to this easy route combo by Beckham Jr. Mills has to play more disciplined to keep himself in better position.

Mills is playing off of Giants WR Sterling Shepard and gives up the easy quick slant in front of him. Mills plays a “bend but don’t break” sort of technique at outside CB, but it often works against him. This is definitely the byproduct of the game plan developed weekly by DC Jim Schwartz, and when the defensive line can generate pressure it works. But on Sunday the Giants offense got the ball out quickly, and burned the Eagles corners with short passes that turned into longer gains.

This was a tough choice because truthfully Robinson made some plays in the Eagles game that really helped turn the tide for the defense. He also subsequently gave up some big plays to the Giants receivers, namely Sterling Shepard.

Shepard beats Robinson on a quick out route at the goal line and barely misses a TD on the play. Even though he was draped on him, Robinson still gives up the reception. Robinson struggled to keep up with Shepard’s short area quickness and elusiveness.

Robinson gets beat by Shepard on the quick slant, and Shepard takes the reception all the way to the house. Robinson need to be able to make the tackle here, in order to prevent Shepard from turning a short completion into a long TD.

Again, it wasn’t all bad for Robinson, as he was able to make a few positive plays against the Giants offense as well.  Here Robinson makes the INT off a passes that was tipped by Eagles LB Mychal Kendricks. Versus the Chargers though Robinson can’t afford to bring anything less than his “A game” when he squares off against Chargers WR Keenan Allen.

Jason Kelce has had an inconsistent start to the 2017 NFL season, as have most of the Eagles offensive linemen. LG Chance Warmack also struggled mightily this game, and was a close second for this final spot. Kelce gets the nod here because he’s envisioned as the starter, but has done little to show he’s more than an average player at his position.

Kelce gets whipped here by the defensive tackle, and ultimately doesn’t block anyone on this play. Kelce struggles with strong defenders at the point of attack, and this game was no different. These sorts of plays show up more often than they should from Kelce.

Kelce gets pushed well into the backfield, causing Smallwood to hesitate on the run. Kelce is the starter as of today, but realistically he may be a player that needs to gets “upgraded” in season. At the very least the Eagles will need to look into a replacement for Kelce for the 2018 season, as his skills are very obviously deteriorating (contrary to PFF‘s analysis).

The Eagles gutted out a great win against the Giants to make it to 2-1, but it obviously wasn’t all perfect. Philadelphia had multiple opportunities to put the game away well before Elliott’s game winning FG, but just couldn’t capitalize.  Losing RB Darren Sproles is a HUGE loss for this offense, and will now force Wendell Smallwood to prove he is a capable 3rd down back. The offensive line struggled in both pass protection and also run blocking, and blocking is a continued growth area for the Eagles o-line. Hopefully the insertion of LG Stefen Wisiniewski will provide stability on the left side of the line.

Defensively I wonder how long Jim Schwartz is going to be able to play off-man/zone and continue to be in position to hold down opposing offenses. Versus the Giants, the short passing game killed the Eagles, specifically the quick slant which is a staple of any West Coast Offense. This defense is definitely built off of their REALLY strong front 7, but without better play in the secondary Philadelphia will struggle to beat the better teams in the NFL.

Tune in next week, as I explore our 3 UP and 3 DOWN players from week 4 (hopefully another win)!