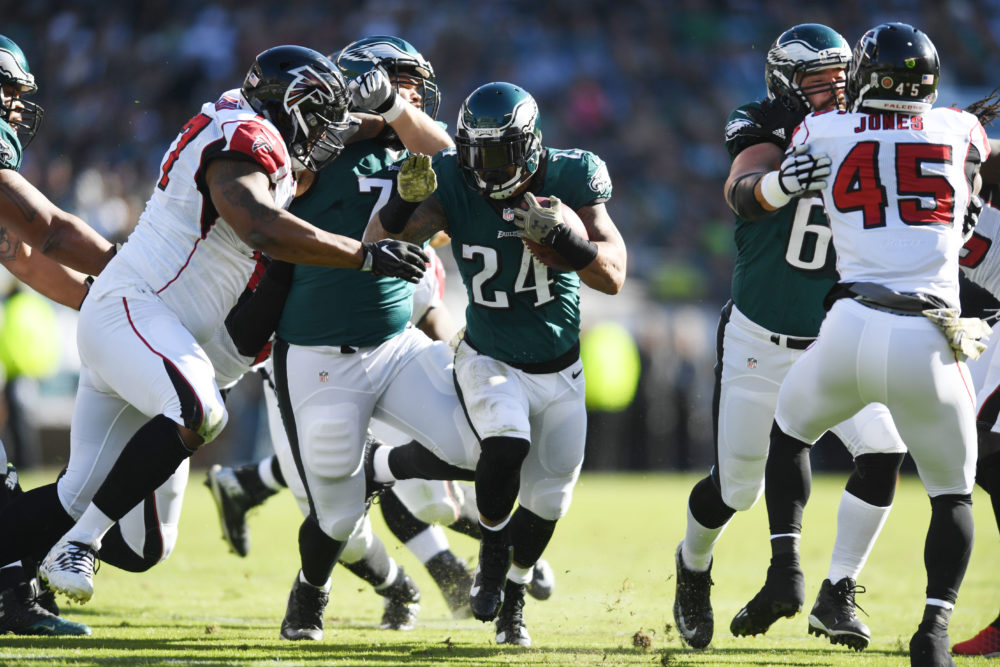 It’s always refreshing to see a dominant performance on both sides of the ball against a playoff team and possible Super Bowl contender and that’s exactly what we saw on Sunday. The Eagles defense was able to hold the Falcon’s offense to field goals for most of the game and the offense was able to control the ball for 38 minutes on Sunday as they rammed the ball down the Falcons throat. I’m going to step away from how I usually approach this (I usually select a player or group) and breakdown a lot of key plays that lead to a dominant overall team performance.

Last week I talked about WRs getting help from Doug Pederson’s schemes to help get open. The Falcon’s, who play a lot of Cover 3, go Cover 2 man here. Usually the best play call against man is some sort crosser or a corner route. We’ve seen Doug use the corner route very effectively against Cover 2 whether it be zone or man. I have to give Matthews’ credit here though, before he breaks you can see him leaning in like he’s going over the top but ultimately breaks to the corner to create separation, making it any easier throw for Carson Wentz.

This play was a thing of beauty on both Ryan Matthews’ and the offensive line’s part. It’s a split zone run and the line does a good job double teaming and blocking down. Running behind Center Jason Kelce, Matthews is able to break this one for 20. Credit to Matthew’s patience. The safety came up and played the B gap in between Vaitai and Brandon Brooks and Matthews could’ve tried to bounce this outside but he followed the design and waited for a lane to open up and it did.

Here again we see a great play designed to attack Cover 3. Greg Cosell of NFL Films broke this type of play down last week when discussing how teams have attacked the Atlanta Cover 3, but essentially it sends a man deep on the deep over route with the receiver at the top of the screen cutting in, pulling the defender in the middle of the field up, freeing a throwing lane for Wentz and he finds an open Jordan Matthews. This is unique as opposed to how other teams have had success because their wide receivers have been able to get open on the deep over route that you see Agholor running at the middle towards the bottom of the screen. Unfortunately, Agholor just can’t get open for more yards.

Just an awesome job here from Stefen Wisniewski and Jason Kelce here. Youll see Kelce do what he does best as he pulls around and drive a Falcon defender 10 yards down the field on this Wendell Smallwood run. Wiz does an awesome job of holding his block and pile driving him to ground as Smallwood kicks this out further to the sideline for around 15 more yards. One thig I have to compliment the Eagles on is their offensive line depth. They’re without two starters but Wiz and Vaitai have been serviceable, and maybe a little more. I would love to see Wiz back next year. He’s younger then Barbre who will be in the last year of his contract and has the versatility to play center and guard.

Here a hole opens up in the middle and as a Falcon defender tries to close Smallwood bounces outside before Keanu Neal eventually brings him down. If Smallwood would’ve been able to bounce to the outside of Dorial Green-Beckham who is blocking downfield he may have been able to pick up a few more yards if DGB is able to hold his block on a much smaller defender.

Here the Eagles run a mid-zone run, with the line blocking down on the right side, drawing in the Falcons defense leaving Ryan Matthews one-on-one in space against Neal who doesn’t take the best angle on the tackle. I also want to point out number 73 Isaac Seumalo who is lined up at left tackle. He holds his block nicely giving Matthews that lane to cut back on if he so chooses.

Here we have another good route combination against man coverage. You’ll see the HB run a wheel route and the receiver in the slot run a shallow crossing route bringing the Falcon’s defense up on him instead of playing a little deeper. It’s a tight window for Wentz but he throws a tight spiral into Ertz who is able to get a step on the defender and pick up almost twenty on the play.

This play ultimately ended up as a drop from Jordan Matthews, but he was wide open. Here we see the Eagles attack the Falcons with the same look I mentioned earlier. They have trips to the right side of the field with the exact same route concepts they used to attack the Cover 3 before. The only difference is the slot doesn’t break on his route quite as much, but Matthews is still wide open with the nearest defender about five yards away from him. I don’t know if he expected Wentz to lead him a little more, but it was a really nice throw that and an incompletion that Matthews made harder than what it needed to be. I’m starting to wonder how much Matthew’s body control has to do with his struggles.

I honestly can’t say I expected such a low point output from Atlanta but I have to give the defense credit for that. The Falcons line is improved and has played very well but they weren’t up to the challenge that the front seven brought.

Here we see the Eagles blitz six. I’ve talked about Jordan Hicks a lot this year because he’s been a stud but the patience he shows here to wait for the line to open up before blitzing up the middle takes away the ability for Ryan to step up and he has to throw it earlier than he would like. Credit to Nolan Carroll for good coverage on the play. The Eagles weren’t afraid to single cover Julio, playing a high safety on this play without cheating him over.

I can’t stress how key the defensive awareness is here. They don’t bite on the fake to Freeman or the end around and stay in their lanes. Ryan has nowhere to go and forces a throw that he shouldn’t have that falls incomplete.

Wow, did we ever miss Bennie Logan? Bennie absolutely sheds Alex Mack who can’t block down and blows this one up as Connor Barwin cleans it up. Bennie’s impact was felt all day long and I hope he can stay healthy. When Logan isn’t healthy it allows teams to double down on Fletcher Cox. Look for both Cox and Logan to start blowing up offensive lines in the middle if they can stay healthy.

Brandon Graham does it again here. He absolutely blows Ryan Schraeder off of the line and forces Ryan into Connor Barwin. The Falcons line had no chance on this play and that is further evidenced if you look closely at the right guard holding Fletcher Cox on the play.

This is another example of how the defensive line assisted one another in the sack department. Mack blocks to the left so Graham and Cox get one on one matchups. In no situation do you as an offense want Fletcher Cox and Brandon Graham one-on-one on the same side of the line but that’s what happens here. Cox defeats the right guard easily and forces Ryan right into the arms of Brandon Graham who was putting Schraeder into Ryan’s lap.

Here is Fletcher Cox again. Being blocked down he’s able to push the linemen back into Ryan’s sight of direction. The coverage the left side of the field was awesome as well. Cox forced that throw earlier than Ryan wanted, but even if he had extra time I still don’t believe he would’ve been able to complete the pass.

Matt Ryan looks for the intermediate route but Jordan Hicks does a good job recovering and taking this away. Ryan then looks deep and doesn’t like the look. This forces Ryan up and Bennie Logan is able to pressure Ryan into a grounding penalty. If Ryan had looked to Freeman in the flat he may have been able to avoid the grounding and pick up some yards.

Each week I do this I notice some of the same things along with new wrinkles. Over the halfway point I have to commend Doug Pederson and his coaching staff. They’ve taken a group with glaring weaknesses and helped mask those with schemes and playcalling. If they can keeping scheming to strengths of this team and marginalize coaching mistakes, I fully believe they can beat anybody in the league which bodes well as they’ll need to do so in order to make a playoff push.