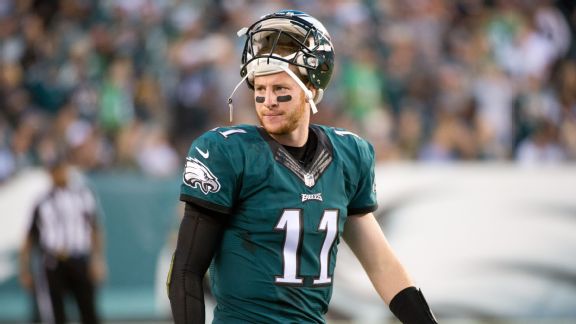 The Eagles take on the Atlanta Falcons today. For many, this game has a lot more meaning than just the Eagles and the Falcons. Fantasy football has taken over the world. Fantasy playoffs are just around the corner. If you have any Eagles players on your roster, here are the ones I would start and the ones I would sit.

QB: Carson  Wentz- We are talking about a Falcons team that ranks 31st in pass defense. Opposing quarterbacks average about 22 fantasy points against the Falcons, that is a week ten high. With that being said, Wentz has the best fantasy matchup this week at the quarterback position. If you do not have one of the top quarterbacks, he is a must play.

RB: Darren Sproles- He has been the Eagles lead back the last two weeks. I think he will get you a decent amount of points rushing, but his ability in the passing game is where you will reap the most benefits. The Falcons have allowed 71 receptions for 550 yards to running backs. Also, on average running backs score around 20 points against the Falcons. I expect Sproles to have a solid fantasy day.

WR: Jordan Matthews- Matthews is starting to come alive now. Especially in a PPR league, Matthews has been really effective. Against the 31st ranked pass defense, I expect Matthews to feast. Expect a lot of receptions and yards for him.

TE: Zach Ertz- Coming off of a solid game versus the Giants, Ertz looks to keep his hot streak going. By now, we know the matchup is very good. Wentz is going to keep feeding Ertz and together the two of them will make a nice fantasy duo. I expect Ertz to lead the team in receptions today.

RB: Ryan Mathews- It is clear he is not the Eagles lead guy. The last two weeks he has only had nine carries. He is not going to get a lot of work. However, he might get a goal-line touchdown, he has done that the last two weeks. But, if you want a big workload from your running back, stir clear of Mathews.

WR: Dorial Green-Beckham and Nelson Agholor- Yes, the Eagles have a very good matchup for their passing game, especially in fantasy. In a PPR format league, the Falcons give up on average 26.1 points, that is the fourth worst in the NFL. I do not expect either of them to get those kinds of numbers. If desperate, Green-Beckham might be an intriguing play. But, the last few weeks we have seen a very disinterested and lazy Green-Beckham.

DST: Eagles- The Falcons have the best offense in the NFL. The Eagles do have a defense that has the ability to shut the Falcons out and score a touchdown, but it is still a risky play. If you could stir away from them this week, I would.

WR: Bryce Treggs- Treggs is the Eagles deep threat. This week the Eagles came out and said they want to get him involved more as well. There is always a possibility we see a big day from Treggs. He definitely showed a lot of potential versus the Giants. In the worst case scenario, Treggs might be a sneaky play.