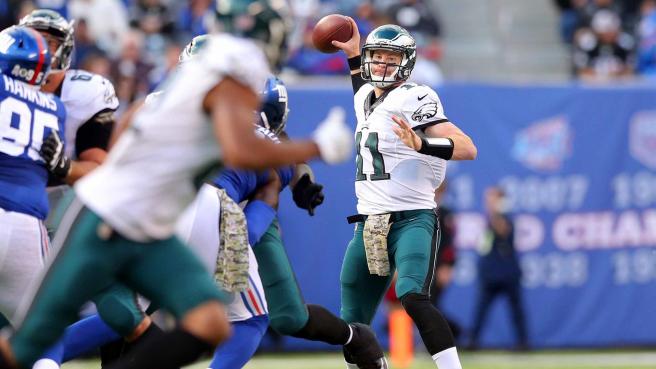 Isn’t it a breath of fresh air to see the ball moving down the field or to see receivers getting open and making plays? A week after attempting one pass of 20 yards or more the Eagles opened up the playbook against the Giants. The result? A whopping 13 plays of 15 yards or more. While receivers were open, that wasn’t entirely their own doing. Doug Pederson deserves a lot of credit for what he has done in the play design department and we’ll dive into that and much more.

After two early interceptions you would expect Pederson to try and take the ball out of Wentz’s hands a little, but that wasn’t the case. Here we say a play action fake where Wentz does a nice job selling the toss. The play fake freezes rookie cornerback Eli Apple long enough for tight end Trey Burton to gain enough separation for a really nice gain that could have been for more had he not stepped out of bounds. Play action would go on to be a huge factor in nearly all of the Eagles chunk plays on this afternoon.

Here again we see play action. Landon Collins needed to drop deeper to take away this throw to Ertz. It looks like there was miscommunication on the Giant’s part as Jordan Matthews takes Janoris Jenkins down the field to clear out that corner for Ertz. This was a good play design that Doug ran all day long and worked more often than not. Once again, if Collins plays a little deeper it probably takes the throw to Ertz away but due to the receivers running post routes across the field nobody behind Collins is able to pick Ertz up.

Wow, is this something the Eagles have missed, a man to take the top off! The Giants played this route well, sometimes you just can’t beat speed. Bryce Treggs just flies by the defensive backs here. The drive ultimately ended in a touchdown, but if Wentz is able to put just a little more under this it’s probably another 70+ yard TD. There’s not a lot to breakdown here but one thing of note is that even if Treggs hadn’t been able to create the separation, Wentz had Zach Ertz wide open on the corner route again for another chunk play. It was a built in safety blanket after the line picked up the blitz. Ultimately Wentz made the right decision and I assume he has the arm to lead Treggs a little more, but it was a very windy day and Eagles QBs often had the problem of underthrowing Desean Jackson as they were meshing with him. I expect more reps will help the chemistry if Treggs is the long term answer to the deep threat question

This was placement by Carson Wentz on the throw to Jordan Matthews. DRC was playing Matthews tight, but Wentz was able to put the ball on the back shoulder where only Matthews could make a play on it. This read was the only one that opened on the play as the Giants were able to take away everything underneath. It was nice to see Matthews hang onto this one, but comparing this to the Eagles final play of the game, you can’t help but think that if Carson had been able to place that ball a little more to the inside that Matthews makes a catch similar to the one he did here.

Here you see the effect that Bryce Treggs has on the defense. Both safeties are playing 15 yards back from the line of scrimmage. Treggs runs the go route, the slot corner drops into the flat to cover Sproles leaving Jordan Matthews wide open on the corner. Treggs’ speed forces the safety to drop another 10 yards after the snap giving Wentz and Matthews more room to operate with. Matthews made this a tougher catch than it needed to be but these are the kind of things I was talking about with Pederson’s play design. His play-calling may come as questionable but to sit and watch the route concepts and designs that he has formed to help a struggling group of receivers get open speaks volumes to his coaching ability.

This play was incomplete but had all of the potential in the world to result in points before halftime. New York does an excellent job in coverage taking everything away, but after the play breaks down there is nobody behind Darren Sproles on the left side of the field. Wentz tries to direct Sproles up the field because he recognizes this but Sproles never breaks. If he had, there’s a possibility for another play like the TD in the Pittsburgh game, although I believe in this scenario Sproles likely gets tackled out of bounds around the Giants 25-yard line in order to preserve clock.

I murder Agholor every week, and justifiably so, but he made a really nice play on what likely should have been a gain for only a yard. Yards after the catch were a reason I was high on Agholor. I thought he would be an elusive receiver who could get separation. So far we haven’t seen the separation, but here is the elusiveness. A disclaimer I would like to add is that Eli Apple who was in coverage on the play was extremely bad all afternoon. He surrendered the big gain to Burton, did not break outside in time on the Ryan Matthews TD run, and did a poor job at tackling here on a play that led to a Kenjon Barner touchdown. If Apple can’t improve (he’s been benched this year once already) it could be a fun time in the NFC East over the next few years.

Here we see the Giants defender hesitate on pursuing Sproles. We saw all afternoon that the Giants read the QB runs extremely well all afternoon, but running them causes hesitation. Here LG Stefen Wisniewski gets out and makes an excellent block while LT Jason Peters is able to hold Jason Pierre-Paul off long enough for Sproles to get the outside edge. If Dorial Green-Beckham is able to hold his block on Apple a little longer there’s a chance Sproles picks up a few more yards here.

Here Agholor running the underneath crossing route sucks the defense in, opening Zach Ertz up across the middle of the field. Once again this a great play design because it gets the defense moving in one direction, but look at the bottom of the screen. After Ertz come across the middle the Giants completely abandon the right side of the field and after chipping in pass protection Sproles leaks out again with nobody there to cover. Now there’s a chance the Giants make a play on Sproles to knock him out around the same spot Ertz went down, but I like the prospect of what Sproles can do with the ball in his hands as opposed to what Ertz can. Regardless the coaches did a good job getting Ertz involved and keeping him involved all game long.

Once again the Eagles use play action to get their tight ends open. The linebackers are sucked in and Ertz is able to run a really nice route here and get separation on the break. Ertz getting a clean break is crucial because it affords Wentz a little leeway on the throw with pressure in his face. The running game wasn’t particularly effective on Sunday but play action helped freeze the Giants defenders all afternoon long.

Here on a crucial 4th down Jordan Matthews is able to find a soft spot in the corner and Wentz delivers a perfect ball with very little traffic in the area. This was another good play call against Cover 2. Agholor draws a lot of attention from the LB and corner, as the corner DRC comes up to make a play on who he believes the intended target is. This leaves Matthews wide open in between the safety who has to respect the go route and the corner who is playing a shallow flat.

There have been some questionable decisions and play calls over the course of the last few games, but we have to realize that Doug is a rookie head coach that is still getting a feel for things. He is working with a limited roster but the play calls and route concepts demonstrated in this game exemplify some of his best areas. Only a week after dinking and dunking down the field each drive against Dallas, it’s refreshing to see that Pederson can make adjustments to get the most out of what he has.