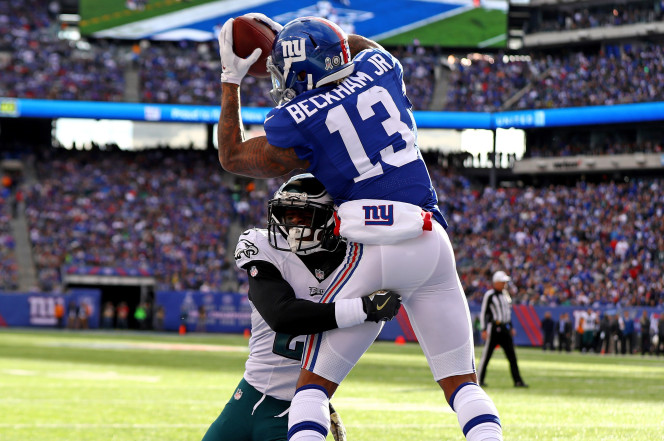 Sloppy Effort drops Eagles to 0-3 in the NFC East

Sunday was not the finest for rookie duo Doug Peterson and Carson Wentz and it ultimately cost the Eagles a win. Coming in with an 0-2 record in division play, the Eagles despearetly needed to win at MetLife Stadium to prevent falling to last place in the division, and failed to do so. After two interceptions on Wentz’s first three passes of the game the Giants were able to take a quick lead that the Eagles were never able to overcome.

The First Giants touchdown came after safety Landon Collins returned the first Wentz interception to the Philadelphia 31 yard line. Two plays later Giants QB Eli Manning hit WR Odell Beckham Jr. on a pass across the middle for a 26-yard touchdown. On the next drive Wentz overthrew WR Dorial Green-Beckham and the pass was intercepted by the Giants other safety Andrew Adams and returned to the Philadelphia 30. Three plays later Manning found a wide open receiver in Roger Lewis after Eagles defensive backs Leodis McKelvin and Jaylen Watkins ran into each other.

On the next drive Wentz was able to hit on a few plays but ultimately the Eagles settled for a field goal, something that they should’ve done several other times this afternoon. After forcing a punt and driving down the field for to the NYG 23, The Eagles went for it on 4th and 2. While the decision wasn’t as questionable at the time, the play call was as the Eagles lost four yards on a designed QB sweep. After forcing another punt, the Eagles were able to open their next drive with a 58 yard pass to rookie WR Bryce Treggs and two plays later they scored on an eight yard Ryan Matthews TD run. The very next drive saw the Giants drive 86 yards downfield and answer with a TD of their own. Two drives later the Giants were forced to punt and returner Darren Sproles returned the ball 66 yards to the Giants 15. This field position was wasted, as the Pederson elected to once again go for it on 4th and 1, running the smaller Sproles over the bigger Matthews and the Giants were able to force the stop.

The Eagles had one more shot to put points on the board but DE Jason Pierre-Paul blocked a 40 yard field goal attempt and the bird went into the half down 21-10. The teams traded touchdowns on there opening drives of the second half as the Eagles and Giants marched 70 and 75 yards resepctively but two Philadelphia field goals sandwiching an Eli Manning interception cut the Giant’s lead to 5 points at 28-23.

The Eagles had one final chance after second year linebacker Jordan Hicks was able to intercept Manning deep in Giants territory, but after a 17 yard catch from Nelson Agholor, the Giants blitzed on the next three plays forcing a 4th and 10. On 4th down Wentz threw to Jordan Matthews who had position on the Giants defensive player had he broke to the corner, but he never did and the pass fell incomplete.