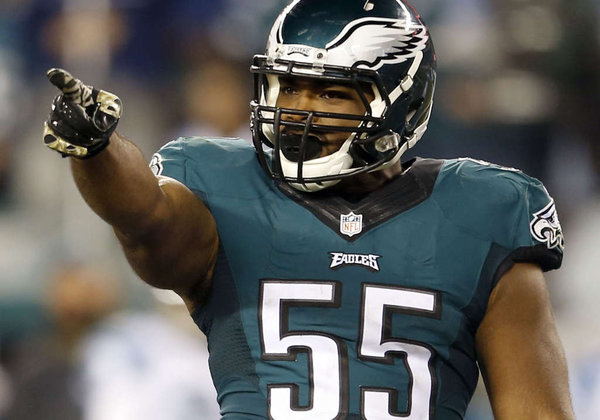 Is Brandon Graham the best defensive end in the league?

Each season there is a player who breaks onto the scene. However, this year it is a little different. Brandon Graham didn’t just break into the scene, he might be the best in the scene.

When Jim Schwartz came to town, the Eagles transitioned back into a 4-3, wide-9 scheme. This is the natural scheme for Graham. Instead of playing outside linebacker like in years past, Graham was now a defensive end.

Graham has been a wrecking ball in the trenches. It seems every game he manages to wreck havoc on the opposing offensive line.

Graham is also very good in the run game. He is not just a stellar pass rusher. On numerous occasions, Graham sets the edge, which forces the runner into the arms of guys like Fletcher Cox and Bennie Logan. Graham is also seen chasing running backs down the field and making the tackle.

Do you think he is the best edge rusher in the NFL?  To be fair to him, every game he goes out and dominates. Graham went from being the underachieving first round pick to the focal point of the Eagles defense. Every game, you know Graham will show up.

This week, the Eagles take on the New York Giants. Graham will have no problem getting to Eli Manning. We all know what happens when Manning is pressured. Expect another dominant performance by Graham. Graham is making a big name for himself this season.

Right now, the Eagles have a very good defensive end in Brandon Graham. Is he the best? I do not know yet. I do know he has been very good this season and if he keeps it up, he is looking at the Pro Bowl and the All-Pro team.