Whether you play FanDuel or Draft Kings, daily fantasy football is a blast. While there are a bunch of different games you can play within each of those respective sites, I’m going to give an advantage for playing in a 50-50 league. While you probably don’t have as much of a chance at winning a decent amount of money, it gives you the best chance to succeed on a weekly basis.

Analysis: While he is unproven, Osweiler will face off against a Bears defense that could be a little shaky early in 2016. Osweiler also has an upgraded arsenal of offensive weapons.

Philadelphia Eagles running back Ryan Mathews (24) runs against the Indianapolis Colts during the first half of an NFL preseason football game in Indianapolis, Saturday, Aug. 27, 2016. (AP Photo/AJ Mast)

Analysis: Johnson will get the ball early and often as the Cardinals leading back. The power back will go up against a defense that will be without some key pieces, especially in the front seven.

Analysis: The Browns defense could be absolutely dreadful. Mathews will get the call in goal line situations. Expect anywhere from 60-80 yards and a possible touchdown.

Analysis: Hopkins is the best receiver this week for the money. While more offensive firepower was added to the Texans offense, he will still be the main target for Osweiler

Analysis: Maclin is cheaper than he should be, especially against this Chargers defense. Jamaal Charles could be out so the passing attack could see a little more action than normal. 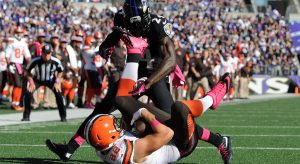 Analysis: Once again, a receiver going up against one of the worst defenses in the league. Cooper is the big threat in the Raiders aerial attack so expect a big day from the second year pro.

Analysis: Every quarterback needs a reliable safety blanket, and Barnidge is just that for RGIII.

Analysis: The Lions will move the ball enough to get into field goal range consistently, but may have a hard time punching the ball in for six. Prater should see two or three field goal attempts.

Analysis: The Eagles defense was on fire in the preseason and is going up against a Browns offense that has a shaky line, no real threat at running back and unproven wide receivers.