If you look around the Eagles defense, it’s deeper and more talented than it has been in a while, arguably since Brian Dawkins left for the Denver Broncos. Notice I didn’t say “Dream Team” because, well, we all know how that turned out. The defensive line has been extensively covered, on a national basis, with some experts calling that group the best line in the NFL. Going back to the back end, Malcolm Jenkins was given a counter part in Rodney McLeod Jr. who can finally play up to Jenkins’ level. That tandem at safety has also drawn rave reviews by some (but are alos underrated by some).

For as many answers that both the line and the safeties can provide, that many are raised when you peer into the depth chart at both linebacker and corner. Do both positions have enough talent their to stand on their own and really make this defense great again? Most definitely. But both units could also cause this defense struggle and remain in the middle of the pack or lower based on other defenses around the league. Let’s take a look at  the corners to see if they can hold their own and be good enough to make this secondary a force, and in turn ramp up the production on “D.”

New Defensive Coordinator Jim Schwartz brought in a couple of guys who would be familiar with his system in Leodis McKelvin and Ron Brooks. When they were first brought in, it was generally labeled a depth signing, especially for Brooks. As camp progressed however, both guys find themselves in line for extensive playing time due to the inferior play of second year corner Eric Rowe and the lack of starting level talent beyond him. 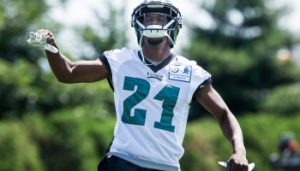 McKelvin is a former first round pick out of Troy who has played in 98 career games over eight years. His best year of those eight came when his coordinator was, you guessed it, Jim Schwartz. That year was cut short after ten games due to injury, but by the time week 11 rolled around, he recorded 45 solo tackles, forcing one fumble and intercepting four passes. Now in preseason week 1, McKelvin got beat a couple of times in very limited action, so the initial eye test results may have come back a little shaky, but by the time the season rolls around I fully expect him to have an outside corner spot calling his name. His play should get better as the preseason progresses because  the cohesion and communication should only get better throughout the back end. If for some reason he doesn’t progress, the secondary could be in deep trouble right out of the gates.

Ron Brooks is the other guy I mentioned that has experience in Schwartz’s system. While he is also experienced and has been around the block, look for him to start in the slot this year or potentially by the fourth guy in on sub-packages. While he was at LSU, he played mostly in their dynamic secondary while they were in nickle and dime packages, so he has a ton of experience in that area both from college and his time in Buffalo. The knocks on him are he get’s sucked up on play action passes and pump fakes, but if he is mostly playing in passing situations, that tendency should be negated. He fit’s the bill as a slot corner or fourth guy in who can also excel on special teams.

Perhaps the best deal and the biggest deal of the off-season came when the Birds re-upped with corner Nolan Carroll. Coming off a broken ankle, Carroll had a hard time finding a deal that he thought was fair, so he decided to bet on himself and sign a one year deal to stay in Philadelphia. In 2015, he was undoubtedly the Eagles best corner until he got hurt. He has a big body and good strength so he can play in press or man, and do both with a certain level of physicality. As long as he is 100%, Carroll should earn a starting nod alongside McKelvin.

So if McKelvin and Carroll are your starting corners, that’s an average tandem with the ability to play above average over a period of a couple games here and there. Brooks provide’s solid depth, but what happens if there’s an injury? That’s when Eric Rowe becomes the linchpin to  this defense. In the 5 games that he started after Thanksgiving, you could see Rowe progress each and every game, so it may be a little confusing to hear  the bad reports coming out of camp from the reporters. Take their words with a grain of salt.

Schwartz has already stated that he thinks Rowe will be a good corner in this league, and bear in mind that this is only his second year and he is in his second system. As fall turns into winter, if Brooks is the starting slot guy, I expect Rowe to make a push for his spot.

The top four are pretty much set whether it be due to the amount of resources invested or experience in the system, so what’s the future look like at the position? Jalen Mills, I predicted, was going to push for a prominent role by the end of the year. After seeing his first preseason action where he struggled on both defense and special teams, we need to pump the brakes. While he did make a bunch of mental errors, he is just a rookie. If the guy’s in front of him stay healthy, view this year as a red-shirt year for Mills. Does he have potential? No doubt, but look for him to really capitalize on that come 2017.

JaCorey Shepherd and Randall Evans, two late round draft picks last year are both pining for a spot on the team, but look for one, if not both, to be cut. If that’s the case, I expect Shepherd to get assigned to the practice squad. Undrafted second year corner Denzel Rice and former Canadian Football player Aaron Grymes are also looking for a chance to wear the midnight green in 2016.  Between those four guys, look for just one, maybe two, to make the roster with another making the practice squad.

The cornerback room has a nice blend of veteran experience to go along with young, hungry talent. So to answer the question in the title, the corners have enough talent to carry their fair share of the load on defense and while they may struggle a bit at times, look for them to have a year where they can  build up to a more productive year in 2017.