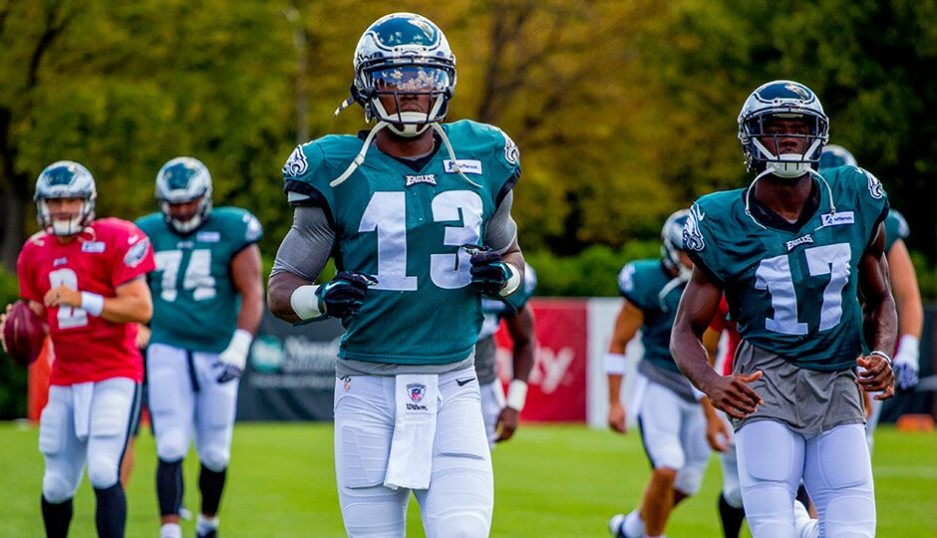 3 players with the most to gain in the preseason

Every year, across the entire NFL, jobs are won and lost during the preseason. Last year, the Eagles Kenjon Barner forced his way onto the 53 man roster with a couple of great punt returns and impressing in the rushing attack. With tonight being the first of the four preseason games, who has the most to gain over these games? Let’s take a quick look at who can really force their way into a big role with the 2016 Eagles.

Byron Marshall has a chance to really make a splash in the first two weeks especially. Ryan Mathews and Darren Sproles won’t see the field after the first two or three drives and Kenjon Barner could very well be sitting on the sideline the entire second half. In Kansas City, Doug Pederson got production out of his third and fourth backs last year after injuries depleted the entire position.

If Marshall, an undrafted free agent out of Oregon, can really impress during his extended time during the preseason, he should be the front runner to be the fourth back if Pederson decide’s to go with four. Worst case scenario, Marshall get’s put on the practice squad and best case scenario Marshall forces the coaching staffs hands and makes them go with four man backfield. Side note, Marshall will also have to produce on special team’s to really have a shot at the final 53.

We stay in the great state of Oregon for our second “boom or bust” guy. Unlike in the Chip Kelly era, 15% of the roster won’t be a former Duck, however, Josh Huff does need to make the most of this preseason. Huff has had many more “downs” than “ups,” but with a new regime leading the way he has a chance to make a good first impression. Jordan Matthews will be back for the third preseason game at the very earliest, and he may not make it back until the start of the regular season.

With a good preseason, will Huff work his way into the starting three receivers? That may be a stretch. However, he does have the chance to make the leap from roster bubble to fourth receiver who  rotates in for the starters and plays during four and five wide-out sets. Pederson has said he like’s Huff’s ability to make plays with the ball, so if he pieces everything together over the next four weeks, he really has a chance to work his way into a 20 snap per game role.

Myke Tavarres, an undrafted rookie out of Incarnate Word during warm-ups in Training Camp.

For the last guy that made the list, we go back to the undrafted free agents who signed a day after the draft and switch over to the defensive side of the ball. Myke Tavarres, a product of University of Incarnate Word, has a real shot to make a difference and make the team. It has been well documented how little depth the Birds have at linebacker. As was aforementioned, the starters will not play into the second quarter these next two weeks and may not play at all in the fourth game. Tavarres will get a ton of playing time along with fellow rookie Joe Walker who was a 7th round pick.

Due to Walker being drafted, he should have a good shot to make the team, so it is Tavarres who has a lot at stake. In college, he showed pretty good athleticism and has a great motor with the speed to really make a difference. Combine those skills with great reactions and he has all the makings to be a solid ‘backer in this league if he can continue to improve throughout camp and training camp.

If you call yourself a true Eagles fan, the preseason is a chance to see tthe underdog make a push and force his way onto the roster. It is truly something to watch to see someone fighting for that coveted open spot or two.

Also, keep your eyes on these guys who are also on the bubble. Kicker Cody Parkey, Cornerback’s Randall Evans and JaCorey Shephard along with defensive lineman Steven Means to name a few.