Like the last position that I covered, which was tight ends, both the defense/special teams and kicker positions could have a big impact on your team. If you have just an above average fantasy roster but have the best defense and kicker in fantasy, that alone could make you a contender for your league’s title. Most of the time, these are pretty obvious choices, but let’s take a look at the top 12 in both defense and kicker (based on a 12-league format), and we will start with the defense first.

Jacksonville Jaguars – The Jaguars, much like the next team on this list, saw a lot of talent come in over the offseason, and the defense looks poised to be great down the road. Rookies Jalen Ramsey and Miles Jack are elite prospects, Malik Jackson came into town from Denver, and Tashaun Gipson bolsters the secondary. Grade – 10th round 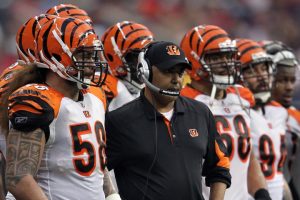 Bengals coach Marvin Lewis and linebacker Rey Maualuga (58) look on during a game in 2015.

Oakland Raiders –  The Raiders D saw an influx of talent during the offseason. Rookie Karl Joseph is joined by veteran safety Reggie Nelson and a solid corner in Sean Smith. Bruce Irvin bolsters a solid linebacking corps that already includes Khalil Mack. The Raiders defense could be scary good. Grade – 10th round

Cincinnati Bengals – Vontaze Burfice and Geno Atkins give the Bengals nice pieces in the front seven, but Reggie Nelson left in the secondary (George Iloka did re-sign wit hthe team). Look for them to be a solid defense, but nothing spectacular. Grade – 10th round

Philadelphia Eagles – The question marks for this defense are rampant due to a new philosophy, lack of depth at linebacker, and question marks at corner. The defensive line is one of the best in the league, likewise for the safeties. The special teams play is what puts the Eagles on this list as Darren Sproles has made the past two Pro Bowls as a special team player. Grade – 9th round

Minnesota Vikings – Last year the Vikings  gave up 344 yards per game, however, their defense has a ton of young talent that is just beginning to learn and grow together. Anthony Barr and Eric Kendricks are a great linebacking tandem and Harrison Smith is a Pro Bowl safety. Look for 2nd year corner Trae Waynes to make a big leap in 2016. Grade – 8th round

Houston Texans – Normally they’d be a lot higher, but the injury to JJ Watt is why the Texans are so low. Jadaveon Clowney needs to show why he was the top pick a couple years ago, or the Texans could slide even lower on this list. How long will Watt be out and when he comes back, how good will he be? Those questions all could have less  than favorable answers. Grade – 8th round

Carolina Panthers – The Panthers have key players scattered throughout their defense. Luke Kuechly and Thomas Davis lead the charge at linebacker while KaWann Short and Star Lotulelei anchor the line. Josh Norman is gone, so their are some concerns in the secondary. Grade – 6th round

The Jets Darrell Revis (24) celebrates an interception with Buster Skrine (41) and Calvin Pryor (25).

Arizona Cardinals – The Cards are a defensive that always seems to add pieces. They traded a former first round pick at guard and acquired outside linebacker Chandler Jones from the Patriots. They already had a pretty good secondary, so with Jones added to a good front, the Cardinals leap into the top 5 in terms of fantasy defense. Grade – 6th round

New York Jets – Unlike the next two teams, the Jets find  themselves on this list mainly due to their front, especially the line. The front seven was mainly responsible for holding apponents to an average of 83 rushing yards per game. While they do have Darrell Revis in the secondary, their main calling card is  their front. Grade – 5th round

Denver Broncos – Denver lost starters Malik Jackson and Danny Trevathon while Demarcus Ware continues to  get older. They still have a top secondary to go along with Von Miller, but expect their numbers to dip just a bit from those two big losses. Last year, the Broncos gave up under 200 passing yards per  game, which is unbeliebable in today’s passing oriented NFL. Grade – 5th round

Seattle Seahawks – The Bronco’s lost some big pieces, so Seattle is primed to return to the  top of the food chain in  terms of defense. Their elite secondary and stout front seven have Pro Bowlers littered throughout, making it very hard to move the ball. Seattle should be the best defense for the past 3 out of 4 years. Last year the ‘Hawks gave up 292 yards per game. Grade – 5th round

Josh Brown – The Giants kicker booted 30 balls through the uprights last year, which had him tied for 6th in the league. He was perfect from beyond 50 yards, while his only two misses came in between 40-49. Grade – 10th round 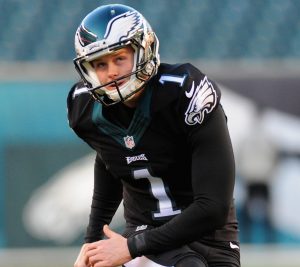 Cody Parkey watches one of the ball’s he just kicked during pregame warm-ups in 2014.

Graham Gano – Like a lot of kickers on here, Gano kicked 30 field goals last year. I expect that number to jump just a little bit due to the offense being boosted by the return of Kelvin Benjamin. Grade – 9th round

Cody Parkey – Parkey was a Pro Bowler in his rookie year back in 2014. He was put on the IR early last year with a groin issue. If he can regain his rookie year consistency, he will be one of the better kickers in the league for years to come. Grade – 9th round

Brandon McManus –  McManus has a big leg, hitting on all but two of his 50-plus yard chances (5-7).  I expect the Broncos offense to struggle, so he may not get as many opportunities as he got last year. Grade – 8th round

Roberto Aguayo – Perhaps the best kicker in college football history, Aguayo was taken in the 3rd round of the NFL draft which is unheard of. He comes into the NFL as one of the better kickers, and he is just a rookie. Grade – 8th round

Chandler Catanzaro – Catanzaro should benefit from a pretty potent Cardinals offense. Catanzaro was perfect within 40 yards last year, and was 6-9 beyond 40. That’s a pretty solid sophomore year. Grade – 7th round

Cairo Santos – Another kicker of spanish decent, Santos has been solid  throughout his career. In 2015, he kicked a respectable 30 field goals, four of which were over 50 yards. I expect nothing to change in 2016. Grade – 7th round

Chris Boswell – Is Boswell a member of the “Killer B’s?” I don’t know, but I do know that he will get plenty of opportunities to kick field goals as the Steelers should move the ball better than anyone else. Grade – 6th round 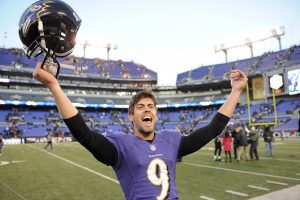 Justin Tucker celebrates after winning a game in Baltimore during the 2014 season.

Blair Walsh – Yes, Walsh did miss the biggest kick of his life, but that should be put in the deepest and darkest spot in his memory. He was solid throughout 2015 and Minnesota moved into an indoor stadium, so his home games won’t be affected by nasty weather. Walsh was 6-8 from 50+. Grade – 6th round

Stephen Gostkowski – Gostkowski usually racks up the most fantasy points, but with Tom Brady out for the first quarter of the season, his numbers take a little hit and he slides down to 3rd on the list. Grade – 5th round

Justin Tucker –  Tucker can absolutely smash the ball and combines that with pretty good accuracy. He has a knack for converting under pressure too. Another consistent year should be in line for Baltimore’s kicker. Grade – 5th round

Dan Bailey – Bailey will go down as one of the most accurate kickers in NFL history. Last year, Dallas ranked 6th in field goals, and that was with a lackluster offense. With everyone healthy, that number should go way up. Grade – 5th round