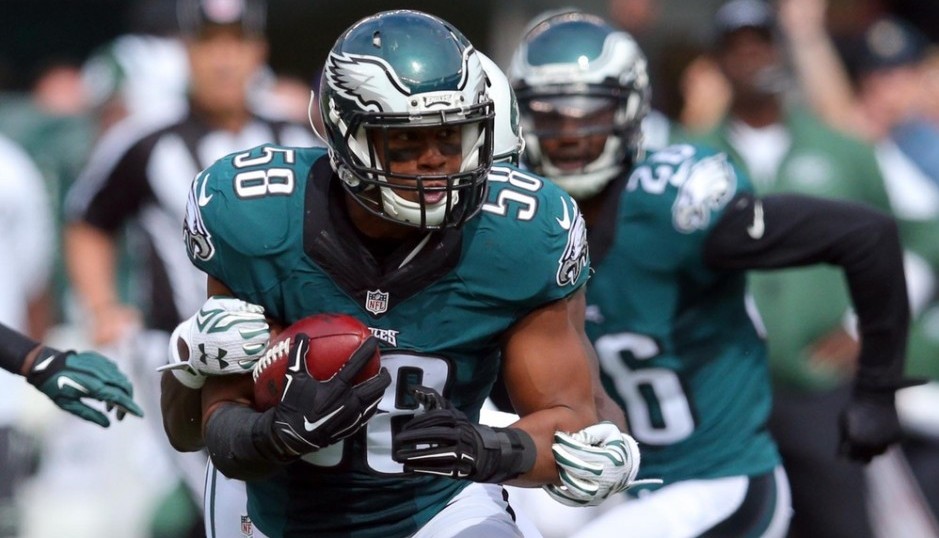 Last week I tackled the tricky task of discussing who will have a break out year on the offensive side of the ball. To be honest, this is all a mixture of gut feeling’s, reports coming from camp, and the position the new defensive philosophy will put players in. With so many new faces this may seem tricky, but I am fairly confident that we should already know who is primed for a big 2016. We will start with the line and then move back through the next two levels of the defense.

The unit on this Eagles team  that has the least amount of questions, both due to talent and depth, is the defensive line. For that reason, this could prove to be the most difficult group in which I try to pinpoint a step up player, buts lets give it a go. My prediction is none other than 4th year pro Bennie Logan, who is very undervalued around NFL circles. Coming out of college, his scouting highlights include great acceleration to go along with great movement skills for a tackle, and those two traits allow him to run down backs in the backfield and be a great interior pass rusher. I’d say they were fairly accurate.

Bennie Logan celebrates after making a tackle in the backfield during the Eagles game against the Saints in 2015.

Fletcher Cox and Logan could form a unit that ranks near the top in terms of productivity. Cox is finally getting recognized and he should take a lot of the pressure away from the rest of the defensive line. If Logan can take advantage of the offenses focus on Cox, look for his stats to improve drastically from last years (55 tackles, 1 sack), which would mean he could be in line for a big pay day come March. Other potential candidates that missed the cut are Brandon Graham (playing in a rotation) and Vinny Curry (good year ahead, but Logan’s will be better).

We go from the unit who has the most depth, to the unit who perhaps has the least depth on  the team, which is linebacker. Mychal Kendricks, Jordan Hicks and Nigel Bradham are the penciled in starters, but after that the only real option is Najee Goode. If an injury does occur, look for the Birds to give Stephen Tullock a peep. Jordan Hicks is primed to make the leap in 2016. While he was a late-comer to the starting lineup in 2015, Hicks was on the cusp of putting himself in the defensive rookie of the year discussion until, of course, he got hurt.

Injuries are the biggest concern for the linebacker entering his sophomore year in Midnight Green. He dealt with a plethora of them in college at Texas, and wasn’t able to avoid that same “bug” in his rookie year. If he is healthy though, Hicks is a great athlete who is calm, cool and collected under pressure and always seems to be around the ball. Speaking in a one-on-one with the Eagles Alex Smith, Hicks said the favorite part of the game is the “mental chess match with the offense.” Criticize Chip Kelly all you want, but down the road we may have a Pro Bowler on our hands at middle linebacker due to Kelly’s selection.

The back end has had an odd off-season. Consider this, theoretically they could have added both stability (Rodney McLeod) and a couple question marks  in Leodis McKelvin and Ron Brooks. My prediction though is none of the aforementioned players. It is a trendy pick who was drafted about 5 rounds later than he was projected due to a legal issue. If you don’t know who I’m talking about, learn the name Jalen Mills real quick. 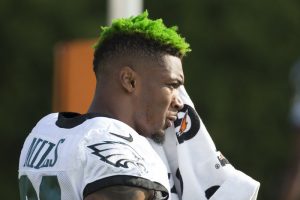 The reason Jalen Mills has been nicknamed the “Green Goblin” by his teammates can be seen above.

The “Green Goblin” has made a name for himself by standing out to the coaching staff so far in camp, and not just because he has green hair. If you’ve read my previous content, I predicted that Mills will work himself into a starting roll by the end of the year, but look for him to start out manning the slot corner position come September 11th. Mills was a four year starter at SEC powerhouse LSU, and that is no small feat in and of itself. He split time starting at both the corner and safety positions, and  that versatility could prove to be invaluable to the Eagles down the road, and perhaps even this year if there are injuries. The secondary has a lot of young talent at corner, and great leadership at safety. That combination is really something we should all be excited about.

So, a brief recap; Bennie Logan will step up the most on the defensive line, while Hicks will anchor a solid, but thin, linebacking corps. On the back end, expect Mills to use 2016 as a launching year for a potentially promising career and help the secondary return to prominence around the NFL.