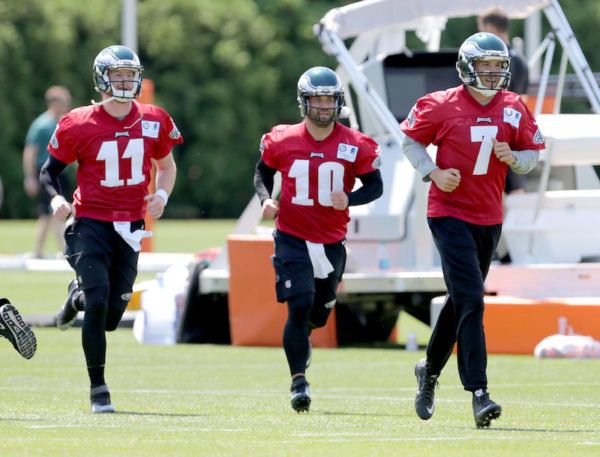 State Of The Eagles Quarterbacks

Ever since the Philadelphia Eagles traded Donovan McNabb to the Washington Redskins in 2010, the Eagles have been searching for their guy to take them to promise land.

Michael Vick took over after Kevin Kolb , Nick Foles replaced Michael Vick, and then the front office traded Nick Foles and  a No. 2 pick in exchange for Sam Bradford.  In the 2016 NFL Draft, the Philadelphia Eagles boldly moved up to the No. 2 overall pick, to select the 6-foot-5, 237-pound QB from North Dakota State, Carson Wentz.  Which leads us to the Eagles’ current situation.

Sam Bradford had an average year at best in his first season in Philadelphia. With former head coach Chip Kelly leading the way and having all the faith in the world in Bradford, the Eagles finished second in the division with a 7-9 record, Chip Kelly’s only losing season during his three year stay in Philadelphia. Sam Bradford passed for 19 touchdowns to 14 interceptions with a 65% completion percentage. Sam Bradford has a big injury history back with the Rams and with his first season in Philly nothing changed as he missed 2 games. Sam Bradford had rare times where he would layout pin point very accurate passes but for the most part he wasn’t very impressive.

With Chip Kelly  gone and Doug Pederson running the show, the Philadelphia Eagles brought in Chase Daniel to be the backup quarterback behind Sam Bradford.  In his time in Kansas City, Coach Pederson,  developed a close relationship with the journeyman quarterback, in Chase Daniel.  Coach Pederson has a lot of confidence in Chase Daniel, so much so, that he stated that “Chase will be a starter in this league someday”.   While I don’t believe Chase will become a full time starter in Philadelphia, with Sam Bradford’s injury history, Chase might get his chance to showcase his talents sometime this season.

Despite being sidelined with a broken wrist and missing 8 games during the 2015 season, Carson Wentz had a great season last in his senior year, passing for 1,651 yards, with 17 touchdowns to only 4 interceptions, and a 152.3 passer rating.  I believe Philadelphia lucked out with the LA Rams selecting Jared Goff number one overall, mainly because I believe Wentz will have the better career of the two.  The rookie North Dakota prospect carries himself well, along with an impressive dedication to his craft.

It’s obvious that the Philadelphia Eagles have their quarterback who is the future of the franchise in Carson Wentz.  However, the Eagles have no plans to throw Wentz into the fire until he’s ready. There are rumors that have been circulating, that Wentz might not even be on the active game day roster this season.   Howie Roseman and Doug Pederson have come out on several different occasions that Sam Bradford is their starting quarterback.  While at the moment, it’s Chase Daniel who has looked the best so far in training  camp.

At the end of the day, the Eagles made the right decision by drafting for the future.  With the rookie most likely sitting this season,  Sam Bradford is on the biggest stage of his career to prove the naysayers wrong.