A lot of first’s for QB Carson Wentz

Sunday’s open practice was a much anticipated event that over 18,000 people had circled on their Eagles calendar. It was a pretty exciting day for us here at 4thandjawn.com as well with the debut of our podcast and the first step of what will surely be an exciting ride for both us, and you. As fans though, we weren’t the only ones who were looking forward to Sunday’s free entertainment.

If you had asked Eagles rookie and 2nd overall pick Carson Wentz prior to Sunday if he was excited to step onto the Linc for the first time, he probably would have given you a regimented answer along the lines of “I see tomorrow as a chance to improve and get better with every rep.”  However, in his short post practice interview, even the rookie, who says all the right things, was enjoying a day of many firsts. 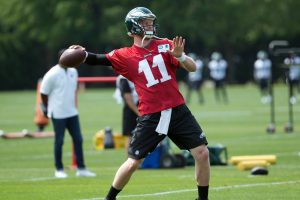 “Ah man, it was pretty cool. You know getting in the locker room, I was like “alright, this is pretty nice.” Coming out here everyone’s yelling, for a practice it’s pretty sweet, to see the support, see everybody out here, it was really exciting and I had a lot of fun.”

As you’d expect, it was Wentz’s first time to ever be in the Linc for an actual football event. Sunday allowed him to envision what game day will be like in South Philly.  When asked if he brought a little bit more to practice due to the audience, he had this to say.

“It’s exciting, without a doubt, I was a little surprised to be honest with how many people were here for a practice, I wasn’t sure what to expect. I guess I’m getting used to the craziness that this place is, its pretty special, pretty cool… Oh absolutely, its right around the corner, the season is right around the corner and uh, coming out here just to these fans screaming, I can’t imagine this place packed.”

Sunday was the first time fan’s got  to see the future face of the franchise, and those that were  there, enjoyed it. The enjoyment however, was mutual. The next big hurdle comes on Thursday, August 11th, which should be another night full of firsts for everyone, Carson Wentz included.